“Outlaw country mixed with Southern rock, mixed with toad licking,” appraises Jeff Pinkus of the rootsy, ne’er-do-well anthems on Pure Luck’s eponymous debut. “It’s got a lot of psychedelia – songs taking you to a different place than you thought you’d go. Other songs are very traditional, but somehow it all tied together.” 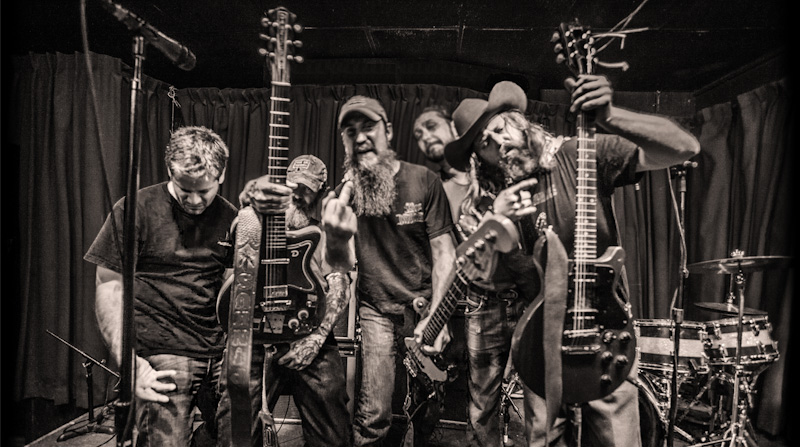 Founded in 2007 as an unwieldy two-drummer, four-guitarist country-rock chain gang, the locals eventually condensed into a svelte quintet. Of course Pure Luck’s cast of characters boast résumés whose group monikers make their band members all but unemployable in most day jobs. Consider that a NSFW warning.

The long-gestating LP, staggering forth on Heavy Feather Records June 2, presents Pure Luck as junkyard dogs of country rock where soaring, Allman Brothers-style guitar harmonies crash into ragged, soulful vocals. Today’s early offering, “Silver or Lead,” isolates trustworthiness as the difference between riches and a bullet in the head.

“It’s about people going to get things in Mexico that tests their loyalty and honesty,” explains Pinkus. “If you’re loyal, you get the silver. If you’re not, you get the lead.”

Exit Interview: So Long, Jeff Pinkus
BH Surfers/Honky/Melvins bassist off to Asheville, banjo on his knee