Irony, definition: an audience so busy fucking with their phones they forget to dance to “Cars” – the ultimate song about technology dividing us.

Maybe the crowd was looking for the Gary Numan of 1982, the eyeliner-wearing synth-rock innovator. What they got was a full sonic attack. From the grinding gear start of “I Was Dust,” his despairing sneer has become a banshee cry. Live, the soaring opening track from latest album Splinter (Songs from a Broken Mind) is a steam hammer leveling the land.

This is Numan the glacial artist become Numan the brutal industrial rock god. It’s what the iconography of the Mad Max-inspiredWarrior threatened but never delivered. This Numan rightly takes his place as the lost king of industrial, “Love Hurt Bleed” sliced like With Teeth-era Nine Inch Nails – sardonic, crushing. 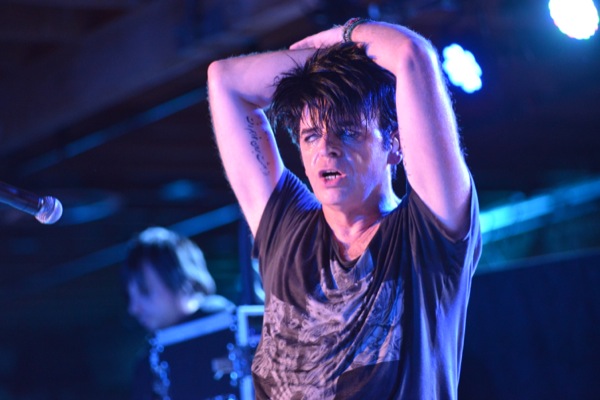 In this Numan world order, there’s reinvention. The slinky anti-dance of “Metal” comes whipped by chains and diesel fumes. As for “Down in the Park,” its opening anti-riff remains so mythical that his guitarist put down his instrument to frug stageside with glee. A juggernaut across Britain’s Seventies pub rock wasteland, re-engineered as a bomber it makes the sound of cultures collapsing.

As for his original breakout single, “Are ‘Friends’ Electric?,” a Pixies-via-Ministry loudquietveryfuckingloud rebuild accentuates the bleak elegance of the shattering phrase, “I don’t think it meant anything to you.”

Yet, even as Numan crouched and keened, somehow the crowd remained polite and interested, rather than doing the decent thing and forming a full-blown pit. Maybe the Goth set at Saturday’s Elysium gig will crush the floor for him.