Here’s some of what’s happening in Austin’s culinary scene in the last week of March, as wrangled from numerous PR releases, official posts, words on the digital street, and even the occasional (verified) IRL eavesdroppings …

Austin FC – you know, our city’s major league soccer (sorry: fútbol) team, right? – has just revealed the brand they’ve created to drive the Q2 Stadium’s culinary offerings: 512 Food Co. It’ll be a “hospitality collaboration to deliver uniquely Austin food and beverage experiences with a focus on supporting community restaurants and minority-owned purveyors,” as the official statement goes, in its official-sounding fashion. And what it translates to is the FC being in kitchen-cahoots with an array of Austin and Texas favorites, including Bao’d Up, Casa Chapala, DoubleDave’s Pizzaworks, Easy Tiger, Mmmpanadas, One Taco, Pluckers Wings Bar, Slovacek’s, Tamale Addiction, Tacodeli, Taco Flats, T-Loc’s Sonoran Hot Dogs, and Valentina’s Tex Mex BBQ. (We’re kind of impressed, tbh; at least some of those eateries, we’ve been infatuated with their food for years.) And yet, the Football Club honchos are going even farther than that laudatory but obvious move. Listen: “In addition to the brand partners that will anchor the Q2 Stadium hospitality experience,” notes their shhhh-it’s-embargo’d-until-this-very-morning press release, “512 Food Co. will launch the Austin Table, a rotational food offering in partnership with the Auguste Escoffier School of Culinary Arts, focused on minority-owned local businesses. This will empower a range of community partners to showcase their culinary offerings, and to incubate new concepts at Q2 Stadium, while providing on-the-job training for Escoffier students.” Well, damn, AFC. This sort of thing could make “synergy” a legit word again. 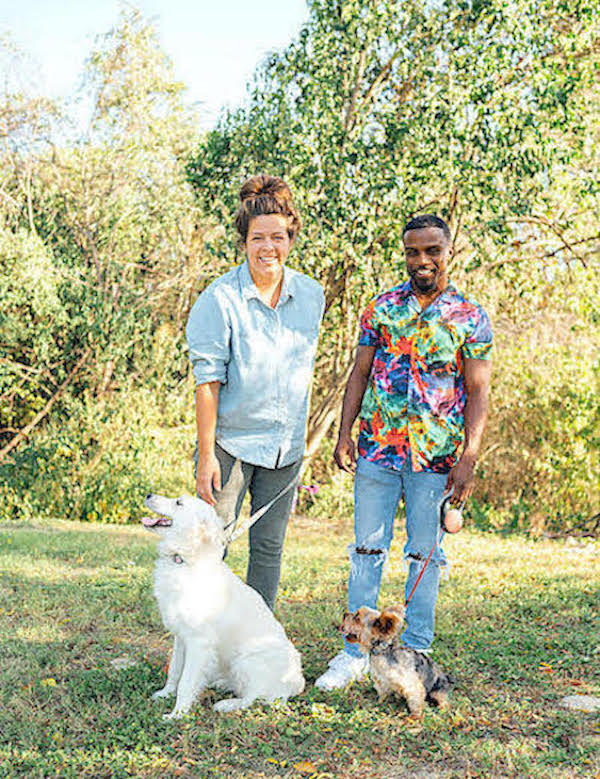 And, as if the above isn’t good enough news for one column, look: There’s a new dog park and coffee shop opening in South Austin, and it’s called Neighbors, and this is exciting even beyond the canine possibilities. Why? Because, when Neighbors opens at 5609 South Congress on April 15, it’ll be run by Kati Luedecke (of Killa Wasi fame) and Lamar Bowman (of Klock-n Fitness renown), two people who really know what the hell they’re doing and who do it right for all concerned. Plus, would you believe that Bowman is also a private dog trainer? Fact! And, the coffee shop part? Will feature coffee from local roasters and baked goods sourced from minority and women-owned businesses. And cheese and veggie boards from Casero Austin. And tea and pastries from The Steeping Room. (Oh, now we’re talkin'.) The half-acre property itself will include an outdoor covered seating and dining area. The fenced perimeter has drought-resistant, dog-friendly landscaping. Plans for shade structures throughout the property, a separate small dog area, dog washing stations, and areas for training and daycare are underway. Memberships include access to the fully staffed park, discounted daycare, neighborhood nights, and more. What is this, some kind of dog lovers’ paradise right off South Congress? Sure seems like it – and, later this year, Luedecke and Bowman will open a second Neighbors dog park in East Austin. Note: Discounted memberships are available for pre-sale at the Neighbors’ Kickstarter page.

Jimmy Eat Sandwich! Um, say what? Say, Old Thousand, that self-described Dope Chinese joint on Burnet Road, is transforming itself into a venue named Jimmy Eat Sandwich and will be serving up "emo Italian sandwiches" all day long, on Thu., April 1. Which is funny, yes – but it’s no April Fool’s joke: For that one day only, they’ll be selling house-made Chicken Parm, Eggplant Parm, Meatball Subs, Cold Cut Classic, and Italian Pork sandwiches – all featuring amazing meats cured right there on the premises – and they’ll be blasting pop punk emo music all day. Also, local design shop Fine Southern Gentlemen has produced a limited run of screen-printed Jimmy Eat Sandwich shirts, and 100% of sales of that shirt will benefit Save The Food Austin. That’s just the Burnet location, mind you. The 11th Street outpost of Old Thousand never does anything half as interesting, of course, and – well, shut my stupid mouth: Because that location is running several "Old Lobster" specials from April 1-4, featuring their spin on Red Lobster-inspired menu items like Cheddar “Bae" Scallion Pancakes, Crab Rangoons, Shrimp Scampi Lo Mein, and XO Lobster & Crawfish Fried Rice. And they’ll also have shirts benefiting Save The Food Austin for sale. SMH, but, ah, I love this city.

Salt & Time is re-opening! The craft-forward deli’s Republic Square eatery has been going strong throughout the pandemic, sure, with its sandwiches and sides and such just flying out of that sales window on delicious AF wings, but now the original Seventh Street butcher shop and restaurant (shuttered against service a year ago) is re-launching with onsite lunch and brunch on their new patio. Yes, masks will be required when you’re not seated – but you can be seated, from 11am-3pm, Mon.-Fri., and for weekend brunches, and they’ll have a variety of cocktails and beer and wine for washing all those tasty, tasty carnivores’ delights down with. (Pro tip: Try their Frorange, the joint’s refreshing take on frozen orange wine, and remember what it means to cool down in style in the middle of Texas.)

So, Austin Daily Press? That excellent purveyor of sandwiches and other noms at MLK & Chicon? They’ve just opened a ghost kitchen in North Austin, joining the (already remarkable) lineup of local restaurants working out of the Kitchen United Mix on Burnet. Yeah, no, we’re well aware that Burnet Road is once again – with that ghostery and the exemplary standalones like the above-referenced Old Thousand and Barley Swine and Bufalina Due, et al. – it’s becoming, like, the destination Restaurant Row in this town. We mean, Burnet Road, and Manor Road, and E. Cesar Chavez – we should just have those three battle it out, right? Have each of those areas put on a lucha libre mask, polish up the old turnbuckles, see which one will reign supreme via … no, no: It’s not a competition, FFS. We’re all in this together, after all, and with good eating like this all over town, pretty much everybody can win.

Speaking of ghost kitchens, that Cloud Kitchens near I-35? Has, among its culinary gambits, the Thai goodness of Charoen Express available for pickup or delivery. You knew that already – because we told you a few weeks ago – but now chef Char Chongchitmate is collaborating with nearby Smokin’ Beauty (who specialize in Vietnamese-inspired barbecue) to bring brisket-enhanced power to the new Beauty Fried Rice and Drunken Brisket dishes, and, well, yum. Because brisket, right? That’s a big hells, yeah, citizen.

Also, it’s Loro’s third anniversary on Tue., April 6, hallelujah! And that epicenter of fusionated culinary brilliance on South Lamar will be offering $3 cocktails all day long – for those who are dining in, yes – and you know those Loro cocktails are mayyyyyybe equal to the world-class food itself (as cooked up by chefs who are also savvy enough to, sometimes, collaborate with the fungusmongers of Smallhold). Word to the wise-and-drinking.