Have you reached Peak Leftovers yet, citizen? Are you still on speaking terms with certain members of your tryptophan-addled family? We feel ya, and here’s your Food News Buffet for the first week of December – as culled from numerous PR releases, official posts, words on the digital street, and even the occasional (verified) IRL eavesdroppings. 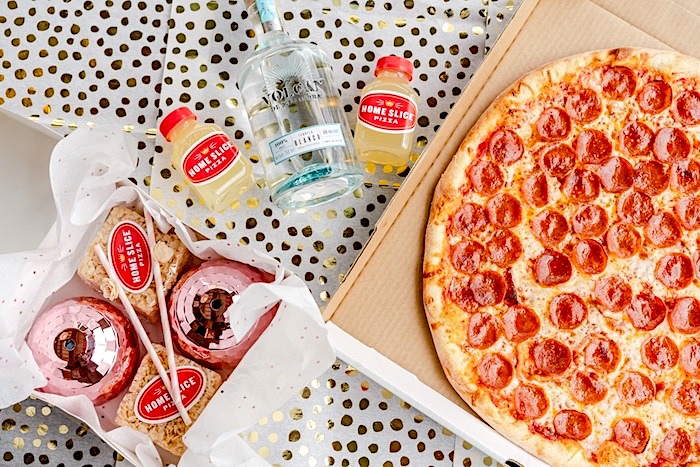 Home Slice Pizza – of whom, we’re sure, you’ve heard – is celebrating the debut of Netflix’s Selena: The Series with a limited-time pizza + cocktail kit combo. (Note: We mean the Home Slice on North Loop, specifically.) They’re calling it the “I Could Fall In Love … with Pizza,” and it comes with a large pepperoni pizza, two Rice Krispy treats, a bottle of Yellow Bird Sauce, two “Bidi Bidi Yum Yum” cocktails (made with tequila, St. Germain, lime, orange, and rosewater), and two rose-gold disco-ball souvenir glasses (and straws decked with white roses). Yeah, if you’re doing a date night in, as is the current best practices, this’ll help make it a good (and tasty) one.

Burgers everywhere, amirite? That is to say, we were recently reminded how over-the-top delicious the burgers at Hopdoddy are (and what a fine team they’ve got running their newest joint on East Fifth, especially) … and we’ve told you how Salt & Time have debuted their Butcher’s Burger menu … and our Food department honcho Jessi Cape recently wrangled Five New Burger Spots for a New Austin … and now we hear that beloved SoCo mainstay Lucky Robot has gone and activated its own burger-focused concept: Luck’s Wagyu Burger Shoppe, right there inside the Zen restaurant on Anderson Lane. So, chef Jay Huang and his crew are serving up a variety of Asian-inflected stacks for your carnivorous delight, all with wagyu beef from Peeler Farms and buns from Swedish Hill? Things may be a bit rocky in the industry in general right now, to put it mildly, but tell you what: We are currently in the midst of a bona fide Golden Age of Burgers.

Batch Craft Beer & Kolaches has a new food truck in their own back yard: Batch PM, getting ready to add an array of "elevated beer garden bites" – gourmet bratwurst, Belgian fries, and more – to Batch's already popular kolache-and-brewski-packed desmesne. The opening's set for Thu., Dec. 10, 2-9pm, and will include the release of two new beers (a 100% Peppercorn Pilsner and a Lemongrass Saison) as an early celebration of the bold brewhouse's third anniversary.

Back in October we posted about some fancy churro business that was based in, whut, Utah? Yes, well, but never mind that mail-order rigmarole – because now the ATX has its own churro-centric dessert powerhouse, a tasty upstart called Señor Churro, operating out of that ghosty Kitchen United Mix on Burnet. The place is open for take-out or delivery, the Señor tells us, and “the freshly fried churros are available in traditional cinnamon flavor, as well as innovations like coconut, cardamom, and brown sugar with fennel and dry ginger.” So we’re already salivating, tyvm, but also: “There’s even a holiday flavor of chocolate with sprinkles,” and, when they say “chocolate,” they mean Ghirardelli. And they’ve got cakes and ice creams, too, and housemade horchata among the delights of the beverage menu …

The Bunkhouse Group that runs Hotel San Jose and Hotel St. Cecilia and Jo’s Coffee and Marfa’s El Cosmico and so on? They’ve contracted exclusively with Philadelphia-born La Colombe, bigtime providers of java in the name of social decency, thus making that dovely brand the offical purveyor of coffee at Jo’s and all the Bunkhouse properties. Two important things to note at ground (or, heh, grounds) level: 1) Jo’s House Blend is a medium roast coffee with notes of milk chocolate, nuts, and honey and can be enjoyed as a drip or espresso coffee; 2) a fifth iteration of Jo’s Coffee will be opening early this winter at 41st Street and Red River. Where, yes, a Coffee Bean & Tea Leaf used to be.

You know, it’s not so much that attention from any *gasp* National Media Source honors a local business. It’s more that, in recognizing the excellence of what locals have known all along, the National Media Source has increased its legitimacy another increment. Just to be clear on that shit, OK? With that in mind, we gladly note that Food & Wine magazine has had the good sense to recognize Austin’s Dai Due and Salt & Time as butcher shops that are relentlessly above & beyond in all that they do. See? That’s just the kind of savvy you'd expect from such a journal, the sort of reportage that makes you want to buy someone a gift subscription to Food & Wine, right? (Times like these, with legacy media eroding like Jell-O in a fresh pineapple bath, a citizen should subscribe to everything they can afford to subscribe to, if the service is worthy.)

And, in closing this week’s column, we gently suggest: Go ahead and give that sourdough project of yours at least one more try, okay? You can do it, by Fornax! And watch out for those ’ronas.