A decade of this place already? Time, you’re so crazy.

This day is the tenth anniversary of Jack Allen’s Kitchen, that local and several-venued incarnation of delicious food, great service, and well-designed setting, all brought to Austin and its neighbors (hello up there, Round Rock) by chef Jack Gilmore and business savant Tom Kamm and their ever-expanding cohort of culinary professionals. 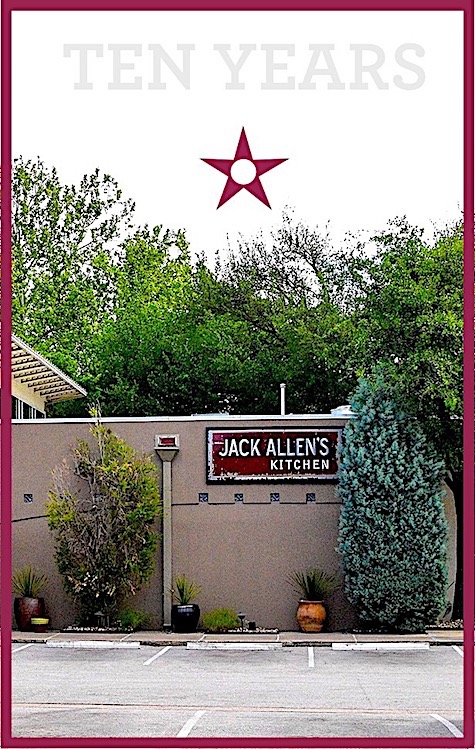 We’re marking the ten-years-thus-far of Jack Allen’s Kitchen, yes, but that’s about all we’re doing here. There’s no particular event tied to this date – although you probably don’t want to miss their anniversary shindig at Oak Hill on January 7th – so we’re not currently pumping up our listings section with the popular mini-chain’s doings. And, no, there’s no celebratory profile of Gilmore and his company to be found in this post, either.

Sorry about that, JAK fans.

To be sure, there’s much that could be noted about what Gilmore and Kamm have done with and for the local community, culinarily and otherwise. Everybody enjoys a good success story, especially when it’s a homegrown one and the principals are the sort of decent citizens you could, like, hang around and drink beer with after a day of building houses for Habitat for Humanity or whatever – you know? And a reporter could go on about the hyper-local focus of the restaurant’s cuisine, and of the relentless philanthropy that accompanies whatever wages of industry the company accrues. (Surely just that one permanent JAK menu item, the glutinous portion of heaven aka chunky queso layered with green chile pork and guacamole, where one dollar from every order served goes to support the Lone Star Paralysis Foundation – surely that, just by itself, would be something to note.)

And let’s not even mention the potential for a heartwarming father-and-son narrative, what with Jack Gilmore being the dad of Bryce Gilmore of Barley Swine and Odd Duck and Sour Duck Market fame, right?

But, listen: We’re not getting into any of that stuff right now.

Right now we’re just saying, hey, ten years since you opened that first impressive Kitchen out in Oak Hill? “Congratulations, man!” – that’s all that we’re saying at this point.

Except for one thing that we want to pass along to our readers.

Because I – Brenner, your Chronicle food lieutenant – sat down with Jack Gilmore and Tom Kamm a few weeks ago, out there in the newest JAK location just off the Capitol of Texas Highway, to talk about where they came from and what they’ve done and where they’re going.

(You know: Grist for the reporter’s mill, knowledge that’ll eventually fill a bigger story in one of our print issues.)

I sat there, realizing, after ransacking my memory to identify a niggling association, that Gilmore’s shoulder-length curls of umber-going-gray hair were reminding me of that one time I saw Led Zeppelin’s Robert Plant checking out the avocados in the Whole Foods produce department.

And I sat there over coffee, chatting, shooting the shit with these two titans of local culinary goodness, and I asked Gilmore to explain something about Jack Allen’s Kitchen that had been bugging me for months. Something about JAK in the context of the local food scene that had been pretty much chafing my mind’s soft tissues.

“Okay,” I said, “you’ve got that Fat Jack Burger on the menu, with the bacon and the cheddar cheese and all on top of it. And there are so many good things on that menu – and my friend Doug-the-Cajun, who often goes to your place in Round Rock, keeps telling me I need to try this or that other thing – but when I go to one of your Kitchens, I usually – I’m a creature of habit, I guess – I usually get the Fat Jack Burger.”

“It’s a great burger,” I said. “And you’re selling it for 12 dollars – and that’s what I don’t understand. Because I’ve had a lot of burgers in this town, in places high and low. I’m not exactly on a burger-seeking mission or anything, okay, but I’ve eaten them all over Austin. And the other burgers I’ve had, they’re not any bigger than the Fat Jack Burger. Some of them are about the same size, and some of them are smaller. And these other burgers, none of them taste better than the Fat Jack Burger – and most of them don’t taste as good.”

Gilmore watched me, waiting for whatever my point might be.

“But, the thing is,” I continued, “most of these other burgers – maybe not as big, not as tasty – the places are charging, like, three or four dollars more than a Fat Jack costs. And some places are charging even more than that. And there’s one place, it’s not even attached to a fancy hotel, that’s got a less-than-a-Fat-Jack-Burger that costs literally twice what you’re charging.”

I took a swig of coffee, wetting the old whistle with the local roast they’d kindly provided. “So what I’m wondering, Jack – because I’m no good at figuring economics, and I’ve never managed a restaurant – what I’m wondering is, as the kids say, what’s up with that?”

Gilmore looked at Kamm, looked back at me. His lips did this thing like he was repositioning a toothpick even though there was no toothpick in his lips.