Top-notch dishes to ring in the Year of the Dog

During Chinese New Year – celebrated on Friday, Feb. 16 this year – it’s important to reflect on things that matter like family, friends, and all the hopes and wishes for the upcoming year. But, it’s absolutely paramount to do all of these things over a good meal. Jiaozi originated in the snowy landscape of Northern China, and these dumplings have since become a staple of New Year supper tables all around the world. The dough-wrapped, meaty parcels of goodness are usually formed in a traditional crescent shape reminiscent of an ancient Chinese ingot. The idea is that the more jiaozi that’s eaten, the more wealth that will be accumulated in the coming year. This year, make it a priority to rake in the greens with some homemade, freshly wrapped dumplings.

The auspicious phrase “nian nian you yu” can be translated to “may the coming year be prosperous.” The last phrase “you yu” is a homophone for the phrase to have fish. So, it’s considered very lucky, and essential, to eat fish on New Year's. Although a fish may be steamed, fried, and prepared differently according to the regional traditions of provinces, the foundation principles remain the same. There needs to be a fish on the table and it must be served whole.

Kind of like the fish, a duck served on New Year's should be served whole with the head still attached to the rest of the body. Ducks and other types of fowl are usually bathed and marinated in spices for hours, hung to dry, and fried until the skin is crackling crispy and the meat is tender and juicy. A duck served whole not only makes for a beautiful centerpiece, it connotes kinship and unity between family members, in-laws and all. 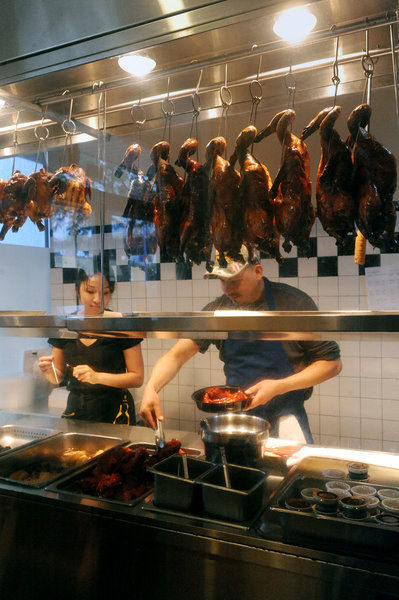 What would any Chinese meal be without some noodle lifting involved? As the myth goes, the longer the noodle one can swallow without chewing, the longer one’s life will be. Though it cannot be condoned that you should inhale as many noodles as possible in order to ensure immortality, it might be hard to resist doing so with Xian Noodles’ handmade and hand-pulled noodle selection.

If there’s any pattern emerging among the “luckiness” of these dishes, it’s that these dishes’ names are often a play on words of sayings of good fortune. Radish cakes are no exception. In the Taiwanese dialect, radish cakes, cai tou gui, sounds like the phrase for harmony. The radishes’ whiteness is also key to this dish. Whiteness is viewed to symbolize purity and a new beginning. Grab some of these savory hotcakes before they’re all gone.

Traditionally prepared in a bamboo steamer over a boiling hot wok and garnished with a single jujube in the center, rice cakes are a sugary way to end a celebration meal. During the festivities, it’s important to not eat the usual fodder like rice porridge, yams, pickled vegetables, or any other foods associated with everyday life. This is the time of the year to fill your belly with as many sweet things as possible. The concept is that if the year starts with sweet things, life for the year will be just as metaphorically sweet. The dish’s name is also a pun meaning that each year will be more successful.

For a one-stop approach to Chinese New Year, consider checking out Wu Chow Dim Sum. They’ll be kicking off the start of the festival with special dinner dishes on Friday and Saturday. Sunday morning, Wu Chow will be offering a dim sum style brunch and ending their festivities with a Lion Dance and pet adoption services with Austin Pets Alive! on Monday. 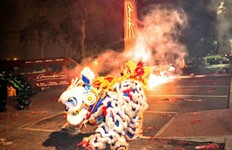