All Over Creation: Home-Cooked Art 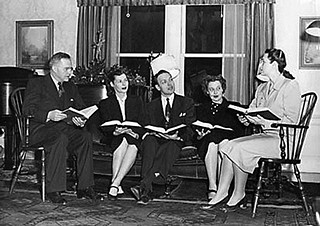 My last column began with me feeding my face and ended with me hungry – not because I was left unfilled by the holiday party food I'd crammed down my gullet; on that score, I was as stuffed as the Cratchits' Christmas goose. Rather, I'd gotten a taste of another type of nourishment – the artistic kind – that left my appetite whetted for more of the same. Listening to a world-class pianist in the intimacy of a home had impressed upon me anew what a wonder it can be to experience art where people live, to feel art so close and so closely threaded through the rhythms of daily life. After a slice of that, who wouldn't want seconds?

Now, in some cities, such home-based arts encounters may be as hard to come by as migas in Helsinki, but given Austin's affection for things site-specific, in our town not so much. The tradition of the house concert lives on in the classical scene – Salon Concerts, Revel, the Austin Chamber Music Center, and the Austin Chamber Ensemble all make performances in homes a regular part of their seasons. Local theatre groups are also hip to the power of performance in homes, with at least one every season squeezing extra juice out of a domestic drama by placing the players in an actual kitchen or bedroom. The Vestige Group based its series Muses: Memories of a House on the concept of plays written for and performed in specific homes, and, as the name implies, Mi Casa Es Su Teatro makes theatres out of houses during FronteraFest every year.

But while Austin artists make work in homes almost any old time, you don't have to wait for someone else to throw the arty party. The day before I heard Anton Nel dishing up sonatas on a living-room Steinway, I'd seen a blog post in The New York Times Arts section singing the praises of reading plays aloud around the dinner table. Book critic Dwight Garner and his wife had taken on Yasmina Reza's God of Carnage with another couple (and a bottle of rum) and enjoyed the experience so much that he recommended it to Times readers. That put me in mind of the readings that my wife, the actress Barbara Chisholm, and I had hosted in our home. Some were serious and seriously thrilling (Tracy Letts' August: Osage County, Karen Zacarias' Legacy of Light), some less sober (literally – for Chekhov's Three Sisters, everyone had to knock back a shot of vodka whenever any character said "Moscow"; for O'Neill's The Iceman Cometh, it was whiskey anytime someone said "pipe dream." Did we finish either play? No, we did not). But what all the readings shared was that intimate interweaving of art and home – the creative work sparked to life in a personal way in the place where we live. Which made me realize that the thing that I'd been so engaged by at that holiday party and was craving so, I'd already created in my own home and could easily create again. For that matter, so could you.

Hosting a play reading is almost embarrassingly easy. All it requires are enough scripts for the guests, a touch of hospitality on your part, and friends who will read. Most of the people who read with us were longtime show folk, accustomed to rattling off lines in front of others, but the experience of the readers isn't what really matters, any more than it mattered that Nel was tickling the ivories at that soiree. The significant thing is that it's happening in this personal, intimate space. Garner is on to something when he says of Reza's writing: "It's a treat to have her words in your mouth." The lines come from you. You give them sound and breath and a life they couldn't have on the page, and your friend or wife or brother responds to you with words in the same way, and those words mingle with the furniture you're sitting on, the walls around you, the rooms beyond and everything in them. Your home is an oven in which art is being baked.

Time was, that happened in almost every home in some way: reading aloud, singing, playing piano, stitching. We've gotten away from it, preferring to passively consume what others have created in our homes. A new year is upon us, that time for resolutions. Maybe we can resolve to bake a little more art at home next year. I'm telling you, the taste can't be beat.

All Over Creation: Hit Where You Live
A recital at a holiday soiree confirms there's no place like home for art