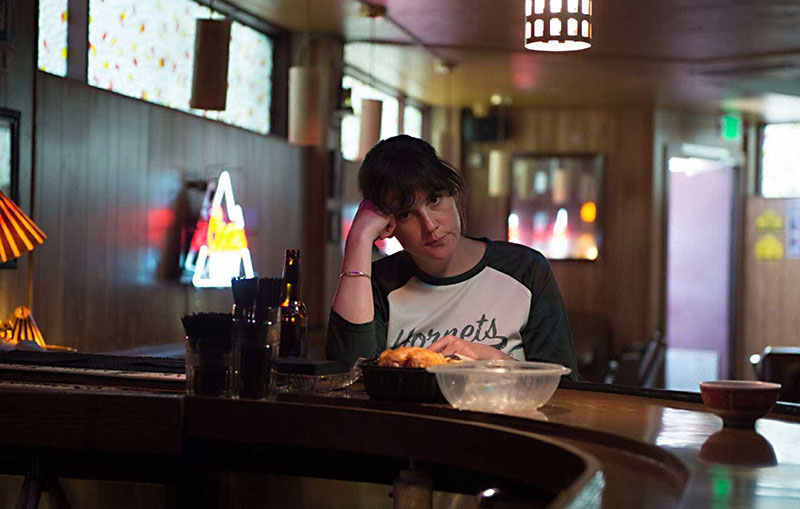 I Don't Feel at Home in This World Anymore (Netflix)

As Sartre presciently noted, "Hell is other people." You don't have to tell that to nursing assistant Ruth (Melanie Lynskey), a woman adrift in a world of apathy and petty entitlement. She has found a shaky limbo consisting of antidepressants, Coors Light, and epic fantasy novels to while away her existence. But when her house is robbed, she is shaken out of her paralysis and into action. The police are condescending, offering little hope for the retrieval of her laptop, and more importantly, her grandmother's silverware set. Thus begins this absurd neo-noir comedy, the feature-film debut of Austin actor/filmmaker Macon Blair.

Ruth teams up with her neighbor and martial arts enthusiast Tony (Elijah Wood), and together they seek to mete out some vigilante justice (or at least just get her shit back). Through their investigation, they run afoul of the thieves led by a creepy David Yow (of Jesus Lizard/Scratch Acid fame). Violence soon rears its head, starting with a broken finger and ending with, well, all manner of gory mayhem. It's a film that so confidently walks the shuriken edge of laugh-out-loud funny and cringe-inducing violence, and it does so with such a nonchalant self-assurance, that it's no wonder the film took home the Grand Jury Prize at Sundance in January, was snatched up by Netflix soon after, and most recently, was awarded the 2017 Austin Film Award by the Austin Film Critics Association, with a special screening taking place this Saturday, Jan. 6, 7pm, at AFS Cinema. Writer/director Blair (along with special guests) will be in attendance.

Anchored by a grounded performance by Lynskey (who currently has the best eye roll in show business), I Don't Feel at Home... is a film that just happens to arrive at the right time. Tensions are high in this country, and Blair's microcosm of ennui, indifference, and clumsy violence reflects a number of themes so prevalent in this society. "Everyone ... is dildos," Ruth laments to her best friend Angie (Lee Eddy) early on. Later, when confronting the wealthy father of one of the thieves, he proclaims, "Anyone can do anything, if you let them." Blair's film is a monkey wrench thrown into the mix, so watch out: You may get a shuriken to the face (or a snake for that matter).