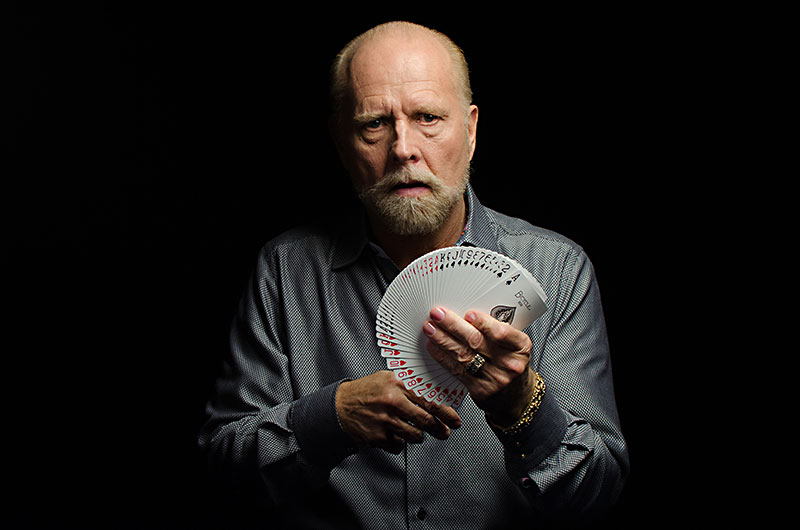 Richard Turner trades in the impossible. Armed with just Bicycle playing cards, his sleight-of-hand tricks are so deceptive that they've earned him the title of Close Up Magician of the Year from the Academy of Magical Arts. But he considers his craft very different than pulling rabbits out of hats.

"A card mechanic is someone who can control the outcome of a card game. The techniques on a card table are 1,000 times more difficult than the techniques that magicians use to do magic. There are only half a dozen world-class card mechanics," says Turner, who at age 62 has been performing for more than four decades.

Dealt, a documentary directed by Austinite Luke Korem world premiering at SXSW, follows two and a half years of Turner's life. He's almost never without a deck of cards in his hand; his wife even once caught him shuffling during sex. From his home in San Antonio, he's traveled the world performing and essentially rewrote the handbook on card mechanics, but perhaps his greatest challenge isn't controlling what the audience sees, it's dealing with what he can't.

To put it bluntly, Turner is blind. His eyesight slowly deteriorated as a teen, eventually leaving his vision completely dark, but throughout his career, he's never let that be a handicap or a schtick. If it were up to him, he'd prefer the audience not know about his condition at all.

"I don't use a cane or a dog. Those are tip-offs; my karate instructor said never to advertise my weaknesses," says Turner, who earned a black belt with only a hint of 20/400 peripheral vision. He's remained remarkably self-sufficient and obsessively driven, exercising for nearly two hours every morning and maintaining a card practice regimen that at one point averaged out at 14 hours a day.

The idea that one lowered sense heightens another is a cringeworthy conceit to Turner, but he admits that in an oblique way, his lack of vision was an asset. His mentor Dai "The Professor" Vernon, a card mechanic with hands so sly that Houdini couldn't follow them, cleverly pushed Turner to achieve moves thought physically impossible.

"He'd describe moves to me in a perfect manner, in the way he wished they could be done. Because I couldn't see what he was showing me, I just assumed they could be done. I'd spend thousands of hours working on a particular move. It was years later he admitted that he'd made them up," says Turner.

The training resulted in a style that's dramatically different from his contemporaries. Turner's grip on the cards looks much more natural and further builds the illusion that there's no way he could be doing a move like a Greek Deal (pulling the second card from the bottom of the deck). That trick and 65 different shuffling techniques are explained in his DVD series, but if you don't have a few thousand extra hours of practice time, the best way to appreciate his skill is just to catch a show. Luckily, he doesn't plan to stop performing anytime soon.

"I will retire when there's a casket laid in front of me," says Turner. "I'll crawl in."