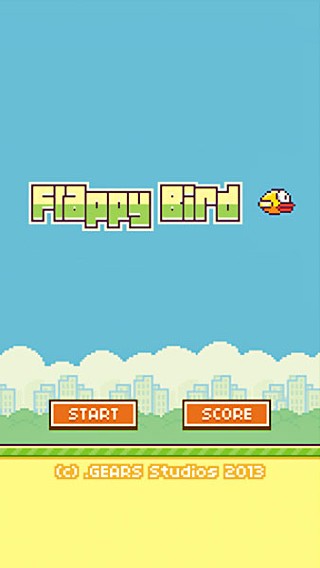 This is the story of Flappy Bird, a little game about flying and avoiding pipes – such a simple idea that enchanted the public, if only for a little while. Its rise was meteoric, its success inexplicable, and its disappearance confounding. Whatever Flappy Bird's legacy might be when the dust settles is uncertain, but, if nothing else, it was a model of a modern major game release. Perhaps more importantly, it held up a mirror to the best and worst aspects of gaming culture. But did we learn anything?

The biggest mystery of Flappy Bird is why it became popular in the first place. Some chalk it up to some unknowable recipe for virulence that made the game exceptionally sharable. Sure, a $0 price point and having a cute bird protagonist can't hurt, but there are oodles of gratis aviary options that never take flight. More jaded critics claimed Flappy Bird's creator, Dong Nguyen, cheated his way to the App Store's most-downloaded list (which makes a game infinitely more visible) by employing bots to download the game over and over. That accusation is difficult to prove, however.

Either way, it was the dream of wild success becoming reality ... again. Markus Persson, aka Notch, planted the seeds of such dreams in developers' heads when Minecraft went on to make him a household name with a heavily comma'd income. Before the age of DIY publishing on mobile devices, success on that scale was thought to be limited to large teams with hefty marketing budgets. Nowadays, anyone can submit their creation to one of several stores that distribute to phones and tablets everywhere. This increasingly egalitarian marketplace is mirrored on the development side as tools to make games require less formal training. Zoe Quinn, co-presenter of "Riot Nrrrd: The DIY Future of Games" panel, sees this as inherently good: "That's really opening the door to who has the skill set to make games and making that barrier to entry lower and lower." Nguyen may not be the perfect case study for this leveling of the playing field, but there's no denying he benefited from the market doors being so wide open and putting a largely unremarkable game in front of millions of people.

With great popularity comes great blowback, and those forces tend to even out. To balance the $50,000 Nguyen was reportedly making per day from ads in his game, the response was laden with bile. Twitter oozed with complaints that it was too hard, too frustrating, or too addictive, three attributes that are just as often used to paint quick-play games in a positive light. Accusations arose of Nguyen's pipes too closely resembling the iconic pipes found in Super Mario Bros. But if every game using imagery, tropes, or gameplay from classic Nintendo titles were yanked from the market, gaming libraries would be gutted.

Some of the people with Flappy Bird in their crosshairs were fellow developers who couldn't help but come off as jealous even if they made valid critiques. Another vocal group of detractors were avid gamers who have earned a reputation for often personal and ugly vitriol. In the past year alone, the seedy underbelly of gaming culture has surfaced more than a few times. Take Anita Sarkeesian, whose webseries on sexist tropes in video games was well-researched and eye-opening. However, some individuals wanted to remain blind and responded to her videos with personal threats of violence and death. Instances of outing trans individuals or displaying woeful and willful ignorance of gender identity were also shockingly commonplace. Some gamers just don't like having their subculture "threatened" by would-be interlopers. It's a shame, since the term "gamer" continues to broaden in scope with each passing year to include just about everyone to some degree.

Power fantasies have long been a popular mode of play, and posting opinions online can be seen as another mode of that false empowerment. It often takes the form of attacks on those with opinions outside the norm. And the norm on the development side is still white and male. What's the point of breaking down barriers to making and distributing games if the sign on the door still says "No girls or minorities allowed"? Canabalt and Hundreds designer Adam Saltsman – who openly admits to being a white male – strangely came up against this invisible barrier, when he asked female artists via Twitter to submit résumés for possible collaboration on a future project.

Claims of reverse sexism soon followed. These reactions obviously ignore decades of hostility toward a minority in the industry, but Saltsman also saw the call as much about encouraging women to apply as it was about improving the quality of the final product. "When you see studios push back against those trends in a notable way ... the work that they make is really remarkable." Saltsman points to Gone Home and Journey as examples. "Are things better than they've ever been? It kinda feels like it. Are they good enough? No." 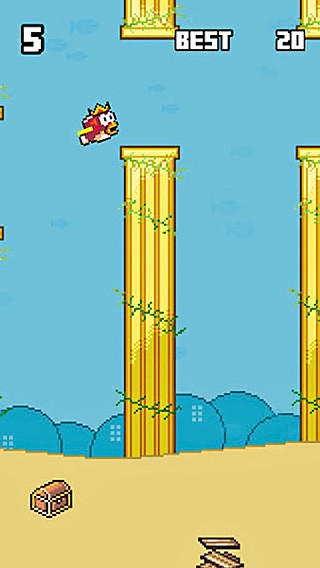 So, what makes this bird flap? Critically speaking, the game is made for short bursts of play with each round lasting little more than a few seconds. The controls consist of tapping to make your bird thrust upward. That's it. It's accessible and understandable to a wide audience without hand-holding. The design is generically retro, and the difficulty goes from zero to impossible in about two flaps. Does it revolutionize the industry? Not at all. Is it destroying the very fiber that great designers have sown over decades of game creation? Certainly not any more than other popular games like Candy Crush Saga or Angry Birds.

But what about the medium as a whole? Should the goal be interactive cinema like the big-budget The Last of Us, or does the focus need to shift to what makes video games unique from other art forms, namely systems and mechanics? Flappy Bird, while not the most elegant example, belongs largely in the latter category. The story arc is all but spoiled in the title. The real reason to play is not the story. It's to perfect the mechanic of flapping.

Beneath the best examples of narrative-centric video games lies the fact that interactive media has two authors: the creator and the player. Even with innovations in storytelling like Mass Effect that offer decisions and consequences, there continue to be awkward moments when actions during a massive shoot-out are ignored in cinematic portions to keep the plot moving. Indie developer Shay Pierce, who will sit on the panel "The Narrative Debate in Game Design" sees a happy middle ground, "Games as story-generators instead of just storytellers is their strength." In other words, finding ways to let players create their own unique stories within a system of rules embraces the nature of the art form while still spinning an engrossing yarn.

Whereas books are uniquely equipped to tell a character's internal story, and movies show action well, games are equipped to evoke feelings of empathy. Zoe Quinn's Depression Quest and Lucas Pope's Papers, Please both place players in unfortunate circumstances, but instead of overcoming the odds in a blaze of bullet-strewn glory, one leaves with a sense of what it is to live with inescapable depression or to make difficult decisions that gravely affect others.

Perhaps something worth striving for lies at the other end of the "purpose of gaming" spectrum, too. Saltsman plays devil's advocate and posits another aim for the medium put forth by academics like Frank Lantz and Jesper Juul. "We could be aspiring to soccer or chess," Saltsman says. "Why would you even try to tell artistic stories when you could be helping to create a new human activity that would change millions of peoples lives forever?"

When we left him, Nguyen was making money hand over fist and becoming an overnight sensation, for better or worse. Just when Flappy Bird's popularity began to peak, rumblings cropped up on Twitter. Nguyen's tweets between Feb. 4 and 8 show a downward spiral:

Press people are overrating the success of my games. It is something I never want. Please give me peace.

I can call 'Flappy Bird' is a success of mine. But it also ruins my simple life. So now I hate it. 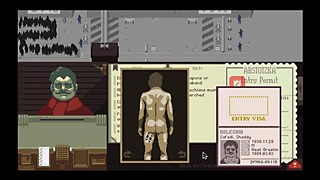 That sucking sound you hear is millions of people Googling "Flappy Bird" only to realize that bird has flown. The vacuum created by the game's removal was quickly filled the next day. The top free apps consist of Splashy Fish – The Adventure of a Flappy Tiny Bird Fish, City Bird – Flappy Flyer, and Fly Birdie – Bird Flyer. Needless to say, those titles look strikingly similar to the original.

The App Store remains the holy grail for independent developers, but it's also the Wild West. Cloning runs rampant, as teams capitalize on what's popular at any given moment and make a quick buck – or a few million bucks, for that matter. Apple takes action against some of the more egregious offenders, but the volume of imitators flooding the market make it a Sisyphean task.

King – creators of another viral hit, Candy Crush Saga – decided to fight its army of imitators with legal action. The company notoriously trademarked the words "candy" and "saga" and sent notices that games using those words would be subject to lawsuits if they didn't cease and desist. The clones of Candy Crush are admittedly legion, but this blanket action drew the ire of indies whose games had no resemblance to Candy Crush and couldn't possibly pay court fees against a money monster like King. Is trademarking the only way to end the clone wars? Is it possible to trademark the act of flapping? "A patent system should exist, but I've seen that system abused so badly I wouldn't want to see it introduced to game design," Pierce admits. "I'd rather err on the side of saying ideas are free, even though it's frustrating."

Lest you feel too badly for Nguyen, he continues to make profits off ad impressions from the millions of devices that downloaded Flappy Bird before its disappearance. His unique rise to fame and press attention has only served to grow his mystique. Whatever Nguyen decides to do next will have the eyes of the world on it.

Soon after Flappy Bird flew away, notable developers surfaced with encouraging words. A few developers went so far as to create games as homage to the fallen flapper. Terry Cavanagh made Maverick Bird in the style of his frustratingly hard, arcade-style game Super Hexagon. Free to play and sans ads, Cavanagh wasn't making any money from his iteration on Nguyen's creation, but made it clear that the original wasn't without its merits. Saltsman also got in on the fun, making a mash-up of Flappy Bird and his game Canabalt: Flappybalt.

In a medium rife with trolls, clones, and artistic corruption is the pot of gold at the end of the often shitty rainbow worth it? Zoe Quinn seems to think so. "One of the reasons I stick around is because I'm surrounded by these people who take this medium that I love with my entire being and do amazing things with it."