Writer-director John Sayles on why he returned to the border for his latest film, 'Go for Sisters'

A parole officer learns her son has gone missing under shady circumstances, so she drafts an ex-con who was once her closest friend – so close, folks said the two could "go for sisters" – to help her hunt the underworld for him. Indie film icon John Sayles (Honeydripper, Limbo, Passion Fish), who made their quest the heart of his 19th feature film, Go for Sisters, allows that the son's disappearance could have taken place in the U.S., but he chose to set it on the line between this country and Mexico, forcing the women and their guide, a former cop who was once known as the Terminator but is now just a victim of failing eyesight, to venture into a world that's completely unfamiliar to them: one beyond the border.

This is territory that Sayles has explored before, most memorably in his 1996 feature Lone Star. As in that film, the border in Go for Sisters may divide nations, but it means as little to the criminal trade as it does to the wind. They move freely across it, smuggling goods and humans, and the search by Bernice (LisaGay Hamilton), Fontayne (Yolonda Ross), and ex-cop Freddy Suárez (Edward James Olmos) takes them deep into the part of Tijuana ruled by drug and human traffickers. Go for Sisters, which had its North American premiere at South by Southwest this year, returns to Austin this week for an engagement at the Alamo Drafthouse Slaughter Lane. With Sayles coming with it for an Austin Film Society screening (Saturday, Dec. 7, 7pm) and an AFS screening of Matewan (Sunday, Dec. 8, 8pm, Marchesa Hall & Theatre), this seemed an apt time to ask him about this particular run for the border.

Austin Chronicle: Place never feels like window dressing in your films. The visuals, the sounds, the music, everything about the culture, is there to immerse us in that world. Do you spend a lot of time working on that?

John Sayles: For me, it's a character in the story, and it changes things. It's very different if you're on the Texas-Mexico border than if you're in Cajun country in Louisiana. It's a different culture. And it looks different, and the look affects things. Our movie Matewan, one of the things we realized was if you're in one of those hollers, just technically, you have an hour less of light in the mornings and an hour less of light in the afternoon, and you can be outdoors and be claustrophobic. You look left and you look right, and there's a wall in front of you. They're that steep. You look left and right down on the Río Bravo, and there's nothing in front of you as far as the eye can see, and it's a very, very different feeling. So there is that physical part of it that you just talk about with the cinematographer, but there's also just: How does the culture affect people? A border town is different from Central Texas or Central California. And it does really make a difference which side of the border you're on. There are things that are different and rules that are different and ways of thinking that are different. So it's something that I'm very aware of and spent a lot of time on, and [I'm] very specific about what locations I choose.

When we were making Lone Star, we spent three days looking around Austin, at some of the little towns around it, saying, "Is there any way [to shoot here], because the cast and crew are going to have much more fun on their day off and be much more comfortable if we can shoot around Austin." But we'd been to the border, and nothing looked the same and nothing felt the same. So we just couldn't fake it. The hardest thing about Go for Sisters was that we had less than a million dollars, we had 19 days to shoot it, and we had more than 65 locations, meaning more than 65 times that we had to move everybody. And that adds to your day, adds to the difficulty, and it takes away from the time that you have to work with the actors and actually be shooting. But those places are part of the story.

AC: What draws you to the border as a setting?

JS: One thing that always fascinates me about borders is, whatever country it is, this is where I stop and somebody else begins. So it's one of the ways that you define yourself. And border towns are usually there because there's a border there, and the economy is therefore based on: What can one do on this side of the river that one can't do on the other? What can one get on this side of the river that one can't get on the other? So there's some real economics and some criminal economics always involved in border towns. Even in state borders. You cross one border in the States and the first thing you see is all the fireworks, 'cause in the state you're going from, fireworks aren't allowed. Most of the great music towns in the United States [got started] because during Prohibition, the mayor of Kansas City or Memphis or whatever said, "As long as you pay something to me and keep your head down, you can have a nightclub." So all the musicians would end up going to those towns, usually right across the river from a state that was much more straitlaced. Las Vegas is our most popular border town, and it's right in the middle of the country. You know, what happens in Vegas stays in Vegas. And that's why they make money. There's all these people, most of them from the Midwest, and they go and get close to Tijuana without it being hot and sleazy as the worst parts of Tijuana can be. But they have that thrill of, "Here I am in Sin City." So that's some of it. It's about cultures defining themselves. 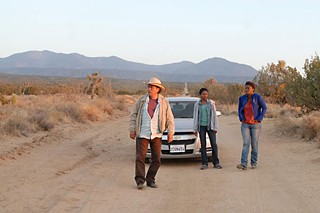 Then there's this kind of gray area of people who deal in them, who know both sides of the border, who are the guides. The character that Eddie Olmos plays in this, ex-Detective Suárez, is one of those guys who has at least some experience on the other side and knows some of the players and some of what goes on. And then there's the mystery. There are the places where no one can really guide you – Chinatown, or, in this case, la Chinesca, where it's always seemed like a mystery and a closed community and "Oh, those people have their own rules." Robert Towne used it literally and as a kind of metaphor in the movie Chinatown.

AC: What made the border a particularly compelling place for Bernice and Fontayne?

JS: Really, this is a plot necessity, in a way. It could have been a kidnapping in the States. I always start with characters in a situation, and once I had those characters in that situation, I said, "Well, first of all I have to take the two women somewhere where they have no expertise and Freddy Suárez does, and then I want to get Freddy Suárez into a situation where all his expertise [doesn't help him]." It's not just that he's blind. He doesn't have any juice in the Chinese community. He really doesn't know what goes on there. I needed that unknown territory for them to go into.

AC: Time works as a sort of metaphorical border, too, because the friendship between Bernice and Fontayne has become unknown territory. They don't know each other in the way they did when they were younger.

JS: Life has happened to them. And they've shifted class and experience, so some of the question of the movie, some of the drama of the setup, is: Is it possible for these two to become friends again, and is it possible for either of them to find that person they liked back when they were with that other person? They both kind of need to; stuff has happened to them that's not necessarily good, so there's something attractive about going back and finding that person again, like there's something attractive to Freddy Suárez about being the Terminator again, when he had the world under his thumbs and had some power and belief in himself.

AC: The movie has a lot of tension and suspense in it, but you make us as tense and concerned for the friendship of these two women as for Bernice's kidnapped son.

JS: Yeah, you don't know. Extreme situations are extreme situations, so guys who are like brothers in combat may get out of combat and realize they don't have anything in common. They're not even friends back at the base if the air raid is over. So there really is that question. What they go through is personal as well as plot-driven, and they see each other and see themselves with each other, and there's something comfortable and that they like about themselves when they're together. At the end, when she says, "So what would we do together?" and she says, "Whatever," well, that's probably something that they said 25 times when they were kids back in Compton. You know, you didn't need to have something to do. It was just, "Let's just hang," and that was your friend, and you felt good about yourself when you were with her.

AC: The interactions among all three of the main characters – the choices they make, the way they push themselves to do things they haven't done before or that they don't know that they can do – fuse together in a really compelling way.

Go for Sisters opens Friday, Dec. 6, at the Alamo Drafthouse Slaughter Lane. See Film Listings for showtimes and a review.