You Gotta Have the Mettle 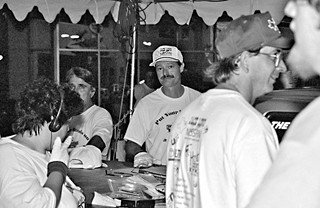 Cult stars are born, not made. Sometimes it's just a matter of being in the right place at the right time.

Take "Hands on a Hardbody" contest veteran Benny Perkins, the most memorably outspoken subject of S.R. Bindler's 1997 documentary Hands on a Hard Body. Perkins' 20-year affiliation with the East Texas phenomenon has been largely a fluke. His story begins in the parking lot of a Nissan dealership in Longview, then meanders through Hollywood and Broadway, and finally ends up close to where it started, in his front yard in Diana, Texas.

In 1992, Perkins entered the inaugural "Hardbody" event, a promotional stunt orchestrated by Jack Long Nissan in which 24 contenders were picked at random from a pool of entrants to compete for a new $15,000 "hardbody" pickup. The objective was to stay upright, keeping one gloved hand on the truck, for as long as possible. Nobody knew how long that would be.

Between periodic short breaks, the participants stood under the eyes of the referees. One by one, they fell away, due to boredom, mistakes, back pain, aching legs, and the discombobulating side effects of sleep deprivation, including tunnel vision, perceptual hallucinations, and uncontrollable fits of laughter. Perkins kept his hand on the truck for 87 hours and took it home.

He was a celebrity in Longview after that, regaling everybody in town with his war stories. "I actually talked myself hoarse," he told me in a phone interview. (He was driving around in his current pickup, a Ford Ranger, when we spoke.) His fame dissipated after a couple of months, and he returned to referee the contest the following year. Though he kept entering himself in the drawing, he thought that would be the end of it.

Then in 1995, Jack Long's people drew his name again, and he returned to try to break his record. This time he crossed paths with Bindler, a film-school graduate and Longview native who was shooting a Hi-8 video documentary about the contest with friends from New York University. Perkins, who had appeared in other people's home videos during the previous contest, wasn't expecting much. Still, he cooperated with the filmmakers and gave a spirited performance answering their interview questions. The contest lasted 77 hours. Perkins placed third and limped away with a gift certificate. Again, he thought the thing was over. But in 1998, he got a call from a cousin in Austin. "She said, 'You're not gonna believe what I saw last night. I saw your ugly mug up on the silver screen. I saw the movie Hands on a Hard Body.' I said, 'What?!'"

A critical and commercial hit, Bindler's film landed here in a flurry of festival accolades, beginning a legendary year-plus run at the old Dobie Theater. This month, a remastered version of the film, with the revised title Hands on a Hardbody: The Documentary, returns to Austin in honor of the film's re-release on DVD.

Neither director/editor Bindler, nor his producer Chapin Wilson, suspected such an auspicious future for their movie when the 1995 contest began. They certainly didn't expect HOHB to inspire two big-budget adaptations – one, an unfinished project by the late, great director Robert Altman and the other, a musical that would make it to Broadway. They were just fresh-out-of-film-school kids looking for anything to shoot so they'd have something to edit. As Bindler told me over the phone, "Everyone asked what we were up to, and the simple answer was an honest one, which is: 'We don't know. We're just making a movie.'"

Prior to the event, the filmmakers invited the contestants to their "production office" (a recently vacated building formerly owned by the Church of the Nazarene that somebody's mom had the keys to) for a preliminary round of individual interviews. As a backdrop, Bindler made a 35mm slide of Wilson's hand and projected it on the wall. The director asked each aspirant a series of questions: Why do you want the truck? Why do you think you can win the contest? How will you do it? It became clear to him that next to nobody had given any thought to strategy.

But Perkins was an old pro. Not only did he lay out his game plan, he philosophized about the contest as a metaphor for life, flinging around one-liner gold like Confucius in a cowboy hat ("This is a human drama thing. ... You gotta have the mettle. ... If you can't run with the big dogs, stay up on the porch with the pups").

Bindler spent two years editing the interviews and three cameras' worth of contest footage into a feature. Those who haven't seen HOHB might expect a dose of condescension toward the film's eccentric working-class subjects, but this is not the case. The film is genuinely openhearted; rather than dwelling on antagonism, it focuses on the burgeoning friendships between the rivals. Standing face-to-face for days on end, they become comrades, fellow sufferers. There's an almost mystical aura around the truck. The humorous yet empathetic tone is similar to that of Richard Linklater's East-Texas-set Bernie, and the direct connections between the two films are worth mentioning. In Linklater's film, Matthew McConaughey, as District Attorney Danny Buck Davison, stages a "Hardbody" contest to lure some deadbeat dads out of hiding (Linklater plays one of them in a cameo). Detour Filmproduction's Kirsten McMurray explained in an email that Linklater, who is friends with Bindler, was writing the Bernie script at the time of HOHB's release and intended the scene partly as an homage. And as Perkins noted, Bindler's old amigo McConaughey helped finance HOHB.

After the release, Perkins experienced "another round of popularity," but this one faded more quickly than the last. He didn't put his name into the drawing again, for several reasons – one of which was that he went to Iraq, subcontracted to the Army as a heavy diesel mechanic.

While he was over there, two events cast a shadow on the contest and its legacy. In 2005, a 24-year-old metalworker and second-time contestant named Richard Vega dropped out of the competition after 48 hours and immediately committed suicide. It was a grisly tragedy that sparked local and national debate about the ethics of endurance-test competitions (and has even been cited in medical literature on the effects of sleep deprivation). The following year, Robert Altman died of cancer while working on his adaptation of HOHB. The screenwriter for the project, Stephen Harrigan, later disclosed in a Slate column that the cast was to include Meryl Streep, Hilary Swank, Billy Bob Thornton, Jack Black, Chris Rock, John C. Reilly, and Steve Buscemi.

Sometime after Perkins returned from Iraq, he got a call from Dallas. A group of theatrical producers were putting together a musical adaptation, and they wanted to buy his life rights. Well, why not? "They hooked me up with a little pocket change. I didn't think nothing of it. They told me that one of about every 10 musicals will actually go into production, and then there's probably one in six or one in eight of those that actually go onstage. So I'm saying: 'I'm down in odds. It's a done deal.'"

It wasn't. Earlier this year, Perkins found himself on the stage of New York's Brooks Atkinson Theatre following the Broadway premiere of Hands on a Hardbody: The Musical, produced by the Pulitzer Prize-winning dramatist Doug Wright. And there he was, the real Benny Perkins, taking a bow beside "Benny Perkins," played by Hunter Foster, in front of an audience of 900 people. "That was amazing," he recalled. "Purely phenomenal as far as I'm concerned." He also praised the finished product: "The transition from dialogue to song was just as smooth as glass. It's very professionally done."

A few days after we spoke, Perkins contacted me on Facebook to say the musical's run was ending. He was sad about it. Perhaps the musical was too professionally done, lacking the spark of spontaneity that buoyed the documentary. I was reminded of the epigraph of Bindler's film, a famous line by Willa Cather: "The end is nothing; the road is all." Ultimately, experience is its own reward. Perkins still has his 1992 Nissan. It doesn't run anymore, but he proudly displays it in his front yard like a trophy. "It's been sitting out there for about five years," he told me. "I mean, it still looks good."

On the Road with 'HOHB'

The Texas Independent Film Network is halfway through a statewide tour of Hands on a Hardbody: The Documentary, in celebration of the DVD re-release. Take a road trip to catch this quintessentially Texan film at one of these cities before it stops in Austin next week. – Monica Riese