Making a movie in Austin? Dana Wheeler-Nicholson's your gal. 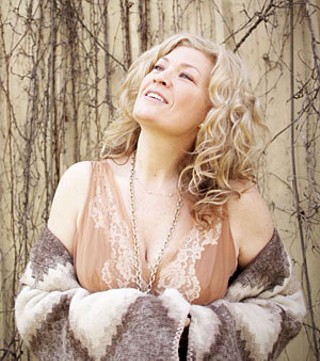 She was all of 23 when she scored an audition for Fletch, and she's convinced Chase's guffaws sealed the deal. "I was just a kid," she says. "I don't remember what I said. I just remember the laughter."

Wheeler-Nicholson, a self-described "ham bone," dove headfirst into an enduring film/television career. She's probably best known for her roles in Fletch and Tombstone, but South by Southwest Film Festival attendees may think of her as the Austin actress. She strutted down the Texas Film Hall of Fame runway with brethren from TV's Friday Night Lights, and she has star turns in SXSW films Five Time Champion and blacktino.

"It was a real Geronimo moment," she says of moving from Los Angeles to Austin in the mid-2000s to be with love Alex Smith, a filmmaker and lecturer in the University of Texas' Radio-Television-Film Department. "I was leaving an industry town for who knows what. I thought, 'You're a grownup with a career that's decades long.' I opted for quality of life, love, and music. Austin spoke to me."

She wasn't sure what the Austin move would do to her acting career, but she auditioned for Friday Night Lights two months after arrival. "I loved the part probably more than anything I've ever done," she says of Angela Collette, wild mother of Adrianne Palicki's wild Tyra. "She was the pretty girl in school who got married too young and got stuck there." Wheeler-Nicholson feels very much the proud mom as Palicki soon stars as Wonder Woman in an NBC pilot. "She's a huge comic book geek," she says of Palicki. "I'm overjoyed as her ex-mom. She'll have another TV mother now."

Wheeler-Nicholson is again a single mom in Berndt Mader's Five Time Champion, a film she saw in its first draft through Smith's role as head of the University of Texas Film Institute. The story follows three imperfect generations of a small-town family as their lives wobble in and out of control. "It was an impressive, beautiful script. It's unusual to have a movie like this in our times from someone so young," she says of Mader. "There's no irony, no trying to be hip."

Her role in Aaron Burns' blacktino is a smaller one, done at the request of film producer Elizabeth Avellán. In the dark teen comedy, Wheeler-Nicholson is a mother again, this time married to Danny Trejo. "It's funny, adorable, and heartbreaking," she says. "It's another sweet story without irony. I loved playing a stoner wife, and Danny tells a story whether he opens his mouth or not."

When not acting, Wheeler-Nicholas is often teaching other actors, out enjoying music, or singing. She has quietly gotten serious about performing mostly jazz and hopes to record soon. She'd also like to be able to have a sustained film career from Austin. "There should be enough production here, but there isn't as of today," she says, expressing dismay at the Texas Legislature's likely cuts to filming incentives. "I haven't heard a rational argument against [incentives] yet."