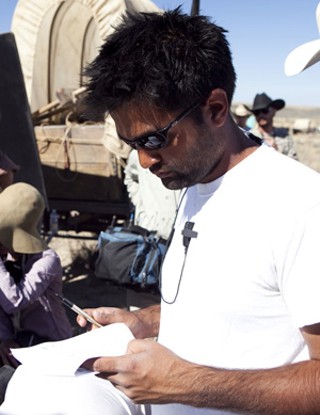 Independent producer Anish Savjani has been quietly racking up an impressive body of work over the past five years, much of it with ties to Austin that began with his first feature, director Steve Collins' endearingly melancholy quirkfest Gretchen. Savjani's most recent film is Meek's Cutoff, his third with director Kelly Reichardt, following the critically adored duo Old Joy (2006) and Wendy and Lucy (2008). All three films were nominated for Independent Spirit Awards.

Though this year's ceremony isn't till this weekend, Savjani got the good news early, winning the Piaget Producers Award and a hefty $25,000 grant for his work on Meek's Cutoff. The film is a breathtaking accomplishment. Set amid the eerie, parched landscape of the Oregon High Desert and starring Michelle Williams, Shirley Henderson, and Paul Dano, Meek's follows, from a distance, the increasingly desperate fortunes of a trio of pioneer families lost upon and around the Oregon Trail in 1845. You could call it a Western, but it's more an anti-Western, with precious few heroics and a woebegone evocation of the sheer grind of westward expansion in the face of a desolate, unfathomable wilderness.

The Austin Chronicle spoke to Savjani about his work with Reichardt, his New York-based production company, filmscience, and the ever fluxing future of traditional independent film distribution in the emerging digital distribution era.

Austin Chronicle: How did your relationship with director Kelly Reichardt come about?

Anish Savjani: I came on at the tail end of Old Joy to help finish up with post-production, and it just sort of snowballed from there. Jay Van Hoy, Lars Knudsen, and myself made a few other features and started working with filmmakers like Joe Swanberg and Kelly. We were really just trying to get behind films that we enjoy. With Kelly, I just learn from her as a filmmaker. She's been making films for longer than I've been working in this industry, and we just sort of hit if off and have become close friends over time. She's very confident as a filmmaker, and that's something that's very inspiring to be around. She really pays attention to detail and is always very focused on what she does while being pragmatic about the whole culture of making independent films. I've grown so much as a producer from working with her, and I feel very lucky to have been able to be a part of the work that she does.

AS: Sure – filmscience is myself and my partner, Vincent Savino, and for the most part we're your typical production company in the sense that we just like to make the movies that we make, and we want them to have the ability to get out into the world and be seen.

AC: Getting independent films seen is both far easier and considerably more problematic than ever before. Kevin Smith's recent Sundance spiel about "indie film 2.0" and the need to create a filmmaker-focused self-distribution revolution certainly pricked up a few ears.

AS: I think it's cool what he's doing, but there's also the Kevin Smith factor, so that's going to thrust him out further than most in terms of people willing to take that chance. It's an exciting idea and one that I definitely want to explore in the future, but I'd want to do it when I feel confident I have the right amount of resources behind it. Bypassing the traditional distribution method is sort of a per-project idea. That might work with some projects but not others, and I think there's definitely a certain expertise that distributors bring to the table. That said, it is difficult oftentimes and frustrating for independent films to be able to generate real revenue that can keep them afloat and continuing to produce independent films.

AC: It's pretty much anyone's guess what film distribution will be like in two years, much less 10.

AS: Obviously digital distribution is expanding, but I've found it really surprising in a way because I never would have believed that people would watch movies on their computers. My little cousins and relatives watch features and TV shows on their laptops all the time, and I never saw that coming. It's exciting, though. The digital delivery mechanisms will only get better, and their libraries and content will become more and more robust.

AC: It's kind of depressing to think that the communal, social, and cultural aspects inherent in the act of going out to a theatre to see a movie may be on the way out.

AS: I totally agree. I don't think they'll ever vanish completely, but ultimately the cost of keeping a theatre open is dependent on audience attendance, and theatres are going to need the larger event movies that have the marketing power to really support a theatrical release. But yeah, that communal aspect of going to the movies is so important.

We Have Met the Future, and It Is Us
Film on the Web, Part II: The movies