When Chilean filmmaker/writer/artist Alejandro Jodorowsky turns 82 on Feb. 7, he'll have the distinction of being, insofar as we know, the eldest statesman of surrealist filmmaking. His breakout film, 1970's visually kaleidoscopic, narratively ambitious El Topo, inverted and eviscerated the dying spaghetti Western, taking a moribund genre and infusing it with a mystical madness and spiritual longing that Sergio Leone and his followers had only hinted at. (It also garnered enthusiastic praise from John Lennon and a young David Lynch.)

Jodorowsky's follow-up, The Holy Mountain, cemented his name as a cinematic synonym for dreamy metaphysical nightmares and led directly to an ill-fated attempt at creating a 14-hour adaptation of Frank Herbert's Dune, which was to feature both Orson Welles and Salvador Dalí. (If only.) But it was Santa Sangre, his 1989 masterpiece of oedipal desire and blood-drenched disfigurement within and without a freakish, Fellini-esque cirque perdu, that won him the allegiance of a whole new generation of cult film fanatics who recognized it for what it was: art for art's sake. (The Alamo Drafthouse at the Ritz will host a rare 35mm screening of the film on Jan. 19.)

Twenty-plus years later, Santa Sangre is finally getting a digitally remastered, Jodorowsky-authorized, double-disc DVD/Blu-ray release from cult boutiquers Severin Films. It's been a lengthy and labyrinthine crawl into the sunlight for "the mole," however. Jodorowsky's filmic curriculum vitae is littered with abandoned or perpetually stalled projects, including his most recent near-miss, the epic "spaghetti gangster" film King Shot.

The Austin Chronicle spoke to Jodorowsky from his home in Paris about his circuitous career, the nature of his often puzzling art, and his future filmmaking plans.

Austin Chronicle: What exactly happened to your much-publicized film King Shot? That was announced several years ago as being ready to go into production – with Nick Nolte, Marilyn Manson, Udo Kier, Asia Argento, and Santa Sangre producer Claudio Argento attached – but it never materialized.

Alejandro Jodorowsky: That did not happen because of the producers. They had my script, but they wanted a more industrial product, and myself, I am not so industrial. [The producers] no longer believe in the pictures now, they believe only in the product, how do you say? A new "mission of movies," like a business, only. Then, I could not raise money after that point. But it is not over. I am always trying to make a picture. Always. Until the end of my life I will do that. You come really near sometimes, and then suddenly something happens. The politics, the world, the crisis.

AC: Are you still planning to make Son of El Topo?

AJ: I had Russian investors for the Son of El Topo. They invested some money, and I worked for three months with them making the script, making everything, and suddenly they disappeared, like the spirits! Until today, it has been six months and I have no news from them. They disappeared, and I don't know what happened, but they are not there. Maybe the extraterrestrials took them to another planet, maybe they were taken by the Mafia, I don't know.

AC: Despite the many obstacles you've encountered throughout your career, you've managed to create and sustain a stunningly personal body of work that ranges from film to theatre to graphic novels to your own complex spiritual beliefs ["psychoshamanism"]. Now your work is finding and inspiring an entirely new generation online. Does your ever-expanding influence surprise you? Or was that the plan all along?

AJ: Throughout my life I have always made my pictures without the intention to make money, that must be very clear. For me, it was never business. It was an extension of my soul. The producers want the money, but myself, I want only to work, like the person who does the decor or the electrician. Now I am trying to do my next picture, The Dance of Reality, which is also the title of my autobiography, with the goal to lose money! Now they make pictures simply to make money. Five-hundred million dollars! Incredible! I am tired of that, and so I will give this picture for free on Internet.

I am trying to give an experience that is useful, that will help you to have a more conscious life. That is what I am searching for in my art, in my images. Pictures are images, no? At the moment, I am seeing a lot of old movies, silent movies, and I have discovered again the cinematography and the tricks that they are using because there are no words, just the beautiful images. 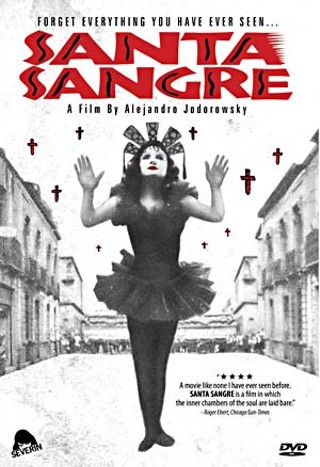 AC: What silent films, specifically, have you been watching?

AJ: Now I am interested in Murnau. You know F.W. Murnau? I'm seeing all the pictures of his now. Also Tod Browning. They made fantastic movies. And, of course, Buster Keaton.

AC: I remember a number of walkouts while watching Santa Sangre at the Dobie Theatre here in Austin during its initial run. Two decades on, do you think the reaction will be at all different?

AJ: Pictures are like food. If someone offers you food, you take it, you eat it. All of my pictures, my theatrical plays, my books, they go out into the world and they change people. I do not want to speak too highly of myself, but my pictures are very mystical, you know? They are like big bells. Boom ... boom ... boom. They wake [audiences] up and [audiences] say, "Why do you do that?" And I say to them, "Because you were asleep!"

AC: The opening of El Topo has a wonderful line: "The mole digs through the earth seeking the sun, but when he reaches the surface he is blinded by the sun." As a multidiscipline artist, have you ever been blinded by that metaphorical sun? Truth and beauty are often at odds with each other in your films.

AJ: I will tell you a story. There was a Tibetan master who said, "Nothing is real, everything is an illusion." One day, his disciples come to him and tell him that his son, his only son, is dying, and he begins to scream. The disciples ask: "Master, why are you screaming like that? Your son is an illusion." And the master says, "Yes, but he was the most beautiful of all the illusions."

Myself, I am blinded to truth. I cannot know truth. It's impossible. It's too big for my mind.

AC: Thanks to the Internet and the digital revolution, essentially anyone with the inclination can make a movie today and get it seen, even if the world of traditional distribution is falling apart –

AJ: That world is not falling apart. That world is still developing and changing. It is easy to think that that world is in trouble when the old things are replaced, but don't forget that there are new things that are replacing them. Myself, I am working intensely with the Internet. Every day I [draw] a picture and write, in Spanish, on the Internet. I put in there poetry, philosophy, art. Because of that I have an enormous amount of followers now. The Internet was not designed for that, but you can use it, anyone can use it, for art. That is why I want to make a picture for the Internet, because it's a new way to express yourself. It is the new way, not like television, not like theatrical movies, not in theatre. It is there, on the Internet.

AC: You've invested so much time over the course of your career in projects that fell apart or took very circuitous routes to finding an audience. Looking back, are you satisfied, artistically or otherwise, with the trajectory of your career thus far?

AJ: Satisfied? I am happy, yes. That takes two things, to be happy. One, to be yourself, what you are, not what the other person wants you to be. Then, realize that there is nothing for you that is not for the others also. That is important. A life without competition. Happiness is the end of competition, the end of comparing yourself to the other. If somebody gives something to you, something you didn't ask for, you need to receive it. You give me questions, I discover answers. By myself, I have nothing to say.

Severin Films Presents: Santa Sangre screens at the Alamo Drafthouse at the Ritz (320 E. Sixth) on Wednesday, Jan. 19, at 6:30pm. Severin Films will release a DVD/Blu-ray remastered version of the film on Jan. 25. You can read Alejandro Jodorowsky's blog – en Español – at www.planocreativo.wordpress.com.