No Rest for the Watcher 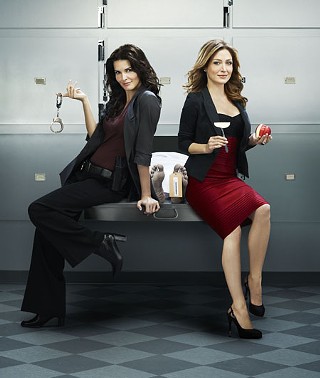 Forget reruns: New series, including TNT's Rizzoli & Isles (below), will launch throughout the summer.

Some TV historian will likely correct me, but I believe it was when CBS decided to launch the first season of Survivor in the "off" season that the idea of summer programming on network TV began to take root. This coincided with Fox, already breaking from the herd with its unconventional (for network TV) programming, starting its fall TV season late (i.e., the midseason launch). Today, ABC has finally labeled this phenomenon, calling its upcoming new June series part of its "new summer season."

Haven't seen ABC's new wares beyond extended trailers, but Scoundrels, starring Virginia Madsen, looks promising, resembling a lighter, less edgy version of the underappreciated The Riches (FX), about a family of petty thieves. Also on ABC's plate is The Gates, which appears to be a supernatural version of Desperate Housewives, along with a cop series (Rookie Blue) and a reality medical series (Boston Med) rounding out its new summer fare.

In July, CBS will pair its still-popular Big Brother reality series with the premiere of the Toronto-based The Bridge. This is another police drama with a slight twist: It focuses on a detective elected to lead the police union while rooting out corruption among the ranks. The series stars Aaron Douglas, who played Tyrol on Battlestar Galactica.

The cable networks appear to be sticking with the tried and true, with the exception of a handful of new shows, including Memphis Beat and Rizzoli & Isles. Both are police dramas, both are on TNT, and if their pilots are any indication, they are both poor vehicles for their otherwise likable stars. Jason Lee of My Name Is Earl stars in the former, with Law & Order's Angie Harmon starring in the latter. Unlike HBO's fine Treme, Memphis Beat does a ham-handed job of trying to tap into the zeitgeist of its backdrop city, capping off with a strained excuse that allows Lee to sing. Yikes! As if that's not bad enough, the divine Alfre Woodard is wasted as another in a long line of tough, women-of-color boss ladies. To her credit, Woodard manages to bring some nuance to the role, but honestly, Woodard is so much bigger than this role or this series.

Based on characters created by novelist Tess Gerritsen, Rizzoli & Isles follows the friendship of two women as they navigate through a male-dominated workplace. Harmon plays Boston Detective Jane Rizzoli, and Sasha Alexander co-stars as her medical examiner buddy Maura Isles. While their friendship is supposed to be based on the opposites-attract theory, if there is any chemistry between Harmon and Alexander, it doesn't translate onscreen in the effortless way the gal-pal relationships do on Saving Grace (with Holly Hunter and Laura San Giacomo) or even Sex and the City. Still, between the two new TNT series, I will give Rizzoli & Isles a second look.

There are only two new summer offerings that seem to be giving off any heat: The Big C (Showtime) and Rubicon (AMC). The Big C stars the always remarkable Laura Linney as a woman diagnosed with cancer and trying to get her affairs in order. In spite of the sobering subject matter, it's funny. Academy Award nominee Gabourey Sidibe (Precious: Based on the Novel 'Push' by Sapphire) co-stars as one of Linney's mouthy high school students. Over on AMC, James Badge Dale (recently seen on HBO's The Pacific) stars in the thriller Rubicon, the newest addition to AMC's small stable of critically acclaimed original series. As always, AMC is playing it close to the chest, only revealing that the series blends conspiracy theories with the timely subject of corporate greed and wrongdoing in very high places.

Otherwise, the pickings are slim for summer TV. Notable new and returning series' premiere dates are below:

June 20: Scoundrels and The Gates (ABC)

Rubicon and The Big C officially premiere in August, although Rubicon is getting a sneak screening after the Breaking Bad season finale this Sunday. Check local listings.