A Decade Under Unease

"Horror has a face, and you must make a friend of horror. Horror and moral terror are your friends. If they are not, then they are enemies to be feared."

"Disneyland? Fuck, man, this is better than Disneyland!"

Personally, I had a hangover that morning. Not a skull-stripper, more of a minor league Emo's afterburn that dissipated somewhat between downing the OJ and Ibu and hitting the shower, and then opted to linger a while, like the low drone of a bad dream that's hazed over into the kind of vague, amorphous unease that can really dial down your day. Outta coffee, to boot. Nuts.

Still, that Tuesday's film review was practically writing itself, flowing easy but intense, and becoming, word for word, one of my favorite critical outbursts yet. It didn't hurt matters any that the recut and expanded masterpiece I was keystroking myself off over was Coppola's Apocalypse Now Redux, the final cinematic word on war-as-hell-as-humanity-obliterating societal time bomb. It's a joy to scribble on and on about those rare works of inexplicable genius that you truly, madly, deeply appreciate and, indeed, love.

So I was just polishing the penultimate sentence – "Such gorgeous explosions, such a terrible vision, such an amazing work of art" – when the landline yelped, breaking both the silence and my concentration. Annoyed (what sort of person rings a writer before noon?), I let it go to voice mail. Hearing my mother's voice, unexpected and far away and too brittle-sounding on that tinny Motorola speaker, forced me to pick up. Mothers, especially elderly ones, do not for nothing telephone their offspring on deadline mornings. Not unless somebody's sick or hurt or worse.

It was, of course, all of the above. Ever the good son in times of crisis, I did as I was told and turned on CNN and saw and watched and struggled to comprehend, suddenly jonesing like Berlin-era Lou Reed for the caffeine that wasn't at hand. Ten-thirty am Austin time made it 11:30am in New York City – towers already down, news anchors reeling, frantic calls to friends and exes in the City that went (cue the dread) unanswered or netted (enter the awful) busy signals – but that day, time and its attendant sense of reality had already slewed over from garden-variety Einsteinian into something approaching the Philip K. Dickian, and it's never really snapped completely back into shape. There was a before, and now we are in the after, and the one thing that you heard repeated over and over, like some bad karma mantra, was this: "It was like watching a movie."

Cinema, particularly American cinema, has undergone a subtle shift in tone and temper, incrementally adopting an anxious Parallax viewpoint that runs the genre-bounding gamut from the obvious (Cloverfield) to the viscerally reactionary and/or mordantly comic (the Saw franchise, pretty much any film featuring zombies) to the aggressively surreal (Inland Empire, which revels in a kind of post-9/11 disassociative disorder as perpetual panic attack) to the all-too real (Taxi to the Dark Side, No End in Sight, United 93).

It's coincidental but no less uncanny that Richard Kelly's apocalyptic puzzle box Donnie Darko, a hot ticket at the 2001 Sundance Film Festival, suffered the misfortune of receiving only a brief theatrical release a few short months after 9/11. Seen in hindsight, Kelly's doom-laden film was a bellwether moment for both American cinema and a national zeitgeist that changed seemingly overnight, even if we were slow to notice the cinematic bedrock shifting beneath the popcorn-crunchy, soda-sticky flooring. (Kelly spotted it, though; 2006's Southland Tales and the more recent The Box positively overflow with jittery, fretful überangst.)

If Bertolt Brecht's axiom "Art is not a mirror held up to reality, but a hammer with which to shape it" still holds – and there are plenty of reasons to suspect the obverse has become the norm – then the events of 9/11 and the bellicose, paranoid, hallucinatory mindset they evoked and implanted in the national consciousness appear to have acted as their own metaphorical Mjøllnir, shattering not only the art/reality mirror with a Thor-like thunderclap of metal on flesh on flame, but also bending out of true our own perception and appreciation of the real and the reel. As a society of moviegoers, we have toppled through some sort of Carrollian looking glass. This is reflected, weirdly but accurately, in the un-fun-house mirror of everything from the rise of "reality" television (which is itself patently unreal) to the terminally bad box office of any film that touches in any way whatsoever on what

The New York Times journalist Dexter Filkins refers to as "the forever war."

The past decade has seen even our traditionally civic-minded silver screen heroes crossing over, in varying degrees, to the dark side, à la The Dark Knight, V for Vendetta, and Watchmen. (Apparently this is Alan Moore's decade, whether he likes it or not.)

Locally, it's revealing to track Richard Linklater's animated arc from the intellectually invigorating and potently life-affirming dream world of Waking Life, which premiered roughly eight months prior to 9/11, to the dystopic, paranoid nightmare scenario of A Scanner Darkly. (True, Linklater also helmed such nondowners as School of Rock and Bad News Bears, but I'd say the stark message of Fast Food Nation, with its meatpacking bloodbaths and relentlessly grim mood, counters at the very least the forced jollity of Bears.)

Clearly, cinematic escapism is not what it used to be when even the smartest rom-com of this year, Up in the Air, arrives with and speaks to social baggage and the simmering unease of a world – and an art form – whose roll, pitch, and yaw appear to be increasingly out of control. It's all we can do to remain seated and enjoy the in-flight movie. 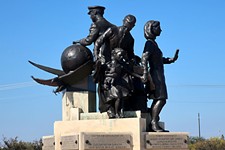 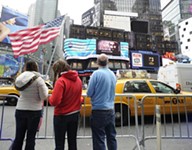