The City of Angels, Air-Kissing Austin 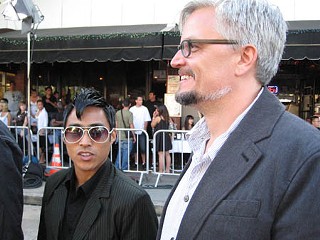 Don't know how many of you know this, but the Los Angeles Film Festival loves us! For the last few years running, Austin films (Gretchen, Chalk, August Evening) have won big awards, including the $50,000 Target Filmmaker Award for Best Narrative Feature. That is no small chunk of change, especially for independent filmmakers who almost certainly will never ever see a return on their microbudget labor of love. This can go a long way to repaying crippling credit-card debt or paying off film school student loans. Nothing says love like cash!

Of course, money won't necessarily buy love ... but a great staff, a free and fully stocked bar open every day till 1am, impeccable projection, and a receptive audience in a major media market pretty much had me wanting to tie the knot and get hitched to the festival (now that gay marriage is legal in California) by day two. Although everyone was sweating big time through one of the worst heat waves on record for June in Los Angeles (115 degrees in the Valley), the Austin film community was out in force this year.

Austin was well represented by both (frequent Chronicle contributor) Spencer Parsons' I'll Come Running, starring Melonie Diaz, in the narrative competition and PJ Raval and Jay Hodges' Trinidad, executive-produced by South by Southwest ex Matt Dentler, in the doc competition. (Disclosure alert: I've known Spencer for years as a fellow UT grad, and I edited PJ and Jay's flick.) Parsons' premiere was a sold-out affair Saturday night, with the ladies swooning over his two Danish male leads. Let's just put it this way: There's a lot of Danish on display in ICR, a welcome reprieve from the de rigueur female topless shows that accompany most American indies. Big props were also given in the press to the film's rising star, Diaz, for portraying a sexually adventurous, goofy, articulate (no mumbling here!), but thoroughly crazed woman who careens from romantic slapstick to despairing anomie to wonderful comedic effect.

Doc subjects Sabrina Marcus and Marci Bowers were on hand Sunday for the premiere of Trinidad. Both were given rousing applause during the post-screening Q&A as they fielded questions regarding their trials, tribulations, and triumphs as transsexual residents of tiny Trinidad, Colo., the sex-change capital of the world. Ex-Austinites Mark and Jay Duplass (Baghead) and Margaret Brown (The Order of Myths) made the fest for preview screenings.

A new fest like LAFF is still working out a few kinks (like no free parking), and its Westwood neighborhood setting has its share of too-cool-for-school L.A. tragedies (manufactured bodies, yuck!) on display. But all in all, in a few short years, LAFF has established itself as a viable launch alongside Sundance, SXSW, Toronto, and Tribeca, for North American features, and Austin filmmakers will now travel out each summer hoping to come away with a distribution deal or maybe some cash to begin their festival circuits.

Kyle Henry is a local filmmaker. His writing and directing feature debut, Room, premiered at Cannes in 2005. 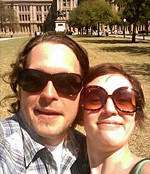 When Hollywood Met Steve Collins
... and other Austin stories from the L.A. Film Festival

South of France by Southwest
In keeping a journal during my five days in Cannes, where my first feature, 'Room,' premiered internationally, it occurred to me that it's the creative energy in Austin that carried me this far