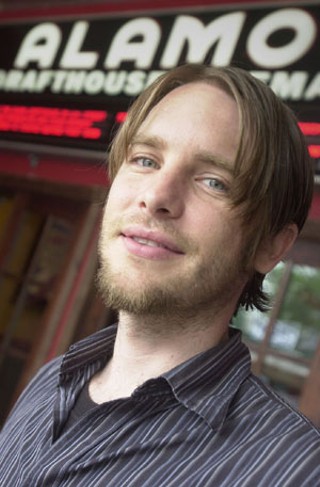 "Tomorrow is a new day, and the old ways are going to die off," says Jake, the procrastinating, post-Slacker proto-Austin partier in Kevin Ford's bitingly smart, frequently funny, and warmly wise new film, When Is Tomorrow. As played by Ford himself, the twentysomething Jake is already well on his way to becoming another would've/should've/could've-been, mired in his freewheeling, pot-smoking past but seemingly content to never quite reach the next level.

Enter Jake's best friend, Ron (a mind-bogglingly nuanced turn by Eddie Steeples, who co-wrote the script and is best known as My Name Is Earl's Crabman). Ron – or "Duke Eloquent," as his nom d'arte has it – arrives in Austin on the eve of his pal's wedding as a successful, poetically inclined New York-based yin to Jake's yang. Over the course of one night, the two will catch up and fall out in ways unexpected, with Jake's troubling inability to move forward in his life starkly contrasted against Ron's obvious maturation as both a fellow human being and a newly minted, New York-based slam-poet-cum-hip-hoppeteer.

Microbudgeted and locally shot, When Is Tomorrow nails the common experience (possibly even more relevant to the stoney artistic environs of the 512 than elsewhere) of one person's yesterdays clinging desperately to the pants leg of another's tomorrow, the best friend as ball-and-chain. As realized by longtime real-life friends Ford and Steeples, the film hits high notes of both laugh-out-loud comedy and wrenching emotional honesty.

Remarkably, it's also just one of more than a half-dozen films that Ford, a Northern California native who moved to Austin two years ago, has created with a quasi-collective of like-minded film friends that includes May and Sick Girl star Angela Bettis (who both acts in and co-produced When Is Tomorrow), director Lucky McKee (May, The Woods), Cinqué Lee (brother of Spike), and former Reel Dealer and current Ain't It Cool News hound C. Robert Cargill, who turns up here in a cameo as a former party pal who, like Ron, has begun to move onward and upward with his art.

Add to that Ford's work on the 1999 Jane's Addiction film Three Days (his "Lost Scenes" film-within-a-film actually trumps the feature it's attached to), his equally savvy DVD-doc work on Rick Linklater's Fast Food Nation, and a raft of editing and cinematography gigs with everyone from king of the closet R. Kelly to god of the chain saw (and tool box) Tobe Hooper, and you've got to wonder: What hyperproductive alternate reality did this cinematic jack-of-all-trades wander out of, and how come we've never heard of him until now?

"Lucky McKee beat me in the sixth-grade countywide spelling bee," Ford explains. "By one letter in one word."

"Prejudice. I added a 'd' on the end, because I thought they said 'prejudiced.'"

A fact which has haunted you to this day, obviously.

"Oh, man, totally. This tall guy from another school won, and years later, in high school, we became friends. One day I went over to his house and suddenly realized that this was the guy who beat me in the spelling bee all those years ago. I was like, 'Oh, no!' It almost rocked the boat too hard."

All prejudices aside, though, Ford and McKee quickly realized a shared passion for film and video in the tiny Northern California town of Mokelumne Hill, population 500-plus. McKee ended up at University of Southern California's film department, and eventually Ford followed, not enrolling but instead auditing his friend's cinema classes and becoming, as he puts it, "kind of adopted by Lucky's film friends as the orphan from up the street. But I wasn't a part of USC, and so eventually I lit out for New York with my best friend. I ended up living there from '95 to 2002, after which I went back to Los Angeles to, as it turned out, work as an editor on Lucky's film May, which starred Angela."

"Steeples ... was basically the first friend I met when I moved to New York. He was acting in off-Broadway theatre, and I was an assistant director on a play, and we just hit it off immediately, and when I went back to L.A., he came with me. Which was great because he wanted to act and do stand-up, and I wanted to direct and shoot, and we were both writers. All we had to do was look across the living room for inspiration."

While in New York, Ford and Steeples ended up making "a lot" of videos together, with Ford fueled by his discovery of the avant-garde Anthology Film Archives, which had been founded by Jonas Mekas, Peter Kubelka, and Stan Brakhage as a museum for experimental filmmaking. "That really blew my mind, because it was so different from the way people were being molded in L.A.," recalls Ford. "Eventually, Steeples and I began making these odd shorts and experimental films, which, after my move back to L.A., led to our first feature, in 1999, which was [a] cross-country road movie called Caravan Summer."

That film, in turn, resulted in a series of increasingly ambitious productions (Lovindapocalypse, People Are Dead, Last Days of America) featuring Ford's tight-knit community of artistic collaborators – Bettis, Cargill, Steeples, and others. All of which, in hindsight, led Ford finally, ultimately, to Austin.

"Angela and Lucky and I were on our way to Spain to go show May at the Sitges International Film Festival in 2002, and somehow the idea came up that we'd do a road trip from L.A. to Austin to visit her family here, and then from here go on to Spain.

"Now, I had heard a lot about Austin previously," Ford continues. "Throughout my 20s, no matter where I was, people would always say to me, 'You belong in Austin,' so much so that it got to the point where I almost started to resent it. I was like, you know, what's up with this Austin place? It sounded like a cult, right? The cult of Austin. And being from California, I always thought of Texas as one big, dusty flatland with, like, tumbleweeds and cowboys and really, really hot weather."

And then, predictably but no less charming for it: arrival, revelation, and epiphany.

"It was like an oasis, you know? It was green and really, just, so not what I had expected."

Ford being Ford, he immediately began making a movie – and by immediately we mean within 24 hours of having arrived in Austin – which would end up as Lovindapocalypse 2 and feature virtually all the components of what was by now known as Mo-Freek productions. "I discovered the Magnolia Cafe on Lake Austin Boulevard, and I thought it was great because I'd order coffee and this guy Ross, the manager, would bring me a whole pot at a time while I was sitting there writing at that table they have out front. He was like, 'Chill out; do your writing; smoke your cigarettes; it's all cool.' And that just blew my mind because, man, that would never happen in L.A.! Long story short, that one visit to Austin was, in every sense, a life-changing experience for me, right?

"I feel more grounded here than any other place I've lived. I'm not from here, but there's a whole layer of stress and issues that are gone now that I'm in Austin, and that's allowed me to be very productive. And as long as I can keep bringing my friends into my filmmaking, well ..."

Ford trails off here, before adding: "I'll put it this way: We have three or four films ready to go here in Austin. Some of them require more budget than When Is Tomorrow, and others don't – they're almost documentary-style. We could pay for them right now. So I feel like this is a place where I can really grow. I can grow. I feel like I can enjoy my life and be an artist."

Which we think, frankly, makes for a thoroughly kickass addition to the Five-One-Deuce's filmmaking community. And they're making the rest of us look like, well, slackers.

"Angela and I are working on a script that's set against this weird moment in Austin that's happening right now," says Ford.

"It's no longer the way it was in the late Eighties, early Nineties – when Slacker was shot – but it's also not anything like what it's going to be in, say, 15 years. It's in transition. And what's funny is that [Bettis] and I have such different reactions to this transformation, because she was born here, left for 15 years, and then moved back after being out in the world, and she's like, 'What happened to my town?' And me having moved here relatively recently, I don't recognize all those major changes, but I do see all the cranes."

Sitting outside of Jo's Coffee on Second between Lavaca and Colorado, I gesture to the new City Council complex and mention to Ford that I spent a major chunk of the Eighties and Nineties right there attending Austin Punk Rock School 101 at the late, great Liberty Lunch.

Ford grins. "You'll appreciate this, then: The name of that movie I was just telling you about? It's called Liberty Lunch Is Not Dead. We got the idea from listening to her and her friends saying how this town has sold out, things aren't what they used to be, all the cool places are gone, and that kind of thing. So the story starts from that sort of extreme reaction that longtime Austin residents are feeling, but, as it moves on, they come to find that the very thing they miss most about 'old Austin' is actually inside them, a part of who they are and not so much the bricks and mortar and physical manifestations of the city itself. That legendary version of Austin? That's in your heart, and you can bring it back anytime you want. It's not gone at all."

When Is Tomorrow screens Saturday, May 10, at 10:15pm, and Sunday, May 11, at 9:45pm, at the Alamo Drafthouse at the Ritz with Kevin Ford, Eddie Steeples, and Angela Bettis in attendance. Steeples will perform stand-up before each screening. See www.mo-freek.net and www.originalalamo.com for more.