My grandfather's photography studio made him rich and Bettie Page famous. It also made him into a target for Fifties censors. So, what has director Mary Harron made of him? 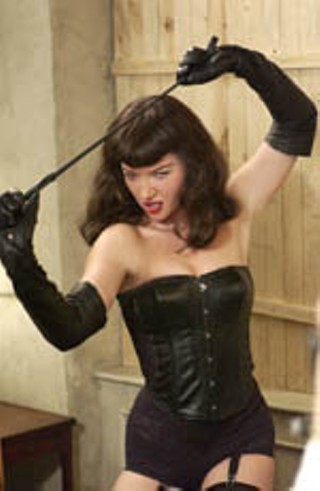 "Her story is interesting. It's a culmination between the very funny, cheesecakey pin-up stuff and the bondage stuff. She's still the same person in both sets of worlds. She's always funny and cheery even in the Klaw stuff ... a hidden world of sexuality that we have discovered in the last 20 years that has very much come above ground, but with something hidden and secret. Without that bondage stuff, I don't think she would be nearly as famous as she is today. It's because of Klaw that Bettie got rediscovered." – Mary Harron, director of The Notorious Bettie Page

The lights dimmed in the theatre for a screening of Mary Harron's The Notorious Bettie Page as my thoughts settled on a grandfather who died roughly 16 months before I was born. His death remains the stuff of family legend.

Labor Day weekend, 1966: A 55-year-old Irving Klaw awoke with pain on the right side of his abdomen. A family friend, a doctor, diagnosed him with appendicitis. Since the ailment was in its early stages, the physician told Irving not to panic, but suggested he pack a bag and check into the hospital. Stubborn to the last, Irving decided to go to work. Later that day, he was found dead from peritonitis. At least according to my mother.

My cousin Ira Kramer, son of Irving's sister Paula Klaw, tells a different story. Irving, who had been under treatment for an ulcer, visited the same family friend, who told him to just take some antacids and not to worry. Later that day, he was discovered dead from peritonitis.

His son Arth has another theory: He believes Irving woke up with the pain, took some antacids, and went to work. Irving Klaw hated doctors.

"When you think of the Klaws – all the photographs – you naturally envision [them] it in black and white. When it came down to write the first Miami scene, I just thought a blue wave. It was just an instinctive thing. [After all], the Fifties are both black-and-white and color." – Harron

The Notorious Bettie Page opens in a store, shot in black and white, similar to the type pioneered by my grandfather. In 1938, after an unsuccessful four-year stint as a furrier, the 28-year-old Irving Klaw opened a secondhand bookstore. As with most start-up bookstores, sales were slow.

Vandalism of magazines was a common problem. Irving routinely discovered issues with images ripped out. Eventually, he caught a young girl tearing out photos of Clark Gable. Rather than hide the magazines behind a counter, the savvy businessman sensed an opportunity. He set up a small box of used movie stills. When these quickly sold, he contacted the studios for more stills. Soon, he dropped books all together, focused on motion picture memorabilia, renamed the shop Movie Star News, and dubbed himself the Pin-Up King.

Around the time that Klaw started his bookstore, he also began a mail-order magic trick business, the Nutrix Novelty Library. Like book sales, magic novelties were a financial bust. However, Klaw soon realized that mail order could enhance his movie-still business. He placed advertisements in magazines and shipped catalogs. Before long, mail order was the mainstay of Movie Star News.

"There's one thing [in the film that Ira Kramer] objected to. When you first meet Irving, he says, 'There's some food, some beautiful sliced brisket.' [Ira] thought that was clichéd Jewish New York. What I wanted to get across was that he was much more about food and hospitality. It wasn't like this heavy bondage S&M atmosphere. Have a sandwich. Go change over there. We wanted to keep this light businesslike atmosphere, which I think was accurate." – Harron

Sometime between 1947 and 1950, Irving Klaw was approached by a prominent lawyer with some "special needs." He offered to pay all the costs if Klaw would produce original bondage pictures for him. Klaw would retain the rights. His first bondage model was Lili Dawn. She was photographed in midtown studios by various freelance photographers. Eventually, Klaw rented the third floor over Movie Star News and turned it into a shooting studio. By 1955, Irving Klaw was allegedly grossing $1.5 million a year, primarily through mail order of his fetish pics.

While he worked with many different models, Klaw's images with Bettie Page were his most popular and best known. He met Page when he contacted camera clubs looking for models for his burgeoning fetish photography business. Page was the most popular pin-up of the 1950s, appearing on more covers than anyone else in the decade. While she was Playboy's Playmate of the Month for January 1955, Page is best remembered for Klaw's bondage photos and the nudes by Bunny Yeager.

Klaw always went to great pains to make sure his photographs contained no nudity, which would make the material pornographic and hence illegal to sell via mail. Models were often required to wear two pairs of panties so that no pubic hair could be seen.

"When Paula talked about [the business], you always felt like they were selling Girl Scout cookies." – Harron

Irving Klaw had an unusually close relationship with his sister Paula. The story of Irving and his business has primarily been told through her anecdotes. Paula often ran the front end of the store, but when Klaw began to produce his own photographs and films, Paula befriended the models, often treating them as her own daughters. When another photographer wasn't available, she would grab the camera and shoot the photos. In 1963, in an attempt to satisfy the courts, Irving destroyed his photographs and movies, Paula, unbeknownst to her brother, preserved his legacy – and her financial future – by hiding thousands of the images. After her brother's death, she became fiercely protective of his reputation and his work. Without Paula's foresight, Irving Klaw might have been just an odd, barely remembered footnote in the annals of pin-up history and Fifties puritanism.

"In the end, the movie isn't really about what happened to [Bettie]; it's about this time in the Fifties. It's about Irving, Paula, Bettie, the Senate hearings, and all that. [It] was the last gasp of heavy Fifties censorship. Playboy and the Sixties openness about sex are just around the corner." – Harron

The FBI received complaints in 1942, 1944, and 1945 about Movie Star News catalogs. All three times, the bureau declared that the material, "though questionable is not definitely obscene."

In 1950, things changed when the special agent in charge of the New York office issued an internal memorandum to J. Edgar Hoover. The document, "Irving Klaw Interstate Transport of Obscene Matter," stated that "Individuals who handle such material, however, are also frequently found to handle material of a definitely obscene nature." The FBI hounded and harassed Klaw for the next 14 years.

"Chris Bauer [as Irving Klaw] was fantastic with his performance in the hearings. He was like a little kid, pained and so embarrassed." – Harron

When Irving Klaw was brought before the 1955 Senate Subcommittee on Obscene and Pornographic Materials, his lawyer had him plead the Fifth – even though Klaw had neither broken any laws nor had anything to hide. The lawyer was afraid that Klaw would not be allowed to fully explain his answers. He was held in contempt of Congress. The entire sensationalistic episode was plastered all over the New York press, wherein Klaw became known as the "Smut King."

Klaw experienced further legal problems: His mail was often intercepted by the FBI, and his phones were bugged. As late as 1964, he was brought before a federal court on charges of conspiracy to send obscene material through the mail.

"We took some of the letters [between Alfred Kinsey and Irving Klaw] and put it in as dialogue. There's a scene where he is sitting outside the courtroom with Paula, and he says, 'Look at these photographs. What are they about? Spanking. And that's on the front cover of The New York Times.'" – Harron

My grandfather never really understood what he had done wrong. He had never knowingly broken any laws. He always paid his taxes. He was just a businessman. For the remainder of his life, Irving Klaw would collect bondage images from wherever he could find them, hoping to redeem his reputation by demonstrating that others were producing similar images without legal problems.

Four decades later, then, the lights came up and I sat for a moment, startled. A man who for most of my life was more legend than fact had appeared before me, 20 feet tall. While I have photographs and home movies of my grandfather, the images in The Notorious Bettie Page of a distraught Irving sitting with Paula outside of a courtroom will stay with me for the rest of my life.

"People now are very interested in the Fifties ... going back to it, but also discovering the hidden aspects. In a way, it was the height of American stability and prosperity and everything's wonderful. At the same time, there's all these hidden darker things. Bettie represents both the public face of the Fifties ... all buoyant and healthy and sexy ... and her hidden photographs are the darker side." – Harron