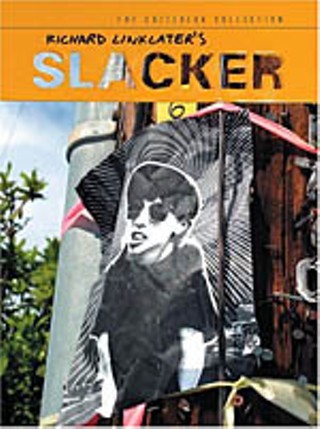 It's been 14 years in the making, but the film that planted Austin on the topography of the national consciousness has finally arrived on DVD in an appropriately, gloriously bells 'n' whistles package from the Criterion Collection, in an equally gorgeous package courtesy of local design guru Marc English of Marc English Design.

Slacker has, in the years since its 1991 release, become a genuine cinematic watershed event: Richard Linklater's rambling story of Austin life at the tail end of the first Bush reign is now a snapshot of a time and place no longer so easy to discern. There was no need for the rallying cri de coeur "Keep Austin Weird!" in '91: One look at Slacker and you knew the city was plenty weird already; the mad parade of misfits and post-collegiate denizens of the Drag that wandered in and out of frame, discoursing at length about whatever struck their pleasingly warped fancies, was as purely Austin as could be. The legacy of the cosmic cowboys and the Armadillo and Janis and JFRNKLN seeped into Austin's streets – and into Linklater's film – like rainwater pooling inside statuary, distorting it from within, remaking itself in its own anti-image with Glass Eye and Woodshock and Liberty Lunch. That was then, however, and now Les Amis is gone, a Starbucks in its stead, Mad Dog & Beans is a parking lot, and Madonna's Madge and penning kiddie lit. Charles Gunning, Louis Mackey, D. Montgomery, and others exist only in our memories.

Now the term "slacker" is a pejorative. Back then, it was a badge of honor.

As with any Criterion DVD, the film itself is only half the story, or, in this case, let's say an eighth or so. Wrapped around Slacker is, among many other items, Linklater's other film – his first, 1988's minimalist road epic It's Impossible to Learn to Plow by Reading Books; a history of the Austin Film Society told through its fliers; a grief-and-joy-inducing 10-minute trailer for Nancy Higgins' documentary on the greatest Parisian cafe never in Paris, Viva Les Amis; a Linklater/Lee Daniel-lensed minidoc on the acid-drenched 1985 Woodshock festival; essays and reminiscences galore; and enough enlightening, interesting, and occasionally hilarious commentary tracks to steal a weekend or two from your life and replace it with, finally, something approaching a quiet glory.

All of this swaddled in English's immensely complementary design and a 68-page booklet (including essays by John Pierson, Ron Rosenbaum, Chris Walters, Michael Barker, and Monte Hellman) that echoes the narrative tropes of the film like an expansive mirror.

Linklater has gone on to be one of the most visionary directors of our time: part Bresson, part Fassbinder, all of his heroes (and ours) rolled into one Austinite with a dead-bang eye and a true ear. Slacker has, rightfully and justly, become a cult film of enduring significance. There's still no template for living life, just as there was no template for Slacker, and that's just as it should be.

Richard Linklater will sign copies of the Criterion Collection's Slacker at Waterloo Records on Friday, Sept. 24, at 5pm.