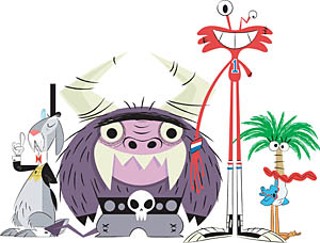 I want Craig McCracken to be my friend. Not just because it would be cool to pal around with the creator of The Powerpuff Girls, or for him to fulfill my fantasy to have him render me as a Powerpuff Girl (in orange, with braids, named Binky). It's a good idea, I think, to have a friend who hasn't packed up and put his child self into storage. This is proven in McCracken's newest Cartoon Network series, Foster's Home for Imaginary Friends.

With Imaginary Friends, not only does McCracken move to a longer format and fleshier characters, but he starts from script, instead of storyboards, to create each 22-minute episode.

"It takes so long to storyboard that you feel bad making changes to it," McCracken says in Cartoon Network press materials. "In an 11-minute show (as in Powerpuff Girls), you only have a 3-5-minute story. With a 22-minute episode, I can tell an 8-10 minute story and still have plenty of room for 'business.' There's time for characters to be funny and be themselves and tell a good, meaty story."

Eight-year-old Mac is the show's heart. Smart and sensitive, Mac is tormented by his mean brother Terrence, a contemporary Eddie Haskell made of spit and vinegar, pimpled and well-schooled in the art of rope burns, noogies, and wedgies. Mac's imaginary friend is Bloo, a blue blob of goofiness who veers toward adventure when he's not warning Mac of the impending whirlwind known as Terrence. Like all nasty brothers, Terrence blames household mischief on Mac and Bloo, prompting their mother to ask what no child with an imaginary friend wants to hear: Aren't you too old for an imaginary friend? Despondent at the idea of having to give up his friend, Mac learns about Foster's Home for Imaginary Friends. He and Bloo check it out, where they meet all manner of imaginary friends, discarded and forgotten by their original child creators but hoping for adoption by a new child.

The imaginary friends are as varied as children. None are precious, puffy playthings, but are as wicked, if not downright bizarre, as the children who created them. Wilt is the most social of the group. His mismatched features make him potentially frightening (to Mac and Bloo, he's just really tall), but his graciousness makes you forget his lopsided physical attributes.

Eduardo has thick green horns, fangs, purple hair, and gruesomely large eyes. He's the scaredy-cat of the group, but willing to protect if his friends are in danger.

Coco is a crazy bird. Literally. She lays multicolored, surprise-filled plastic eggs that are often used to save the day. It would be inaccurate, meanwhile, to call Mr. Herriman a bunny. He's a courtly lupine creature, innkeeper for Foster's, and the original imaginary friend for the home's namesake, Madame Foster. Her granddaughter, Frankie Foster, along with Mr. Herriman, keep Foster's up and running. My favorite character of the bunch is the snooty Her Royal Duchess Diamond Persnickety the First, Last and Only, otherwise known as Duchess. Her face looks like a Picasso portrait with an enormous elephant's snout. She thinks she's beautiful. The Foster residents think she's a royal pain in the backside.

Like McCracken's Powerpuff Girls, Imaginary Friends tweaks the notion of children as obedient creatures chasing butterflies or angelically dozing at their mother's breast. McCracken's kids have scabs, dirty hands, messy hair, are sometimes naughty, but eager to be good – if it's not too boring.

Although the TV season is being dismantled, the fall season, when the broadcast networks traditionally launch their new shows, is not dead. In fact, it's gearing up. Along with this comes new ways to set shows high on viewers' radar. In an unprecedented move, the pilot episode of the WB's new drama, Jack and Bobby, will premiere online to AOL's broadband subscribers for a week prior to the show's official premiere on Sept. 12. Well, the move isn't entirely without precedent: A repeat episode of the WB's Everwood appeared on AOL in March in an effort to attract new viewers.

The WB webcast further blurs the lines between the computer, often regarded as a graphic medium, and TV, a storytelling medium. And for those who understand how young people are attached to their computers, often shunning TV, it's understandable why networks are looking for ways to exploit the power of one to enhance the other.

"I have a 16-year old boy," says Jack and Bobby executive producer, Tommy Schlamme (The West Wing), in the July 26 issue of Television Week. "To say his computer is a very good friend is underestimating the intimacy he has with that computer. ... The computer is going to be used to tell stories, and that is the direction we're moving in."

Jack and Bobby is one of the most highly anticipated new series of the fall season. There's good reason for this. The early review tape I saw of the pilot episode is superb. The series follows the lives of two high-school-aged brothers, one of whom will be a future president of the United States. It stars Christine Lahti and newcomers Matt Long as Jack and Logan Lerman as Bobby. The pilot episode was filmed in Austin.