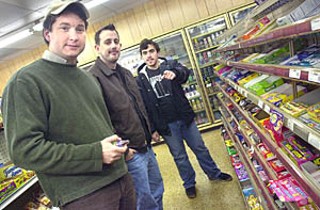 Local heroes (l-r) Burnie Burns, Geoff Fink, and Jason Saldaña use video games to make movies. They're really quite well-known for it. (Photo By John Anderson)

The boys at Red vs Blue don't have illustrious film careers. "I'm a failed independent filmmaker," says founder Burnie Burns, pointing to co-creator Jason Saldaña, "and he's a craft service guy whose claim to fame is listening to Britney Spears pee while singing 'Like a Virgin.'" A third co-conspirator, Geoff Fink, is a tattooed ex-Army reporter, who affectionately christens Burns "a no-talent hack."

It may be no coincidence that Red vs Blue (which consists of a Web site, a movie, and a production company technically named Rooster Teeth Productions, though they say no one knows them by that name) is known on the Internet for mocking the military. Employing a new kind of moviemaking that is much cheaper than celluloid, their weekly five-minute serials condense war into a witty battle of primary colors. Last year's Red vs Blue: The Blood Gulch Chronicles won Best Picture, Best Independent Picture, and Best Writing at the Academy of Machinima Arts & Sciences. They've presented their films on Spike TV and twice at Lincoln Center. But these Austin jokesters, dubbed "Clerks meets Star Wars" by The Village Voice, are convinced that most of their fellow Austinites have never heard of them.

"Well, we did get recognized at a Game Stop once," admits Fink. "It was kind of awkward."

Many people haven't jumped on the Red vs Blue bandwidth wagon because Machinima is a relatively new concept: Filmmaking meets 3-D video games. Burns, who uses the popular game Halo for his creations, elaborates: "We take one of the characters in the game, and we use him as a cameraman, where literally you are looking through his eyes. We take out all of the game information, like the score, ammo, and radar, and then use the existing video game engine as a way to animate our scripts."

With Machinima, anyone with a computer can make films. "All you would need is the game itself, permission from the people who make the game, a decent mic, and a computer to capture the video and edit it," says Burns, who uses a Windows-based system and Adobe Premier. "You could probably get going for $1,200 to $1,500."

Machinima also reduces the time required by traditional filmmaking. "We made a 90-minute piece of animation in six months, with four people working on it," says Burns, who can now make a complete five-minute short in 25 hours. "Regular filmmaking is really an extended lottery ticket that you're investing in and hoping in the end you're gonna make it. With something like this, it's very low-cost going in."

The second part of the Red vs Blue secret is the Web. "What's different," says Saldaña, "is that we're using the spirit of the Internet. We're putting it there every week and getting people to come back. Nobody else is doing that."

Plus, with Internet-based filmmaking, you don't have to wait for the critics. "You have to have pretty thick skin," says Burns. "On the Internet, you can tell people whatever you want, and you can ask for whatever you want. ... The audience dictates a lot."

The Web's accessibility allows filmmakers to amplify audiences, too. In virtual box-office numbers, Red vs Blue does quite well. "We get 50,000 to 100,000 hits a day," reports Fink.

But these guys aren't making money with every hit. "We sell a ton of DVDs, even though everything we make is on the Internet for free," explains Burns. "Logic would say if you're going to sell a DVD, don't put it online, don't give it away for free. But it works, and it works really well."

If these guys are such a hit all over the country, why do they feel unknown in their hometown of game and film enthusiasts?

"This is the first interview we've done in Austin," Burns frets. "We've done tons of interviews, including the L.A. Times and The New York Times." Fink agrees in jest, describing the turnout at Lincoln Center: "We had kids drive up from Mississippi and Michigan, and we get shunned by our own damn city?"

They are positive that SXSW will change things. But how will they cope with their muted celebrity until then? "What am I supposed to say?" asks Saldaña. "On the Internet, baby, I'm so famous?"