Foleyvision does the Turkish 'Star Wars' 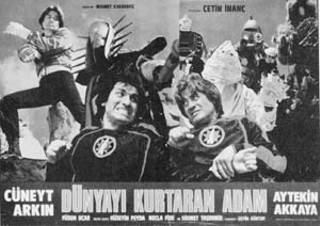 A long time ago, in a galaxy far, far away (somewhere around Istanbul we suspect), Turkish filmmaker Çetin Inanç helmed his space opera masterpiece Dünyayi Kurtaran Adam, aka The Man Who Saves the World. More popularly known in the West as the Turkish Star Wars, Inanç's microbudgeted quasi-epic from 1982 is part loving tribute to George Lucas' finest hour and part blatant rip-off. Employing actual Lucas-lensed footage "liberated" from its Hollywood predecessor, Inanç and company make use of the rugged, Tatooine-like terrain of their native country while crafting a film that rivals anything Sid and Marty Krofft ever managed in terms of sheer goofball ineptitude. And yet, as the spike-helmeted Darth Vader stand-in battles a pair of Gil Gerard-era Buck Rogers types, it's hard not to feel a surge of misplaced pride in this director who attempted so very much with what surely was so very little.

Then again, the whole production is in Turkish sans English subtitles, which makes the plot somewhat more difficult to follow.

"This is the first English translation of this film ever in the world," says Moran, who along with Golden Arm Trio's Graham Reynolds and a pair of voice actors will provide a literal translation of the onscreen action and appropriate Foley work.

Moran's crew has taken dialogue cues from a Turkish-speaking UT student kind enough (or foolish enough, depending on your tolerance for blotchy Turkish films featuring poorly done Robbie the Robot knockoffs) to translate the film into English, and although much of the screen is often rear-projected shots of Lucas' film framing Turkish kung-fu fights in the desert, the real story is more enticingly original than you might think.

"Basically what happens," says Moran, "is that the bad guy, this sort of Ming the Merciless guy, shoots the Turkish heroes out of the sky, and they then crash land on the planet – which is actually a chunk of the Earth that's broken off for some reason. There's also an iron brain that has gathered the power of all of the brains of the dead of the world and a magic iron sword. There's a lot of magic stuff going on in the film for some reason."

That said, Dünyayi Kurtaran Adam holds its own against, say, Roger Corman alum Jim Wynorski's worst work by sheer virtue of its over-the-top, take-no-prisoners badness. Where else can you see the great pyramids of Egypt doubling for an alien world, production values rivaling those of Devo's seminal "Whip It" video, and more than a little fundamentalist Islamic undertone?

Only in Foleyvision, and thank goodness.

Dünyayi Kurtaran Adam aka The Man Who Saves the World aka the Turkish Star Wars premieres in Foleyvision on Sunday, Feb. 22, 7 and 9:45pm at the Alamo Drafthouse Downtown (409 Colorado, 476-1320). See www.drafthouse.com for more information.