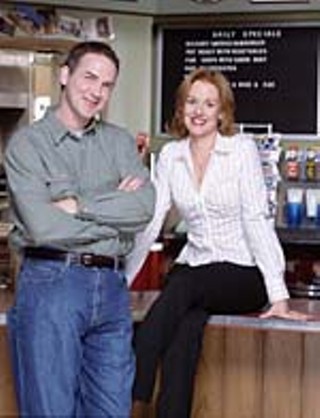 A Minute With Stan Hooper

Finally, there is something to laugh about on network TV. After watching hefty portions of blah, the first really good sitcom, A Minute With Stan Hooper, premieres Wednesday.

Norm Macdonald stars as nationally known TV commentator Stan Hooper (think Charles Kuralt), whose weekly "Minute With" is featured in a newsmagazine. But Hooper feels like a fraud, living in New York, waxing nostalgic about small-town life. So, he and his wife Molly (Penelope Ann Miller) move to Waterford Falls, Wisc., where old-fashioned values run deep, nature is still pristine, and where, because of the magic of technology, he can shoot his spots direct from Waterford Falls to the rest of the world.

If it sounds like another annoying big-city-fish-out-of-water comedy, fear not. A Minute With Stan Hooper goes a long way to break the mind-numbing stereotypes played for dumb yuks on shows like Married to the Kellys (ABC). On that show, Breckin Meyer's supposedly urbane Tom is constantly befuddled by the ways of the peculiar Kansas City family into which he's married. According to Married, Kansas City is a small town, instead of an ethnically mixed city capable of supporting a Major League Baseball team. There's a decent music scene and please -- for barbecue, there's no place like Gates! But I digress.

Unlike Married, Stan Hooper's sophisticated appreciation of small-town life is constantly challenged. Charmed by the small-town diner and its staff, he learns something that never occurred to him about their relationship to one another -- on the air. Refreshingly, it's Hooper's narrow-minded notions of small-town life that are the brunt of the jokes, not the folks themselves.

Well, there are some peculiar characters in Waterford Falls. Fred Willard is enjoyable as cheese mogul Fred, who carries string-cheese logs like fine cigars. When the Hoopers locate a rental property, they're thrilled to find it fully furnished (the owner is conveniently in prison for tax evasion). What they don't expect is that the terms of their lease include Gary, the butler (Brian Howe), who has a knack for being helpful when least expected, and absent when needed.

Macdonald is fine as the perplexed Hooper, mixing in a bit of Bob Newhart with a touch of Andy Griffith and a large dollop of his usual droll self, making A Minute With Stan Hooper the most enjoyable network sitcom to premiere this season. But wait until I tell you about another Fox comedy, Arrested Development coming in November. More on that next time. As always, stay tuned.

A Minute With Stan Hooper premieres Wednesday at 7:30pm on Fox.

The long-awaited premiere of 24's third season airs commercial-free on Tuesday (Oct. 28) at 8pm on Fox. The series picks up three years later, with Jack Bauer (Kiefer Sutherland) back in the fold heading a special counterterrorism unit.

The OC returns! Here's the skinny: Marissa may be facing rehab. Julie blames Ryan for everything. Sandy gets a new job with a very attractive and attentive co-worker. Kirsten gets jealous. Summer and Seth plot to free Marissa, and Ryan decides to help. The OC premieres Wednesday (Oct. 29) at 8pm on Fox.

The divine Eliza Dushku (Buffy the Vampire Slayer, Angel) stars as Tru Davies, a medical student who discovers that dead people do tell tales, in Tru Calling. It's a bit of a shock to see Dushku play a good girl after her delicious performance as the evil Faith in Buffy. But hey, it's time to move on. This entertaining, supernatural thriller may be just the ticket to bring Dushku to a wider audience. Tru Calling premieres Thursday (Oct. 30) at 7pm on Fox.

Professor Griffin (aka Joseph Fotinos) and pals make the rounds this Halloween season with several local TV events. On Saturday (Oct. 25), Professor Griffin appears live for a screening of The Nightmare Before Christmas on WB affiliate KNVA at 2pm. He will also host a double feature of A Nightmare on Elm Street Part 2: Freddy's Revenge and Once Bitten over on Fox affiliate KTBC -- check local listings.

On Halloween night, Professor Griffin's Midnight Shadow Show airs for a four-hour marathon. Included is a tribute to Hammer Films, followed by the Freddy and Jason tribute show, ending with the premiere of two new episodes: "The Devil's in the Details" parts one and two, featuring To the Devil a Daughter -- the last horror film from Hammer studios.