And the Nominees Should Have Been ... 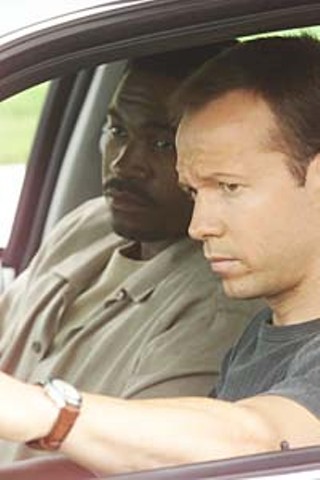 And the award for most overlooked goes to ... NBC's Boomtown.

Outstanding Drama series nominees: CSI: Crime Scene Investigation (CBS), Six Feet Under (HBO), The Sopranos (HBO), 24 (Fox), The West Wing (NBC). I only have one thing to say: Where the hell is Boomtown? The character-driven series with a Rashomon style of storytelling made me like this show in spite of the fact that I generally don't like crime/cop shows. This year's 24 was marred by the inclusion of lame-duck characters from the previous season (Kim Bauer and Sherry Palmer). It was a lackluster season for The West Wing, and The Sopranos is always deserving of recognition, but CSI? Alias (ABC), The Wire (HBO), Third Watch (NBC), and even CSI: Miami (CBS) are better. Six Feet Under wrapped an excellent third season and is most deserving of this year's award in the current crop of nominees.

Outstanding lead actor in a drama: Last year's surprise winner, Michael Chiklis from The Shield (FX), is back, along with Peter Krause (Six Feet Under), James Gandolfini (The Sopranos), Kiefer Sutherland (24), and Martin Sheen (The West Wing). Omissions include Donnie Wahlberg and Mykelti Williamson, both of Boomtown.

Outstanding lead actor in a comedy: The nice surprise in this year's list is Tony Shalhoub (Monk). But where, oh where, is Zach Braff from Scrubs (NBC)? Other nominees include Bernie Mac (The Bernie Mac Show), Larry David (Curb Your Enthusiasm), Ray Romano (Everybody Loves Raymond), Matt LeBlanc (Friends), and Eric McCormack (Will & Grace). Other gripes -- trade Romano for George Lopez. Romano won last year, let's move on.

Outstanding lead actress in a drama: Jennifer Garner (Alias), Marg Helgenberger (CSI), Frances Conroy (Six Feet Under), Edie Falco (The Sopranos), Allison Janney (The West Wing). Yes, yes, yes to Falco, who seems to get better each year. Yes to Jennifer Garner. Conroy and Janney are part of an ensemble. As for Helgenberger -- the marvelous Khandi Alexander of CSI: Miami is better.

Outstanding lead actress in a comedy: Patricia Heaton (Everybody Loves Raymond), Jennifer Aniston (Friends), Jane Kaczmarek (Malcolm in the Middle), Sarah Jessica Parker (Sex and the City), Debra Messing (Will & Grace). I've turned a deaf ear to Heaton and Kaczmarek's screeching performances. I like Messing but love Parker. Missing in action are Lauren Graham of The Gilmore Girls and the adorably doofy Sara Rue of Less Than Perfect.

Outstanding supporting actor in a comedy: Peter Boyle and Brad Garrett (Everybody Loves Raymond), John Mahoney and David Hyde Pierce (Frasier), Bryan Cranston (Malcolm in the Middle), Sean Hayes (Will & Grace). Missing are John C. McGinley, Donald Faison, and Neil Flynn, all from Scrubs, and Andy Dick and Zachary Levi, both from Less Than Perfect.

Outstanding supporting actress in a comedy: Cheryl Hines (Curb Your Enthusiasm), Doris Roberts (Everybody Loves Raymond), Cynthia Nixon and Kim Cattrall (Sex and the City), Megan Mullally (Will & Grace). Cynthia Nixon is long overdue for some recognition, but where are Sarah Chalke and Judy Reyes from Scrubs, Andrea Parker from Less Than Perfect, and Shawnee Smith from Becker?

Outstanding writing for a comedy series: The Bernie Mac Show, Everybody Loves Raymond, Lucky ("Pilot"), Sex and the City. I'm over Raymond. Last season's Bernie Mac veered from funny to disturbing, and Sex always pleases (hee hee). The pilot for Lucky was a breath of fresh air compared to the usual fare. For that alone, I'd vote for it.

Outstanding writing for a drama series: Six Feet Under, The Sopranos (three scripts nominated), The West Wing. Boomtown's pilot and "Fearless" were superb and should have been included.

New to the Primetime Emmy Awards presentation is the reality/competition category (previously included in the technical awards ceremony). The nominees are: AFI's 100 Years ... 100 Passions, The Amazing Race, American Idol, 100 Years of Hope and Humor, and Survivor. The underappreciated Amazing Race would be a worthy recipient, but I wonder if the Emmy folks will reward Idol for its popularity? Nah, they'll stick to the more traditional AFI's 100 Years or the Bob Hope special.