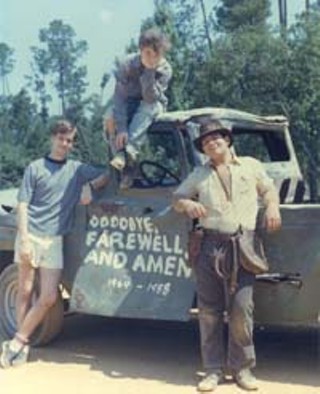 Eric Zala, Jayson Lamb, and Chris Strompolos at the tail end of their yearslong odyssey of remaking Raiders of the Lost Ark

"Dear Eric," it began. "Wanted to write and let you know how impressed I was with your very loving and detailed tribute to our Raiders of the Lost Ark."

The framed letter hangs in Eric Zala's office, and as we talk on the phone from Florida, where he works in the gaming industry, he reads it proudly. "I saw and appreciated the vast amounts of imagination and originality you put into your film," the letter continues. "I'll be waiting to see your names one day on the big screen." A letter like that could have signaled the start of something. But for Eric Zala, it signaled the end.

The story begins in Biloxi, Miss., with three boys -- Eric Zala, Chris Strompolos, and Jayson Lamb -- and one adventure hero, Indiana Jones. Handsome, endlessly resourceful, as quick with a whip as he was with a quip, Indiana Jones hijacked the heart of America in the summer of 1981, and our trio of 10-year-olds proved no exception. So the next summer, the three began filming a shot-for-shot remake of Raiders of the Lost Ark. Seven years later, they wrapped.

The film, making its world premiere at the Alamo Drafthouse this Friday, is nothing short of stunning. Everything is here -- the rolling boulder, the live snakes, the heart-thudding truck sequence, and everywhere flames, flames, flames. The boys made a few inventive substitutions -- a puppy dog stands in for a monkey, a boat for a plane. But even more impressive are the things they don't substitute -- a submarine, a truck on fire, a melting face, the same copy of a 1936 Life magazine used in the original. This is not "cute" or "impressive considering their age" -- it is a genuine virtuoso work.

The film is a crowd-pleaser, turning all the Raiders action -- clichéd after 20 years of imitation -- into a new and genuinely startling viewing experience. How will they do this next scene? How can they pull that stunt off? And don't forget that these kids are literally growing up in front of the camera. Voices deepen, hairstyles change, and though writers abuse this phrase: It's like nothing you've seen before. The hero grows stubble, and the heroine grows breasts.

Ten-year-old Chris Strompolos came up with the idea first: a real, live remake starring whom else? Chris Strompolos. He told his friend Eric Zala, one year older and a bit more studious, as they rode the bus to school.

"Little did I know that casual comment would change my life," Zala says.

Zala had been learning about video production in a class, and his outward shyness masked a fierce artistry and perfectionism. In the duo's first meeting, Zala sketched out each character's costume. Over one summer, he storyboarded all 602 scenes in the film. Their buddy Jayson Lamb -- a fan of horror films, magic tricks, and special-effects guru Rick Baker -- made a perfect addition to the team.

On the phone from Oakland, Lamb remembers, "They said, 'Jayson, you're mature. You hold the camera.'"

Such derring-do may ring a bell for other twenty- and thirtysomething movie fans, who can perhaps remember tromping across presprawl suburbia with 16 mms and clunky, first-generation VHS cameras in hand. In those days, real movies were made in Hollywood, mister, and only kids and rebels had the ingenuity (or naiveté) to make their own. For the three boys, rich with imagination and summer days, a basement became a sound stage, a dirt mound the Sahara Desert. In the boggy and unsupervised backwoods of southern Mississippi, all things were possible.

They have a thousand stories of misadventure and chaos. The time they built a fake boulder in Strompolos' room only to discover it wouldn't fit through the door. Or the time they needed a tracking shot, and they threw Lamb and the camera in a shopping cart. Or when they dragged Strompolos from a truck or when Zala's face got stuck in a plaster mask and he lost an eyebrow. "It grew back," he says assuringly.

The obvious question is, "What did your parents think of all this?"

"They were very supportive," says Zala. "Particularly when we almost burned down the house."

Oh yes, that time. It was for the scene at Marion's bar, a squabble that explodes in flame. The script called for one unfortunate "ratty Nepalese" to catch fire. They doused Zala with gasoline and got the shot -- it's a doozy, by the way -- but when a crew member went to smother out the flame, he accidentally fanned it higher, creating a small conflagration and singeing Zala's hair before Lamb pulled the key on the fire extinguisher.

Sometimes, the stories sound less like Raiders of the Lost Ark and more like Lord of the Flies. But the film is an amazing testament to their endurance. For a kid, a year of anything can seem like a death sentence. This took seven. How did they finish?

"One word," says Lamb. "Mississippi. There's nothing to do."

But that's only part of it.

"From the moment we came up with the idea," Strompolos says, "everybody doubted us. But if you are focused enough, and you have conviction, eventually people turn their heads. People say, 'Wow, these kids aren't going to stop.'"

Fifteen years after filming ended, Alamo owner Tim League discovered the movie through L.A.-based director and fellow tape-swapper Eli Roth. Roth is not friends with the filmmakers, only a fan. So when Roth had a meeting at DreamWorks -- run by Steven Spielberg -- he slipped a copy to an executive. A few days later, Roth got a call. Spielberg loved it, and he wanted to tell the guys himself.

That's how Eric Zala wound up with a framed letter from Steven Spielberg on his wall. Jayson Lamb and Chris Strompolos got one, too. It felt like the fitting finale, the long-overdue final chapter in a saga that had sculpted their young lives. "Ten years after finishing it," Zala says, "I would still dream about it. For the longest time, the central question of my life wasn't 'What's the meaning of life?' or 'What am I going to do when I grow up?' It was, 'Are we ever going to finish this?'"

And they did. Of course, there's always the sequel.

The world premiere of Raiders of the Lost Ark: The Adaptation (1982-1988) screens this weekend at the Alamo Drafthouse Downtown (409 Colorado). All three filmmakers will be in attendance. See "Film Listings" for showtimes. For more info and to purchase tickets, see www.drafthouse.com.