Tim League says "blow me!" with his brand-new, German-imported, inflatable screen; plus, The Sixth Sense's Haley Joel Osment may soon be seen on Austin street corners, muttering "I see Texans." 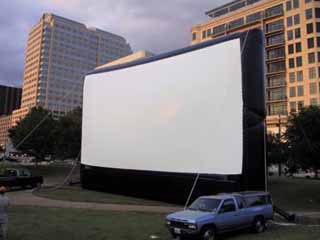 Alamo's Tim League to Rolling Roadshow Critics: Blow Me! Dept.: Get your mind out of the gutter, pal! We are, of course, referring to the Alamo's newest super-happy-funtime-toy, a gigantic, 25-by-50-foot, German-engineered inflatable movie screen, which is replacing the old Rolling Roadshow outdoor scaffolding screen and will debut at the Alamo's screening of The Big Lebowski at Showplace Lanes on Tuesday, July 30. Citing bad backs and the terrifying way the original outdoor screen tended to sway in a strong wind as the reason the switch was made (with said swaying particularly noticeable during this past spring's Republic Square Park screening of Rebel Without a Cause), Tim League procured the new screen from no less an expert in inflatable playthings than the reunified Germany, where film exhibition and hot air so often go hand in hand with big rubber things and guys named Dieter. "This screen is absolutely perfect," enthuses League. "It basically looks like a giant balloon-bounce Magic Castle thingee, and it inflates in less than 10 minutes." Key to the new screen's appeal is the fact that there's "really no liability if all turns to hell and a tornado comes through during a screening. You'd just be hit on the head with a giant balloon!" Let it never be said you don't get your money's worth from Mr. League, now a world leader in inflatable filmic fun. Check out www.drafthouse.com and www.rollingroadshow.com for more info... Progress continues to chug along on Secondhand Lions, the upcoming film from local writer/director Tim McCanlies (Dancer, Texas Pop. 81). Robert Duvall, Haley Joel Osment, and Michael Caine -- who most recently cut his Texas teeth while shooting Miss Congeniality -- have all signed on for the coming-of-age-drama, the flagship feature for New Line's new family division. Lions will be shot in and around Austin, and late September is being penciled in as a start date for cameras to roll... The Cinematexas International Short Film + Video Festival is holding an Independent Cinema Day benefit Thursday, July 4, 10pm, at Club DeVille (900 Red River). The event will include music from the Tuna Helpers, Cue, and Octopus Project, as well as more avant-garde and rare films than you can shake your Dada at. Call 457-0900 for more info or check out www.cinematexas.org... Attention Master Thespians: Casting director Gary Chason will be returning to Austin with a pair of his acting workshops at Alleywood Studios (1902 S. Congress) during the month of July. "Camera Technique," Saturday, July 13, 10am-6pm, will "demystify the mechanical aspects of screen acting," and "TV Commercial Technique," Saturday, July 27, 10am-6pm, will focus on the "tricks of nailing the audition." Each workshop is $85, or $150 for both, and enrollment is, as always, limited. Call 416-0389 or e-mail gchason@prodigy.net for more information... Varmint Poaching the Acme Way, Vol. 1: Even though it's not affiliated with the Cinemaker Co-op, Shannon Owens and Andre Silva's upcoming Super-8 Animation Workshop on Saturday, July 13, 10am-6pm (location TBA), will likely result in yet another off-year for animated mammals of all stripes and result in the loss of countless primary-colored Steinway baby grands over monochromatic canyon walls. That said, the Owens/Silva workshop will focus on a variety of styles of animation and allow participants to create their own animated short over the course of the day. Registration is limited and due by Friday, July 5, with a payment of $100 due by Wednesday, July 10. Call 326-4373 or e-mail Owens at sowens@kmfa.org.