Del Toro Gets Serious About the Funny Papers 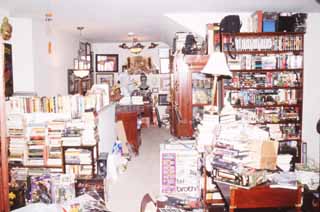 If anything matches Guillermo del Toro’s passion for film, it may be his passion for comics. The director is a lifelong fan, dating back to before he could read. When he was young and lived with his grandmother for long periods, she would buy him and his brother “10, 15 comics every weekend.” He started with superheroes, Tom and Jerry, Little Lulu, and bootleg Mexican versions of EC Comics – “they were called something different and were slapped together with a sepia ink on brown paper, so they were three times as creepy!” – then graduated to DC’s Seventies superhero/horror fare, such as Swamp Thing and The Demon, books he considers influential in his artistic development. He remains a fan today, chiefly of Mike Mignola’s supernatural adventure series Hellboy, which del Toro has been laboring for years to realize on film. With his involvement in that project, Blade 2 (which is based on a comics character), and his attachment to another comic book film, The Coffin, discussing del Toro’s affection for the medium seemed especially timely. – Robert Faires

Austin Chronicle: Are there particular comics that grabbed you as a kid?

Guillermo del Toro: One of the first comics that I loved – and to this day I love it as a great storytelling environment for a character – was Little Lulu Comics. I thought they were masterfully told. I used to love with a passion Carl Barks’ Donald Duck Adventures. I never liked the other Disney artists, but Carl Barks had a personality, and to this day I consider him one of the greatest comic book storytellers of all time. His influence can be felt as deep and as wide as Raiders of the Lost Ark, which I consider one of the best Carl Barks adventures ever told.

AC: There was a real sense of adventure in those books.

GDT: There was, and he was one of the most thoroughly documented, visually referenced comic book artists working in the “funny animal” category. When he showed you a Spanish hacienda or a Spanish suit of the 1700s, he would document every little piece that went into it. He was really careful, so what you got through what he termed “his pile of National Geographics” was a real sense of geography and place. It didn’t feel fake. The trip of those little ducks to that place, to live that adventure, felt real.

AC: What is it about those boxes on the page that you find so compelling?

GDT: Well, what they have – and it’s something that films don’t have – is they can choose which of the frames is most representative and dramatic to portray emotion for a moment, and they freeze it in a way that underlines its importance. Whereas in film you have to do really good framings, but they are transitory, both in flow and in montage. In Blade 2, I have tried, and sometimes achieved [the effect that] if you freeze frame the movie, you will get a perfect comic book panel.

AC: Did comics affect your sense of composition once you got into film?

GDT: Yes and no. Berni Wrightson, who was one of the most influential artists in my life, definitely affected my composition. Will Eisner. The Spirit not only affected my composition but changed my life. I can tell you exactly which number of The Spirit I read first, where I was at that time, what was happening, from where to where we were traveling. It is impossible to recapture that moment when you go, “Oh my god, this is a thing of art! This is as great as anything hanging in the Louvre.”

Comic books have one thing that is prodigious: Unlike movies, where there is a director who essentially orchestrates the talents of hundreds of people into something that to varying degrees resembles his imagination, in the comics you have a single voice telling the story, no matter who wrote it. One single voice tells the story and that is the artist. When that happens, comic books have a way of creating as personal and unique an environment as film, if not better. You can recognize a David Lynch movie in a nanosecond if you land on the right frame. If you land in the wrong scene, it might take you five, six, 10 seconds of film. You open a book, you instantly know if Berni Wrightson is there, if Richard Corben is there, because their universe is so palpably their own. They are the masters of that domain. So that purity, that integrity, and that capacity to distill an essence of a person, is far greater in a comic than in a movie.

AC: When you approach doing a movie that has a comic as its source, like Blade 2 or Hellboy, are you trying to evoke some of that distinctive universe?

GDT: Absolutely. But look, it’s different with Blade and Hellboy. Blade was drawn by Gene Colan and written by Marv Wolfman. Although I appreciate them as craftsmen, I do not admire them as artists. Mike Mignola is one of the people I admire the most as an artist and in my life. I’m 38 years old and to this day when I see a Hellboy comic, I feel the exact same pang in my heart that I felt as a kid opening any comic book of a hero of mine. I mean, I’m a drooling geek about Mignola’s art. When I do Hellboy, which hopefully will be next, I will not try to evoke, I will try to absolutely 100% capture on film what Hellboy is on the page – 100%, like without any doubt, without any margin of error. I want to make the best goddamn movie ever made out of a comic book.