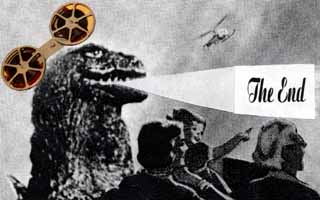 There's not a whole lot to recommend East Prairie, Missouri. Situated in the southeast corner of the state (in proximity to Charleston and Sikeston), there are a few stoplights, the usual assortment of chain restaurants, and four or five thousand Midwesterners. That part of Missouri isn't really even close to anything, being a several hours' drive from Memphis, Kansas City, Springfield, Jefferson City, and St. Louis. Still, in the confines of East Prairie stood a rickety warehouse containing a cache of films from the tail-end of the drive-in era: 976-Evil; the Linda Blair revenge opus Savage Streets; Euro-horror like Lamberto Bava's Demons; dimwit sex comedies like Can I Do It Until I Need Glasses? For years the movies languished, forgotten and decaying ... until recently.

Collecting prints of films, for those who have the means, is not unlike collecting baseball cards, Hummel figures, or Franklin Mint plates. There's a community of traders and collectors, and it's something that easily progresses from a hobby to an avocation to an obsession, until the collector is overrun with film cans. Like Alamo Drafthouse owner Tim League.

League has spent considerable time on the inside track of the collector's world, driven partly by business necessity and partly by a love of the game. Some time earlier, he made the acquaintance of Harry Cuero of New Jersey's Exhumed Films. ("It's sort of a double meaning," notes League, "because they're film collectors, but they deal almost strictly in horror and exploitation stuff.")

Initially, League was tipped off to the drive-in prints by his pal Cuero. The East Prairie warehouse had previously been a depot for Clark Films, a long-defunct distributor of movies for the drive-ins of the South and Midwest. Clark was later absorbed by Dimension (which in turn became a Miramax subsidiary), but the East Prairie warehouse was apparently forgotten in the transition.

The decrepit warehouse was bought by an East Prairie businessman, an all-around pillar of the community (we'll call him the King of East Prairie), who viewed its contents as little more than junk cluttering up the place. Harry Cuero, in turn, caught wind of the King's desire to liquidate the films and traveled to Missouri to bring back what he hoped would be a cache of prints. Cuero's hopes were dashed, though, once he got to the Missouri warehouse. Many prints were water damaged from sitting under a leaky roof. Others were "vinegarized," the result of a chemical reaction that occurs when the film is exposed to fluctuations in temperature and humidity. Still others were hopelessly battered and spliced from being run through too many projectors and handled carelessly.

"Harry went down there and wound up writing off about $1,500 in travel expenses and said, 'No, I'm not gonna do it because the price is too highí'" League recalls. "Harry got in a big screaming match with the old guy and severed all of his ties on the deal. The guy wasn't in a mood to dicker and wasn't any too diplomatic about it."

Eventually, League made the trip to Missouri himself, by which time, the old man had at least picked up the prints and moved them into an abandoned movie theatre with a solid roof, heading off any further water damage. Wisely leaving out Cuero's name, League struck a deal with the irascible King of East Prairie, who had apparently grown sick of looking at the stuff. "By that time, a year and a half had gone by, and they were still just sitting there," League says. "He agreed on the price, and there were really no hitches once I got there, and I loaded it all out in one day. It was just something that was taking up space in a building that he could be renting out." League filled a Ryder truck from floor to ceiling, front to back, with the film cans and drove the overloaded truck back to Austin, not daring to exceed 50 mph the whole way.

Once safely back in Austin, League took on the daunting task of figuring out what prints were there (and which ones were salvageable). Contrary to what his pal Cuero thought, many films inside rusted, filthy cans turned out to be in pristine condition. On the other hand, some spotless cans contained reels that looked more like Bundt cakes than film; they were ruined beyond hope. About 40 of the prints were so wrecked by water, dirt, or vinegarization that they had to be scrapped. Many of those wound up in the hands of Film Action's Luke Savisky, who plans to use fragments of them for an installation to eventually be shown at the Alamo.

After all the work, though, the haul yielded a considerable archive of drive-in, exploitation, and horror junk -- some obscure, some better known. Among the titles are some that will set the trash moviehound's mind ablaze ...