Top of His Craft 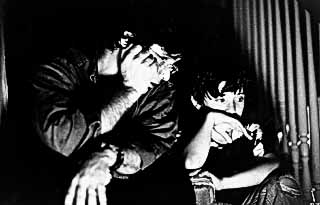 "There's more of me and my family in Searching for Bobby Fischer," says Steven Zaillian, shown here with the film's star Max Pomeranc. "It's a much more personal movie." The writer and director will be at a screening of the 1993 movie this Saturday as part of the Austin Film Festival.

Instead, Zaillian is a self-taught scribe who learned his chops on the job, beginning in 1984 with his adaptation of Robert Lindsay's political drama The Falcon and the Snowman, probably best remembered for the performances of its young stars, Timothy Hutton and Sean Penn. Zaillian was a thirtysomething film editor writing on the side when director John Schlesinger tapped him for the project after reading one of the writer's original (and still unproduced) scripts. "I was a nobody," Zaillian remembers. "They really took a chance."

But Zaillian ran with it -- turning one successful screenplay into another (Jack the Bear not withstanding), and now his name rests atop a healthy filmography that befits the man described in a New York Times profile by Walt Disney Studios chairman Joe Roth as "one of the two or three best screenwriters in town." He penned the scripts for Schindler's List (for which he won the Academy Award), Awakenings, Clear and Present Danger, as well as his two turns as director -- Searching for Bobby Fischer and A Civil Action. Throughout, Zaillian has dodged Hollywood's notorious pigeon hole, allowing him to take on projects as varied and interesting as his two forthcoming scripts -- Hannibal, the slithery and controversial sequel to Silence of the Lambs, and Scorsese's historical epic The Gangs of New York. But Zaillian, who is as unpretentious as he is successful, insists he keeps his distance from the Hollywood games. "I don't know about leverage," he says. "I'm never aware of how my work affects the next job. I can never quite figure it out. I just sort of go back to work."

We spoke to the screenwriter from his home in L.A., where he was preparing for his first trip to Austin to attend the Austin Film Festival and Heart of Film Screenwriters Conference, which will screen the film Zaillian says he is most proud of -- his directing debut, Searching for Bobby Fischer, an affecting father-son drama about a seven-year-old chess wiz.

On His First Film

"[Working on The Falcon and the Snowman] was probably the most exciting thing in the world. Probably nothing has been that exciting since, honestly. I was certainly intimidated when I started writing it and terrified that it was going to be terrible and that I'd get fired. And then I was very intimidated when I first met [director John Schlesinger] because he was so famous. I thought every experience would be a good one, because my first one was so good, and you gradually find out that that's not the case. You have some good ones and some bad ones, and you try to learn from the bad ones and really, really try to enjoy the good ones as much as you can, 'cause they don't happen all the time."

"It was a project that had been around for a long time, and I don't think anybody had any great hopes that it would ever be made. So giving it to me was not like a big coup. It was a project that had had a lot of trouble. But the pressure I felt was not blowing it. Just doing a halfway decent job with it. Once I got through the first draft of it and started talking to some of the survivors (two in particular who live here in L.A.), and I knew they were going to make the movie, I started to get a sense of it being more important, so I tried to be very careful with it from that point on.

"It was really a way to tell the story of the Holocaust in a way that you could watch it. Oskar Schindler was the excuse to tell the story, and so the rule that I had for myself, right from the beginning, was: I will not show anything that he is not involved with in some way. And as much as we can show through him, that's what we'll do. I figured it would be containable that way. Because if you really start thinking about it, there's so much to tell that you get overwhelmed. It's too big of a subject to make a story about, really. There's a thousand other stories that we didn't tell.

"After Schindler's List, it was kind of hard to go back to work. You don't want to do something that's not up to a certain standard, and you end up doing nothing. And I think that happens to a lot of people, and I had to remind myself that Schindler's List was not meant to be anything other than another movie when we started."

On Winning an Oscar

"You're really happy about it, but you also have to go up and you don't want to trip and say something stupid. So it's a kind of mixture of feelings. But it was a good year, no denying it. You sort of say to yourself, 'Well, that's never going to happen again.' So in that regard, it's like I always look at the dark side. I try to remind myself to enjoy everything because it's not going to happen again."

On Why He Writes Adaptations

"I know they're gonna get made. I don't like to work on stuff that doesn't get made. It's depressing. And normally speaking, if somebody has bought a book, they have an idea of how it's going to turn out and they spent some money already, so the chances of it being made are much greater. The idea of working "on spec," as they say, scares me to death, because I'm my harshest critic, and I think I'll throw in the towel long before the script is done, unless I've already been paid for it and I have to do it. I'm afraid I'll just give up. It's sort of a cowardice, I think. If there's a strike, which everyone is talking about, I'll be writing an original screenplay of my own, as will the rest of the Writers Guild.

"I find it's most interesting to me when it's not a storybook, you know? It's not a novel that has a very clear story. Like Awakenings was based on case studies. A Civil Action was based on a very exhaustive book. And Searching for Bobby Fischer was based on a series of essays, so it lets me contribute something too. A lot of times I'll look at it more as if somebody's done an awful lot of research for me."

"When you're writing, you can take a break, and there's not 150 people standing around. When you're directing, it really is a runaway train and you just try to stay on and you have to make so many decisions so quickly. I don't know how another director who doesn't write the material has the confidence to give the answer to the hundred questions that come up every day. What I don't have is as much experience as they have doing the job."

"If you talk to five different writers or five different directors, their stories are going to be different. When I had written three scripts and nothing had happened with them, I got really discouraged. And then one day, the phone rang out of the blue. Something can happen when you least expect it. I don't think it matters anymore [where you live]. I think the trick is always getting the right person to read your script." Searching for Bobby Fischer screens Saturday, October 14, 9:15pm, at the Paramount. Writer/director Steven Zaillian will be in attendance to introduce the film and conduct a Q&A afterward. For more information call 800/310-FEST or www.austinfilmfestival.com