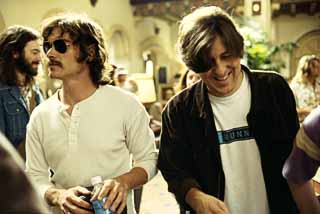 "You made friends with them because they make you feel cool. And hey, I met you. You are not cool."

Before Cameron Crowe was a filmmaker, he was a fan. Before he was a journalist, or a screenwriter, or an Academy Award-nominated director, he was just another San Diego kid, devouring rock records in his bedroom and hoping to be cool one day. Cameron Crowe knows what it means to admire something bone-deep, and while Almost Famous, the writer/director's follow-up to Jerry Maguire, is about coming of age, first love, and family, it is also about how the artists who inspire us need our inspiration too. And as such, it is one of the sweetest depictions of fandom you are likely to see.

Set during "the circus of rock in 1973," Almost Famous re-creates a pivotal summer in Crowe's life, when the fledgling writer, here called William Miller, met legendary music critic Lester Bangs and was given his first assignment for Rolling Stone at the age of 15. Played by character actor extraordinaire Philip Seymour Hoffman, the late, great Bangs was Crowe's real-life mentor, and his is the raging voice of rock criticism at its most uncompromising. "You build your reputation by being honest and unmerciful," he warns. "Don't make friends with the rock stars." William, of course, ignores him. He buddies up with the band (the fictionalized Stillwater), falls for the groupies, and when he isn't soothing the fears of his wise, protective mother (Frances McDormand) or his magazine editors, he is sorting out how the hell to please both Bangs and the musicians who know what he writes can make them rock gods. Crowe calls Almost Famous a "love letter to music," but it is, in some ways, a love letter to fans. Which is nice -- because as it turns out, I am a fan of Cameron Crowe.

"Looking on, she sings the songs.

The words she knows, the tunes she hums."

Crowe's alter ego, William Miller, is no different. "My goal was to grow up with the characters I write about," the director explains, warm and approachable and in no way disillusioning at said press junket. "It just takes me so long to make movies that I always end up older than the characters." Played by newcomer Patrick Fugit (pronounced Fyoogit), a dimpled, ruddy-faced natural who admits he once thought Led Zeppelin was a guy, William is the heart and soul of the film. It is through his eyes that we meet this world of Seventies rock, feel the quickening pulse of being backstage, of interviewing idols, of watching history unfold. Almost Famous took Crowe three years to make, and encompassed so many of the author's own experiences that he had difficulty coming up with any title for it at all. The film floated around for years as Untitled Cameron Crowe Project, Stillwater, and The Uncool before the director settled on Almost Famous -- the name of the emerging band's tour as well as a reference to the kind of secondhand celebrity enjoyed by the groupies and writers at the movie's center.

Like William, Cameron Crowe is an observer -- a gentle and inquisitive person, able to divine a person's spirit from the words he chooses, or the ones he doesn't, or the way he holds his hand against his chin. "Serving the god of detail," Crowe calls it, and it is what makes him a natural storyteller and elevates his films -- simple love stories, all -- from the heap of Hollywood cliché. "He has such a way of hooking you into every single character in the movie," Fugit says. "And by the time it ends you're like, 'No, I want it to keep going.'"

"He has this amazing way of sharing with an audience moments fired and fueled by love -- some nonverbal moments, some very verbal moments," says Kate Hudson, famously the daughter of Goldie Hawn and, perhaps not so famously, the girlfriend of the Black Crowes' Chris Robinson. Although she was originally cast in the role of William's rebellious sister Anita, Hudson's turn as Penny Lane, luminous party girl and "band aid," is one of the film's loveliest surprises. 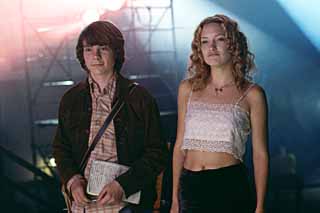 "Kate is one of those actresses where you just leave the camera on her and all that stuff can pass across her face -- laughter and sorrow," explains Crowe. "I feel like I keep writing these women characters that are sort of for Shirley MacLaine or Audrey Hepburn, you know? So we end up finding someone who understands those qualities, and Renée Zellweger was one and Kate is one."

Indeed, Hudson's performance boasts a light, breezy confidence and a playful quality far removed from her previous appearances in a forgettable string of cinematic blah (Gossip, Desert Blue). "I couldn't ask for a better person to have my coming-out party with than Cameron Crowe," she says.

Like Mike Leigh, Paul Thomas Anderson, and Woody Allen, Crowe is an actors' director, whose work attracts consistently high-caliber ensembles. In addition to Fugit, Hudson, and Hoffman, Almost Famous features supporting performances from Frances McDormand, Jason Lee, Anna Paquin, Fairuza Balk, Shine's Noah Taylor, and Billy Crudup (pronounced Croodip), who plays guitar prodigy Russell Hammond, a role Brad Pitt was cast in and later withdrew from. With his tissue-thin, thrift-store shirt and snarky good humor, Crudup seems more likely to deliver your next pizza than become Hollywood's Next Leading Man, but that's the title Esquire gave him in last month's cover story on the talented star of several films you've probably never seen (Jesus' Son, Without Limits, Waking the Dead). Unlike the kind of tongue-in-cheek self-mockery Brad Pitt might have engaged in, though, Crudup's rock star is a complicated, believable, and downright sympathetic character. "In most pop culture, we've seen musicians portrayed as silly, arrogant spoofs," Crudup explains. "So to see somebody who's just a regular guy under extraordinary circumstances is, in some ways, a subversive thing."

Crowe's tender depiction of the much-maligned Seventies could be considered subversive, too. These days, it isn't so popular to be a fan of that era's hard-rocking musical icons or to try telling fresh stories about them (Crowe says if he was going to base the band on anyone, it would be Lynyrd Skynyrd, whose late lead singer Ronnie Van Zant he calls "a very honorable guy"). We're too jaded by the clichés -- the booze binges, the roar of the stadium, the inevitable rifts -- to treat their stories as anything more than cautionary tales, like VH1's Behind the Music, a series Crowe says "turns everybody into Spinal Tap." But Cameron Crowe delights in giving new life to the worst stereotypes (high school students, sports agents, single mothers), and his characters have always championed romance in the most cynical of places. Think of the couples in Singles, searching for love and sincerity in the grunge-fueled age of irony. Think of Jerry Maguire, trying to re-ignite sports agents' love of the game. Almost Famous longs for the day when the youth of America believed that rock & roll could save the world -- and you get the feeling that Cameron Crowe still does.

"Making this film personal was the key to finishing it," he says. "And I hope all the stories mesh. It's about how music changed all of us. Because it did."

Cameron Crowe is not rock star cool -- that being a kind of cheap, store-bought coolness that requires sunglasses and fur coats and fades as quickly as pop radio. But like musicians who really are cool, Cameron Crowe is an original, whose work inspires, and who doesn't give a damn about what's cool or not. The director is about to leave the table of writers when he stops himself. "Wait, who here writes for The Aztec?" he asks, referring to the University of San Diego's college press.

The young woman sitting beside me raises her hand timidly.

"All right!" He clasps his hands together in a cheer.

"Did you write for The Aztec?" someone asks him.

Perhaps emboldened by the exchange, the young woman holds out a notepad. "Mr. Crowe, will you sign this?"

"Sure." His voice spikes when he says it. Out of the corner of my eye I can see him scribbling the note. It reads: