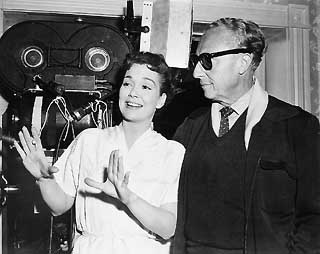 People: You can't live with them, and you can't live without them. In a nutshell, that might sum up the subversive dialectics of Douglas Sirk's films. Who is Douglas Sirk, and why is the Austin Film Society's latest series devoted to showcasing seven of his Fifties' melodramas? It is not enough to say that Sirk was Hollywood's most successful director of melodramas, a type of filmmaking also known as "women's pictures" or "weepies." Nor is it sufficient to say that he was a film virtuoso whose artistry was overlooked in his own time. Sirk was a unique film stylist, whose impeccably directed movies used the often ludicrous structure of the bourgeois melodrama to offer biting critiques of American society. A great fan of Sirk's work, German director Rainer Werner Fassbinder enthusiastically acknowledged his predecessor's influence on his work. "Douglas Sirk's films liberate your head," said the director of such modern melodramas as Fox and His Friends and The Marriage of Maria Braun.

Born in 1900 of Danish heritage in Germany, Detlef Sierck (as he was then known) worked as a stage and film director in his homeland until he received a timely offer to come to Hollywood in 1939. In Germany, in the Twenties, Sirk directed plays by Molière, Strindberg, Ibsen, Schnitzler, Sophocles, and Brecht & Weill (his Bremen production of The Threepenny Opera was considered definitive by the authors). During the Thirties, Sirk successfully alternated stage and film work and developed a narrative style based more on Expressionist externalizations of mood rather than realist interpretations of truth. The acting, sets, decor, and lighting all became reflections of his characters' inner mental states -- a quality Sirk put to good use when directing the movie melodramas that became his forte. 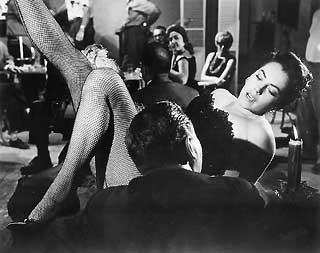 During his early years in Hollywood, Sirk directed standard programmers like Hitler's Madmen (1942), Mystery Submarine (1950), Weekend With Father (1951), Has Anybody Seen My Gal? (1951), and Shockproof (1948), a film noir penned by Samuel Fuller. There were also his early melodramas: Summer Storm (1944), which was adapted from a Chekhov story; Lured (1946), with Lucille Ball and George Sanders; and Sleep, My Love (1947), starring Claudette Colbert as a woman driven mad by her husband. Signed by Universal to a long-term contract in 1950, Sirk made his first unqualified masterpiece, All I Desire, in 1953. The film stars Barbara Stanwyck as an actress who returns to the small town and family she once deserted. In it we can see many of the themes, conflicts, and visual techniques that find full flourish in Sirk's later melodramas. Dichotomies and their consequences on the individual and society are all present here -- the conflict between a woman's desires and culture's expectations, the divided self, and the materialization of emotions through the use of props, windows, screens, and staging.

Sirk's melodramas found full bloom in the Fifties, beginning with Magnificent Obsession in 1954. His final film, Imitation of Life, was released in 1959 and was Universal's biggest box-office success. Sirk then retired to Switzerland, where he played host to young acolytes like Fassbinder, but never made another film. Sirk died 30 years later in 1989.

"This, anyhow, is what enchants me about Sirk: this delirious mixture of medieval and modern, sentimentality and subtlety, tame compositions and frenzied CinemaScope," wrote Jean-Luc Godard in a review of Sirk's 1958 film, A Time to Love and a Time to Die. It may help to explain the success of Sirk's films, his manipulation of the classical format of the melodrama for ironic rather than conventional ends.

Whereas most melodramas are designed to support the social status quo, Sirk's films are subversive in that they reveal the social system as dehumanizing and perverse. Partly, it is the melodramas' implicit acceptance of the bourgeois social order that makes them seem so quaint and amusing to our modern ears. They always hold out for a return to a "Hi, honey, I'm home" normalcy and the characters' discoveries of the errors of their ways. Not so with Sirk.

Although Sirk often used the popular fictions of writers like Fannie Hurst as his scenarios, the way he told his stories instead exonerates his characters while indicting the society. Here, his Brechtian stage influence came in handy as he was able to present characters with all their passions, feelings, and problems, and then juxtapose the characters' needs in narrative cross-currents so that identification with any one character becomes impossible. The effect encourages analysis rather than emotional surrender.

But the real thing that sets Sirk's melodramas apart are his images. He uses settings, color, lighting, and shadows to express the inner emotionality of his characters and to provide ironic commentary on events. Mirrors and windows are a recurring motif throughout his work, but in Sirk's world, mirrors do not cast the usual reflection. "What is interesting about a mirror," says Sirk, "is that it does not show yourself as you are, it shows you your own opposite." Again, this is Sirk casting a subversive spin on a sentimental device. Few Sirkian images are as haunting as Jane Wyman's stark reflection in the new TV that her children have given her to ease the loneliness of her widowhood in All That Heaven Allows. Or the multi-edged translucent beads that rain down during the opening credits of Imitation of Life.

Sirk would also use objects brazenly to drive home his points. Dorothy Malone clutching the phallic desktop oil derrick at the end of Written on the Wind when she's inherited an empire but lost the man she desires is an irrepressible image. (This comes, of course, after she, quite literally, kills her father with her wild mambo dancing.)

The resolutions of Sirk's films have also become the object of much discussion. Sirk recoiled at the studio's insistence on happy endings, finding them unrealistic conclusions to the conflicts that preceded them. Thus, Sirk's films are filled with some of the unhappiest happy endings ever recorded on film. Technically, life goes on and the assumption is that everyone lives happily ever after, but any thoughtful observation of the story's dynamics will alert the viewer to the unlikeliness of that ever occurring. The conclusion to Sirk's final film, Imitation of Life, provides the best example. It's a grand funeral procession, New Orleans-style, and all the principals are tearfully reunited as they drive off in a hearse into the future. There is the illusion of a family reunion, but we know in our hearts that these people can never resolve their conflicts. That the movie satisfied the demands of the formula, subverted conventional meanings, and was a box-office and critical sensation (two of its actresses were nominated for Oscars), says more about the filmmaking of Douglas Sirk than words can convey. Perhaps Sirk knew that it was a fitting moment for retirement.

Douglas Sirk, Magnificent Obsession, The Tarnished Angels, There's Always Tomorrow, Written on the Wind, All That Heaven Allows, A Time to Love and a Time to Die, Imitation of Life, Austin Film Society