You might expect a certain kind of movie from filmmaker Carlos Avila. After all, he grew up in East L.A., the veritable Mexican-American/Chicano homeland -- if you believe the few high-profile Hollywood films about the contemporary Mexican-American experience (Bound by Honor, American Me, Mi Familia). Then there's his production company, Echo Park Filmworks, named for his East L.A. neighborhood, or his comfortable slip into unguarded familiarity ("All right, homegirl ..."). Still, Avila is not content to solely trade on his East L.A. roots. Instead, he's managed to produce work expanding the focus of the Mexican-American experience. His 1993 American Playhouse drama La Carpa showcased the Mexican theatre tent shows of the 1930s, and his critically acclaimed 1997 television series for PBS, Foto-Novelas, presented four 30-minute episodes which took as many cues from Mexican pulp novels and telenovelas as from classic U.S. television. On Friday, March 31, Avila's first feature film, Price of Glory, opens nationwide, and once again, he manages more than a Mexican-American story rooted in struggles over oppression or basted with overt social commentary.

"There's an idea that only social activist dramas are our genre,'" Avila said, in Austin for the premiere of his film during SXSW Film. "But there are other stories to tell."

In Price of Glory, Jimmy Smits (NYPD Blue, Mi Familia) stars as Arturo Ortega, a former boxer whose chance for a championship title was cut short early in his career. His story picks up in Arizona with Arturo as a family man with three young sons. He coaches his boys for Pee Wee boxing tournaments with paternal care, cleaved with the angry sting of his unrealized career. Avila describes Arturo as a bundle of paradoxes: pragmatic and reckless; a warm and caring parent who can also be very cruel and exacting.

"You always see Mexican-American fathers as stone-fisted patriarchs," Avila explained. "I wanted to show something else. I wanted to break the stereotype."

In visual and aural terms, Avila's Price of Glory has tipped over the iconography cart and redesigned the sound palette of "the Mexican-American film." In other words, don't look for a mural in Price of Glory, or wait for the happy blare of mariachi trumpets. Since "so many films are set in East L.A. already," Avila was happy to set his film outside California in Arizona -- a choice the vast number of Mexican-Americans across the nation are sure to notice. Rock en Español courses throughout the film.

"Virtually every boxing movie is, finally, about something else," according to film critic Terrence Rafferty. As a boxing movie, Price of Glory is no exception. Like many others of its genre, it is an American Dream story -- a story of poor, disenfranchised boys hoping to work their way out of poverty through the ring. The film has all the familiar boxing film motifs: the gym scenes leading up to the "big event"; the physical and mental battles in the ring; the pull of desires outside the ring; and, of course, the fights themselves. Price of Glory is played out against the story of Arturo's relationship with each of his sons, their yearning to please him, and their eventual drive to form their own identities as young men.

The film is based on an unproduced play by award-winning sportswriter, novelist, and nonfiction writer Phil Berger. Berger covered boxing for The New York Times from 1985 to 1992 (the Tyson years) and collaborated with Joe Frazier and Larry Holmes on their autobiographies. Covering boxing for print media introduced Berger to everyone from the managers and trainers to the lawyers and gym rats. His insider experience and Avila's experience with Mexican-American culture came together when the two met at the Sundance Institute Filmmaker's Lab. There, Avila learned of Berger's play, and the two began a five-year collaboration to develop the screenplay (although Berger is given full writing credit). During their work, Berger introduced Avila to the boxing world. Avila went to press conferences, talked to managers and trainers, met fighters, and even accompanied Berger to Las Vegas to watch a bout between Oscar de la Hoya and Jorge Paez.

While Avila was immersed in the behind-the-scenes boxing world, Jimmy Smits observed the fans. He reportedly went to many Silver Gloves amateur fights in Los Angeles to observe father-son relationships and "was amazed to see that the whole family would come," as he expressed in a recent interview in Parade magazine. But learning the culture is one thing, and learning the trade itself is quite another. Therefore, Benny "The Jet" Urquidez was brought in to train the actors in all aspects of the sport. Three weeks of intensive training occurred prior to shooting, with daily workouts for four hours each day once the film was in full production.

Cast as Arturo's adult sons are Jon Seda (Selena), Clifton Collins Jr. (Dead Presidents), and newcomer Ernesto Hernandez. Seda came to the film with real-world experience as a boxer, having competed in the Golden Gloves and won more than 20 fights, including five in the 1990 New Jersey Golden Gloves Competition. 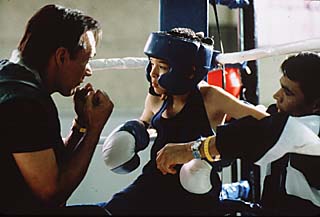 "You always see Mexican-American fathers as stone-fisted patriarchs," says Avila about Jimmy Smits' character in Price of Glory. "I wanted to break the stereotype."

There are many surprising performances in Price of Glory, particularly from Hernandez and the three boys cast as Sonny, Jimmy, and Johnny as children (Ulysses Cuadra, Mario Esquivel, Gilbert Leal). All were found at open casting calls held on both coasts last year. Often, the open casting call is a way to generate buzz for a movie, perhaps awarding a walk-on or a cameo to a lucky "winner." Not so for Avila.

"I believe in open casting calls. I'll definitely do it again."

Avila also took a chance on comedian Paul Rodriguez, who gives an eye-opening (and nonhumorous) performance as Pepe, a small but pivotal role.

"I was so glad when we got him on," Avila said. "And so glad we could capture this other side of him. You don't expect this kind of work from him, and I think audiences will be surprised."

And although the film's cast is almost entirely Latino, Avila doubts that will be true of its audience. "My hope is that people will identify with the film regardless of whether or not they are Latino. I want to tell the best version of this story as possible, with all the complexity these characters deserve," Avila said.

It is Avila's commitment to story that has propelled each of his projects and earned him praise. A graduate of the UCLA School of Film and Television, he first gained attention in 1991 with his short film "Distant Water," a coming-of-age story set in 1943 Los Angeles. The short won the Grand Prix award at the inaugural Film Festival of International Cinema Students in Tokyo and was later screened at the Sundance Film Festival, The Whitney Museum in New York, the VII America's Film Festival in Washington, D.C., and San Antonio's CineFestival. Avila wrote and directed La Carpa and wrote, directed, and produced Foto-Novelas for PBS. So, with his mounting credentials, landing a feature film would seem inevitable for Avila. The transition, however, was not effortless.

"I wasn't ready for the switch from PBS to New Line Cinema. At PBS, it was a coal mine, but it was a really great one. With New Line, there was a whole new mentality. There were some spirited debates because I wanted to be responsible to them and to the story," he said.

Despite the debates, Avila, along with Latino filmmaker Gregory Nava (Selena, El Norte) cites New Line Cinema as having a welcome tradition of working with new filmmakers, particularly Latino filmmakers.

"New Line is interested in our world," Nava said at a recent SXSW Film panel on Latino filmmakers. "They see Latinos as a niche market and a way to expand their audience."

Considering Avila's past work, his sincere and friendly manner, and Price of Glory in his corner as a potential "crossover" hit, it comes as no surprise that Avila's career is taking higher and higher leaps.

"I grew up in Echo Park, 10 miles from Hollywood," he said. "Yet it couldn't have seemed farther away from me."

With Price of Glory, Avila has arrived.