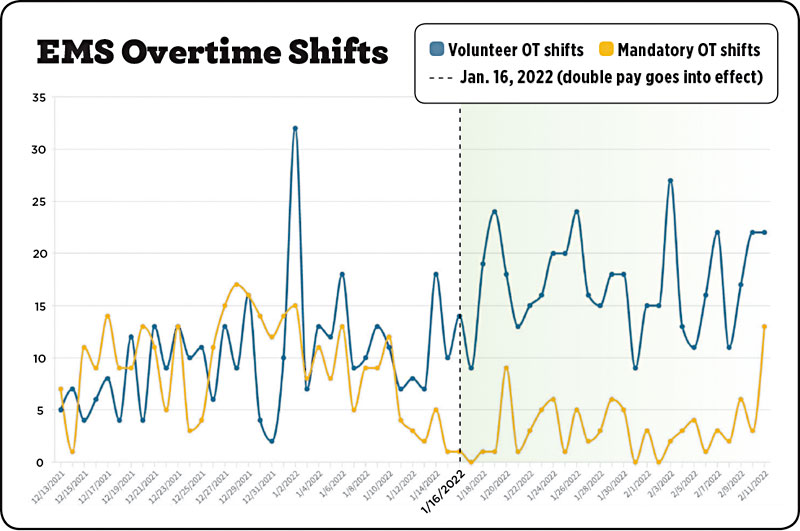 The number of volunteers called in for overtime shifts climbed as the number of mandatory call-ins plummeted after the pay increase (Source: Austin-Travis County Emergency Medical Services)

For the past two months, field medics and communications staff at Austin-Travis County Emergency Medical Services have earned double pay for all overtime shifts they volunteer to work. It's a financial incentive that medics demanded for the past two years as they watched colleagues burn out from a combination of strenuous COVID-19 working conditions and relatively low wages.

The burnout created the same vicious cycle seen across many job fields: As the ATCEMS workforce dwindled, the need for medics to work mandatory overtime shifts grew. The increase in mandatory OT – which, until Dec. 20, 2021, was not guaranteed to pay even 1½ times a medic's wage – accelerated burnout, which further diminished the department's ranks. Front-line medics had a simple solution: Offer double pay for volunteer OT shifts. Medics argued doing so would boost morale and result in fewer holes in the department's scheduling policy, which aims to staff every ambulance with two medics, because people would line up at the chance for double pay. Moreover, all of this could be accomplished before the new contract between the Austin EMS Association and the city of Austin was finalized. (The contract is still being negotiated; AEMSA is awaiting a counteroffer from the city on their pay and benefits proposal.)

Sources told the Chronicle that morale improved immediately following then­-interim Chief Jasper Brown's decision to finally offer double pay on Jan. 16 (the incentive expires April 15, but the department is even more short-staffed than when it was implemented, so it could be extended). Data we obtained through an open records request backs up what we heard anecdotally: The number of medics volunteering to fill overtime shifts increased by 68% in the 30 days after double pay compared to the 30 days before, while the number of medics called in on mandatory overtime decreased by 69%. During each of the five weeks before double pay was offered, the ratio of volunteers to non-volunteers called in for overtime was about 1-to-1. In the four weeks following the pay increase, that ratio changed dramatically, with about five times as many volunteers as non-volunteers.

“Money is a huge motivator in reducing the holes we have in staffing, and if we increase our base wage, it will reduce the holes in our staff even further.” – AEMSA President Selena Xie

The data also showed that, following implementation of double pay, the department maintained a daily average of about 30 field medics who signed up for the volunteer overtime shift, which supervisors draw from before calling people assigned to the mandatory overtime list. The ATCEMS Public Information Office said the number of medics signing up for the volunteer list before Jan. 16 was unavailable, due to a ransomware hack on Kronos, the time management system the department uses, which disrupted payroll management for more than 2,000 organizations. However, there's a stark difference in the number of people on the mandatory overtime list (a daily average of 16 medics before double pay compared to three after double pay), presumably because more medics were volunteering to fill shifts rather than waiting for their name to be selected from the mandatory list.

How the double pay affected separations from ATCEMS is less clear. According to AEMSA President Selena Xie, 14 employees separated from ATCEMS during the time period, with eight separations occurring before double pay and six occurring after. Only two of the employees hit full retirement eligibility; four others separated before working at ATCEMS for one year – a reflection of how hard it is for the department to retain employees under the current working conditions and pay offered to new hires. Xie said finalizing a new contract, with a higher base wage, will help this situation. "Every day we don't have a signed contract is another day we can't get to work on these critical issues facing our department," the union president told us.

"Having double pay has increased the willingness for our medics to work overtime," Xie said. "Obviously it shows that money is a huge motivator in reducing the holes we have in staffing, and if we increase our base wage, it will reduce the holes in our staff even further. As soon as we come up with an improved pay scale, it will encourage people to work for us."