Austin Slowly Gets the COVID-19 Testing Data It Needs 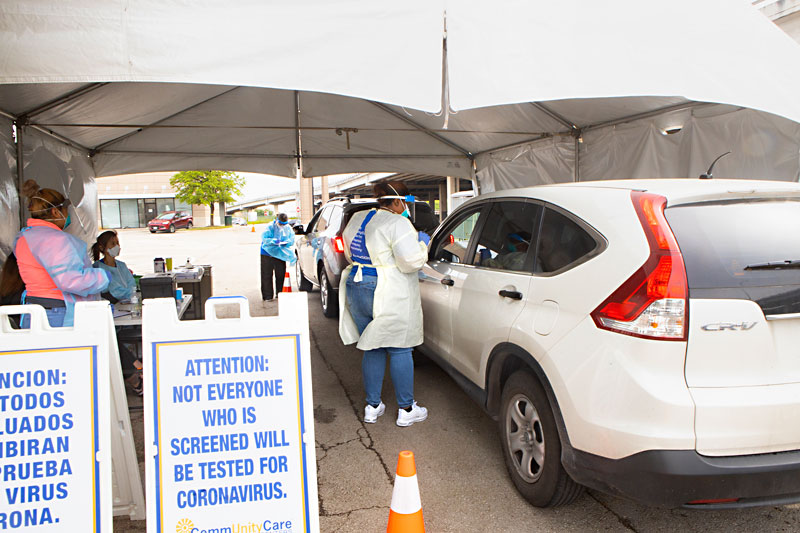 In a world that has changed dramatically in recent days, one thing that hasn't changed enough is the availability of testing for the novel coronavirus that causes the deadly and contagious disease called COVID-19. In the absence of effective treatments or a vaccine, experts say, only testing on a large scale would allow public health officials to pinpoint where the disease is and is not circulating, which would in turn allow the easing of social distancing restrictions. Yet across the nation, testing capacity continues to fall well short of demand.

CommUnityCare’s Hancock site offers “the only free COVID-19 testing without an appointment in Travis County for people with no insurance and no doctor.”

Grasping why we still don't have faster and more available testing has also been a challenge; multiple public and private systems, government processes, and supply chains all play a role. In the earliest days of the pandemic, only the federal Centers for Disease Control and Prevention tested for COVID-19. By Feb. 1, a handful of state and local labs were also conducting tests, but CDC confirmation was still required. As the need for more and faster testing grew, the CDC tried but failed at initial efforts to develop a test for wider distribution.

The Food and Drug Administration then loosened controls on testing to bring in universities and private commercial labs, yet more than a month later, testing remains rationed and often slow. Aside from the time it takes to ramp up new labs, staffing issues and lack of personal protective equipment (PPE) for health care workers who collect samples have hampered capacity. Shortages of nasal swabs and of chemicals needed to analyze specimens have also been widely reported.

Back on March 13, Gov. Greg Abbott announced that just 220 people had been tested for COVID-19 statewide. Five days later, when the state began to publish daily statistics, that number had grown to 1,268, with about half processed at private labs. One month later on April 13, the state reported that 133,226 tests have been done, 94% of those by private labs; about 10% of these tests showed positive results. Overall, fewer than 0.5% of Texans have been tested. Central Texas has seen improved access to testing during that month as drive-up sites open across the region. Some of these require preapproval from a physician or from Austin Public Health; others offer screenings on the spot. But data on how much testing is actually being done, or where those tests are being sent for processing, mostly remains unshared.

An exception is CommUnityCare, which began offering drive-up testing at its Hancock Center clinic (1000 E. 41st) on March 17. The site offers "the only free COVID-19 testing without an appointment in Travis County for people with no insurance and no doctor," said Central Health spokesperson Ted Burton via email. "The site tests more than any other location in Travis County" – about 60 to 100 people per day on weekdays. The Hancock clinic is open Monday-Saturday; CommUnityCare sends specimens to five different labs, with a turnaround time of about 24-48 hours for results, and is planning to offer testing at more locations soon, Burton said.

In an April 10 email, Dr. Jay Zdunek, chief medical officer of Austin Regional Clinic, told the Chronicle, "ARC conducts COVID-19 testing at [its] drive-up testing sites and at our other primary care clinics in 12 cities in Central Texas; that's 20 locations in all. We switched to a different commercial lab about two weeks ago, and the response is now much improved, usually reporting results to patients within 2-4 days." Zdunek declined to specify how many tests had been performed, explaining that, "Our volume of testing has increased only because we now have more testing supplies. It is not indicative of whether or not we are seeing an increase in cases." Processing COVID-19 tests at CommUnity Care's Hancock Center drive-up site (Photo by Jana Birchum)
“Our volume of testing has increased only because we now have more testing supplies. It is not indicative of whether or not we are seeing an increase in cases.” – Austin Regional Clinic’s Dr. Jay Zdunek

A spokesperson for Baylor Scott & White, which analyzes specimens in-house and began offering drive-up testing services in mid-March, referred questions about local testing statistics to Austin Public Health, as did spokespeople for Ascension Seton and St. David's HealthCare. Meanwhile, APH told the Chronicle via email that it "does not have the total number of all tests performed in Austin-Travis County," adding that "providing this data has been a work in progress" but that they hope to provide more information soon. At an April 14 news conference, APH Interim Health Authority Dr. Mark Escott indicated the department would be sharing more detailed information on testing, as well as on COVID-19 hospitalizations and deaths, later this week.

The Texas Department of State Health Services recently began posting testing totals by county on its statewide COVID-19 dashboard; DSHS reported 6,221 tests had been performed in Travis County as of April 8, including public labs, commercial labs, hospitals, physician offices, and drive-through sites. In an emailed statement on April 8, DSHS spokesperson Lara Anton wrote: "As of yesterday, there were 86 private labs and 10 public health labs reporting test results to DSHS. ... Some hospital labs are testing but the majority of the testing is being done by the large private lab companies who may direct their specimens to any of their lab locations." Two of those companies, Labcorp and Quest Diagnostics, did not disclose to the Chronicle data on their volume of testing either locally or throughout the state.

Though access to testing has increased in recent weeks, it is still not easy. Many providers are following CDC guidance that testing should be prioritized for health care workers and first responders; people sick enough to require hospitalization; and those at high risk due to age, underlying health conditions, or other factors. Those with symptoms may be tested but are deemed low priority. This guidance has changed over the weeks since the onset of the pandemic.

An employee of one organization involved in testing, who asked not to be identified, told the Chronicle, "Originally it was, 'Have you traveled within the last 14 days to these high-risk areas, and have you had any contacts that have tested positive?'... Then all of a sudden it changed to 'Do you have fever and shortness of breath and cough? And if you do, then we can do the testing.' And then, they [the labs] were overwhelmed," this person said. Currently the organization is "really only testing people who are severely symptomatic, that are having trouble breathing, that need physician-directed care in the hospital."

For the past month, the general message to those who are ill or concerned about exposure, but not sick enough to require hospitalization, has continued to be "assume you have COVID-19 and act accordingly" – in other words, self-quarantine. This means Austinites are isolating themselves even when they don't have COVID-19. Long waits for test results, caused by overwhelmed labs and scarce supplies, may be creating the same outcome.

The Chronicle talked to four individuals who were tested in the last several weeks, some at their own request upon feeling ill, others after being contacted by APH. Two of these four received their results 13 or more days after being tested, meaning they had to self-quarantine regardless. The third person waited about a week for results, the fourth about three days.

Some doctors will order a test for anyone who wants one, although patients may face delays in getting results. Vanessa Goldberg, practice manager and director of operations for Oubre Medical in West Lake Hills, works for one of those. "Primary care [physicians] have access to the tests, but so many PCPs are turning their patients away, stating that they do not need to be tested," she told the Chronicle via email. "We feel strongly that anyone who has symptoms (even mild) or has been exposed to someone with COVID should be presumed sick until proven not." Goldberg noted that turnaround times had become "painful" for their patients; the private labs the practice had been using were "pushing 2 weeks for results" because labs had become "overrun," which had them looking at other options. 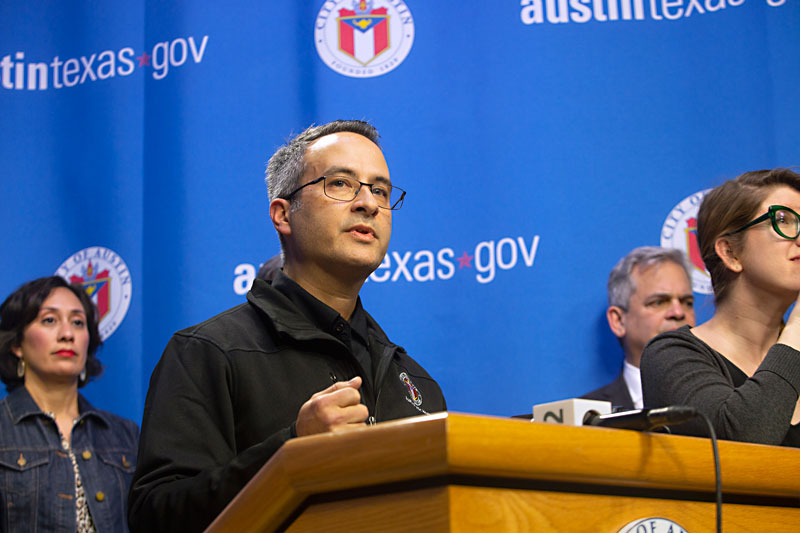 Dr. Mark Escott (Photo by Jana Birchum)
“We don’t want people to be delaying their care if they are getting worse at home because of a concern about the ability to pay for those services.” – Austin Interim Health Authority Dr. Mark Escott

Most providers collecting samples in the Austin area charge fees (or accept insurance); even when tests are free, patients may still pay for the medical professional who screens them to approve the test. As DSHS's Lara Anton explained, "Doctors can order tests from private labs at their discretion. They do not have to follow the testing criteria that the public health labs do. Testing done at a public health lab is only for people who meet the testing criteria after consultation with the local health department. There is no charge to the person if they are tested by the public health lab."

Last month, an Austin startup called Everlywell was one of several commercial firms that announced plans to roll out tests that people could self-administer at home and then send to labs for analysis. That move was put on hold when the FDA issued a strongly worded statement on March 20 "to alert the American public that, at this time, the FDA has not authorized any test that is available to purchase for testing yourself at home for COVID-19."

At the Austin City Council work session April 7, and again at a news conference a week later, Escott said an APH program is in the works to allow individuals to request tests directly, rather than via a physician or telehealth consultation. This is, in particular, an equity issue; Escott and local leaders are concerned about residents in Travis County's Eastern Crescent with higher incidence of diseases like diabetes, heart disease, and asthma that increase their risk of severe COVID-19 complications, who may face delays in accessing care. Escott urged anyone feeling sick, having shortness of breath, or experiencing chest pain to call 911. "Our ERs stand ready to care for those individuals and we don't want people to delaying their care if they are getting worse at home because of a concern about the ability to pay for those services," he said.

Escott also told Council that better data was on its way. "This has been a challenge due to the various methods of reporting of the tests from the different labs," he said. "We are definitely getting positive results; the challenge has been getting the negative results as well, so we can determine how good we're doing at testing community-wide. ... The state is also working on this with the labs." Escott also said APH is working with the UT Dell Medical School and other health experts on its advisory panel to review how blood serum testing might be used to help to determine if people have immunity from the virus through a prior exposure.