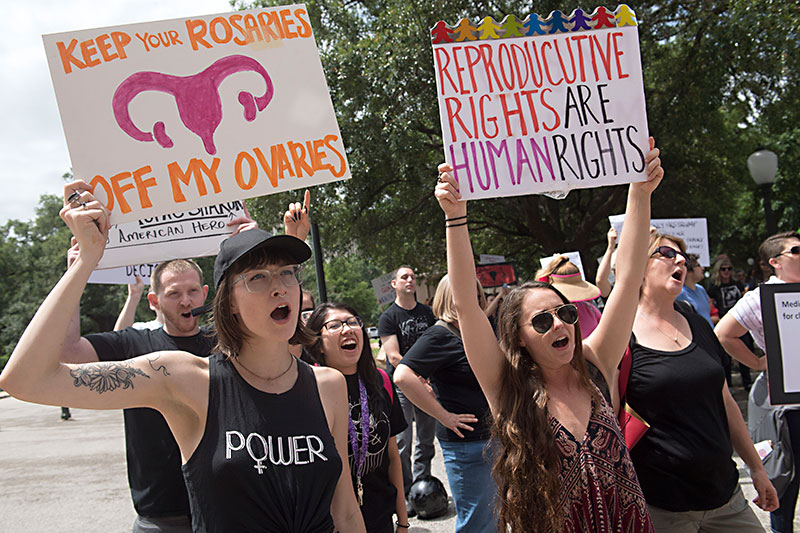 As part of coordinated protests across the nation, "Stop the Bans" activists rallied at the State Capitol on Tuesday, even as SB 22 and HB 16 crept closer to Gov. Abbott's desk. (photo by John Anderson)

In a direct attack on Austin's Eastside Planned Parenthood clinic and other vital local health partnerships across the state, the House passed SB 22, which bars any "taxpayer resource transaction" between a local government and an abortion provider or affiliate, following an often emotional six-hour floor hearing on Friday, May 17. House bill sponsor Rep. Candy Noble, R-Allen, cited the subsidy that taxpayers are supposedly forced to provide the "abortion industry," although no state or federal tax dollarsgo toward abortion care. Eliciting loud cheers from advocates seated in the House gallery, Rep. Eddie Rodriguez, D-Austin, whose district includes the Planned Parent­hood clinic on East Seventh Street, questioned Noble's intent: "How are you protecting my taxpayers in Austin, Texas, with this bill?" While having no impact whatsoever on abortion care, SB 22 will ultimately jeopardize basic preventive health care like cancer screenings and birth control.

Democrats offered several amendments to mitigate the damage caused by SB 22, including protecting contraception access in areas with high repeat teen pregnancy rates (Rep. Gina Hinojosa, D-Austin) and local Planned Parenthood partnerships to address public health disasters like Zika (Rep. Sheryl Cole, D-Austin). Noble rejected each without explanation. "The bill disguises itself as an anti-abortion bill, but it's about cutting off access to people who are under- and uninsured," said Rep. Jessica Farrar, D-Houston, before a final vote was taken. "It will actually have the impact of driving up abortion rates by cutting off access to birth control services." The House's 81-65 vote means the bill is just one step away from Gov. Greg Abbott's desk; the Senate must first sign off on a Repub­lican-authored House amendment.

Meanwhile, the Senate was busy inching another anti-choice bill Abbott's way; on Thursday, May 16, the Senate gave its OK to the so-called "Born Alive Protection Act" (House Bill 16) that stigmatizes abortion care by imposing criminal penalties on physicians who don't treat babies born following unsuccessful abortions – a circumstance that has never been recorded in Texas state health data. "We don't have any evidence that it's necessary. Its purpose is to interfere with the legitimate practice of a profession and the constitutional rights of people," said Sen. Nathan Johnson, D-Dallas. Sen. Judith Zaffirini, D-Laredo, and Sen. Eddie Lucio, D-Brownsville, joined the GOP in voting for the measure.