"Everybody is really saying the same thing"

CodeNEXT Draft 3, the "baseline" for future land use code revisions

Given how bumptious folks have been for years and years on the subject, last week's return to the dais of the Land Development Code revision, aka NextCodeNEXT, aka CodeCRONK, proved rather anticlimactic. Council itself had largely answered the policy questions put to it by City Manager Spencer Cronk regarding the rebooted rewrite's scope and breadth, at the prior Tuesday's work session and on the Council message board; thus, the meeting itself was the occasion for public comment, which confirmed that yes, people would still like Austin to fix its broken and obsolete land use code, and some would like it to do so really soon. And many would like to go beyond where CodeNEXT stalled out in mid-2018, but others would like to focus on small area plans and "context-sensitive" decisions rather than blanket upzonings, though most everyone feels affordability should be the city's highest priority.

Armed with that revelatory input, Mayor Steve Adler's office quickly turned around documents that aim to convey Council's best and final direction to Cronk, with a potential record vote to move forward (which the manager has asked for) on the agenda for next Thursday, April 25. Assum­ing no major changes, that would bring back both a revised code and zoning map, using the last CodeNEXT draft "as a baseline," in October, kicking off a public engagement and decision process that's yet to be determined. Unlike with the misbegotten CodeNEXT drafts, there will be no holdover zoning from the current code (with minimal exceptions). The new code should enable meeting not only the overall housing goals (which many builders say are too low) but the specific affordable housing goals of the city's Strategic Housing Blueprint, with 30% of that new housing to be "missing middle" types that straddle the design and income gap between single- and multifamily homes.

Increased by-right entitlements, though, would be restricted to where the city wants to achieve those sorts of community benefits, and primarily only in designated activity centers and corridors (from the Imagine Austin comprehensive plan), though accessory dwelling units ("including tiny homes on wheels") would be encouraged broadly. Compatibility standards and parking requirements would be waived for parcels in or adjoining centers and corridors, though "context-sensitive" exceptions could be determined by staff or by Council direction. The current draft Council response also commits the city to complete small-area planning throughout the centers and corridors – where, ideally, the sensitive contexts would be identified and addressed – within five years, acknowledging that "additional resources will be required" to pull that off.

Adler and at least six Council colleagues continue to make clear this is what they believe Austin needs and what the city voted for last November; that sense of a mandate conditioned the repeated calls for more "civility" in land use dialogue this time around, which were well-heeded by Thursday's various speakers. "Everybody is really saying the same thing," noted Mayor Pro Tem Delia Garza in thanking the crowd, "We just want to live in this great city .... It's just unfortunate how this often becomes so divisive."

Earlier in the day, Council had also, with little dissension, managed to give its final approval to the Austin Strategic Mobil­ity Plan, which among other things lays the groundwork for the transportation system that would be needed to support the new density enabled by the new code. The desire to consider land use and mobility in tandem, as they should be, inevitably led to consternation from citizens who needed Council reassurance that the ASMP did not automatically rezone their corridor-adjacent properties. Almost all Council members proposed amendments to the staff's final ASMP draft, with key flash points including the long-vilified State Highway 45 (it stays) and the "pork chop" barrier separating the Crestview and Highland neighborhoods on Lamar (it goes).

In addition to more LDC talk, the April 25 agenda includes a contentious zoning case to build new affordable apartments near I-35 and Rutherford Lane; extension of the city's contracts with the out-of-state forensic testing labs that have helped clear the rape kit backlog; and the appeal by adjoining neighbors of the outdoor music permit granted to the Yard Bar on Burnet Road.

A version of this article appeared in print on April 19, 2019 with the headline: The Sky Remains Blue 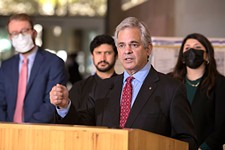