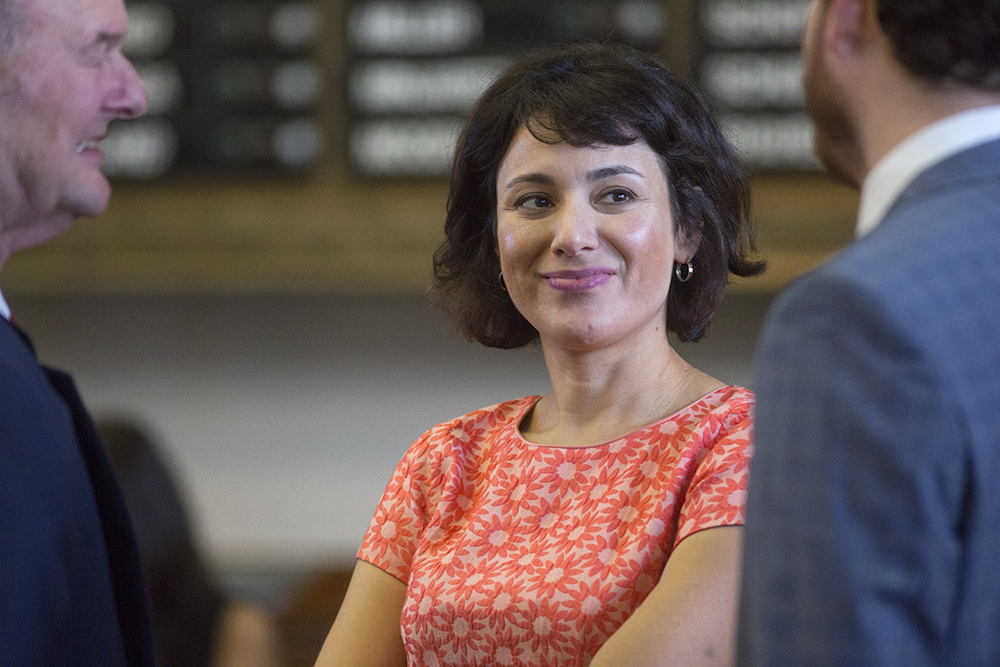 Gina Hinojosa (HD-49), the former president of the Austin ISD board of trustees, was elected in 2016 to represent Central Austin; she served last session on the Homeland Security and Public Safety, Economic Development, and House Administration committees. – Mary Tuma

Austin Chronicle: What are your top priorities this legislative session and why are they important to your district?

Gina Hinojosa: My priority for this session, just like last session, is the public school finance system that we know is broken statewide. We know Austin is feeling the brunt of this broken system in a big way, with most of money we collect [in property taxes] for our maintenance and operation fund going to the state in recapture. But really, it’s not just property-rich school districts that are paying the price. Any district that sees an increase in its property value gets less money from the state for public education; in that sense, everybody is in recapture.

So we need to have the state pay its fair share into the school finance system. In 2008 state and local taxpayers basically split public education 50/50. Now the state’s share is 33.9%, while the local share for neighborhood public schools is 66.1%. It’s very lopsided, it’s unsustainable, it’s not working.

There are different ways to approach the problem, [but] unfortunately some are looking at it as an opportunity for property tax relief. We need to have the same urgency behind adequate funding for our public schools – not just making the state pay a larger share of the cost, but a way to invest more, because really we haven’t recovered from the 2011 cuts to education. Our schools are still feeling that. We’ve also been hit with lawsuits over how we do special education; the [U.S.] Department of Education, even under Betsy DeVos, said we aren’t doing special-ed right. So this session I want to focus on making sure that we are doing right by the most vulnerable children in the state.

Last session I was able to pass a bill that created a strategic plan to remove barriers to access to long-acting reversible contraceptives (LARC), like IUDs, so now I’ll be filing bills to implement the recommendations of that plan. I’m also focused on the day care crisis in our state. Children are being hurt and even dying in some facilities, and that has to do with how little we do as a state to help families with the cost. We need to prioritize childcare for working families. I filed a bill last year with Dennis Bonnen to incentivize employers to contribute to their employees’ dependent care accounts, which help with daycare costs. So I’ve re-filed that bill.

This last election cycle, we saw challenges with student voting on college campuses, so I’ve filed a bill to require all college campuses with 10,000 or more students to have polling locations on campus. We know for many students transportation is an issue, and getting to the polls in between classes is an issue if you have to leave campus.

AC: You expressed criticism of the process of getting behind Bonnen for Speaker. What are your concerns?

GH: Democrats have picked up 12 seats. We have increased leverage and increased momentum on our side, so we need to own the power that has been given to us by the hard work people did to get us those 12 new seats. [Editor’s note: Hinojosa’s father Gilberto is the chair of the Texas Democratic Party.] That should apply to every decision we make; we should have a higher bar when it comes to expectations of this new session, because of our increased leverage. We’re only eight members down from parity. When we’ve got the better ideas and Texans on our side, especially when it comes to public schools, we should fight for even more than we may have in previous sessions, because we might be able to win some.

“Democrats have picked up 12 seats. We have increased leverage and increased momentum on our side, so we need to own the power that has been given to us by the hard work people did to get us those 12 new seats.”

I think we had the opportunity to elect a speaker with our members, and that didn’t happen and I was disappointed. We made a commitment to one another and I honored my commitment and I had the expectation that others would as well. That being said, I had a good meeting with Dennis Bonnen, and we will move forward do the best we can for Texans and everything we can to advance the progressive agenda.

AC: You were a freshman legislator last session. What were the biggest lessons you learned? The biggest surprises?

GH: With one session under my belt and having just gone through an interim, it’s interesting how much how different it is. I didn’t get the keys to my office or a full staff until a few days before session started [in 2017]. We’ve had time in the interim now to prepare and we’ve been working really hard. So I don’t know how I did it, thinking back [laughter].

The most surprising thing to me is that I can work across the aisle with the GOP and get things done, because I live in a bubble; most people I know and work with are Democrats. So it was a new experience for me to work in an environment that was majority Republican, but we got along well and found common ground – that was surprising to me. If we were all forced to work with one another in a room for six months, with people from all parts of the state with different persuasions and beliefs, we’d have a better society, we’d be better at respecting each other’s humanity.