As Austin ISD modernizes one Eastside campus, others remain fearful 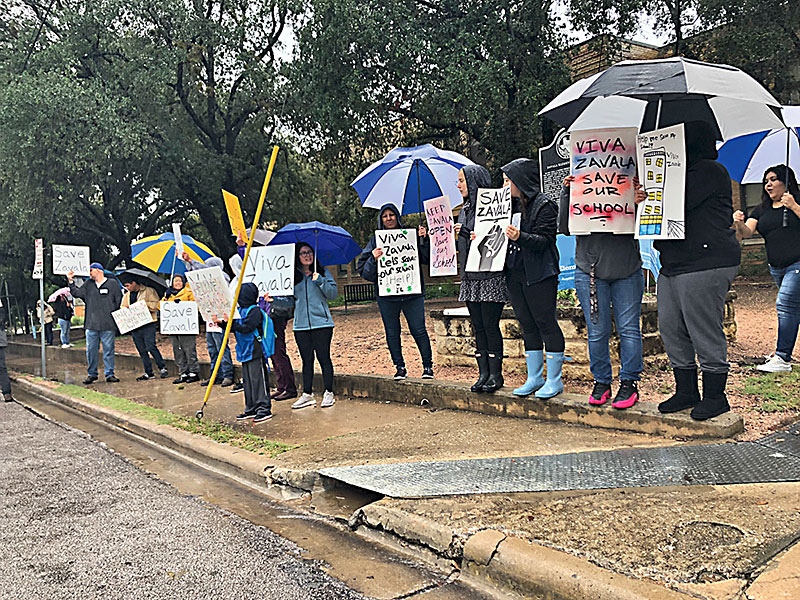 Despite the rain, protesters lined Robert Martinez Jr. Street in front of Zavala Elementary School to draw attention to the school's uncertain future, and to ask for more help from the district administration to prevent a possible closure. (Photo by Austin Sanders)

Parents, students, and former staff rallied in the cold rain outside Zavala Elementary School on Monday to draw attention to what they see as a lack of transparency from Aus­tin Independent School District officials over the future of the East Austin school.

A vote last month by AISD's board of trustees to approve a $25 million modernization project at Sanchez Elementary over Zavala and Metz Elementary schools has left parents and community members worried about the fate of the two nonmodernized schools. Because Zavala and Metz are located within 1.3 miles of each other, parents are worried that the district will move to shut down one, or both, of the schools if they are unable to raise enrollment to levels the district sees as sustainable.

Last year, the board approved a facilities master plan that would make any school experiencing three years of underenrollment eligible for closure. Over the past three years, enrollment at Zavala has dropped from 399 to 297; the school has a capacity of 561 students. AISD officials said the school would be considered sufficiently enrolled if it could hit 420 students.

Zavala will remain open for the foreseeable future, but the board will likely make a decision on it and Metz in 2020; the modernized Sanchez campus is set to reopen in 2021. During that time, campus administrators say they'll work with district staff to implement targeted utilization plans aimed at boosting enrollment at each school.

Those gathered on Monday said they could rally families in the neighborhood to commit to enrolling their children at Zavala, but the shadow of closure would make the task more difficult. (As would the district's forthcoming decision to select Metz or Zavala as a temporary swing space used to house students from Sanchez while their school is under construction.) A Zavala volunteer of nearly three decades, Dennis Fagan said the threat of closure poses a challenge to many of the initiatives the school would need to undertake to increase enrollment. "It makes it harder to hire volunteers to help at the school, to retain these great teachers we have, or to win grants to fund afterschool programs," he said. He noted that some of the grant-funded programs could help attract families, but they generally want multi-year commitments from a school – a challenge for Zavala given the uncertainty of its future.

For now, the Zavala community will focus on building enrollment by canvassing nearby residences. While that effort is underway, PTA president and rally organizer Brenda Garza said she hopes the district "just leaves us alone, so we can help the school grow." Garza also called on district officials to be "truthful" about Zavala's future: "If we don't know what's going to happen to our school in two or three years, how can they expect us to raise enrollment?"