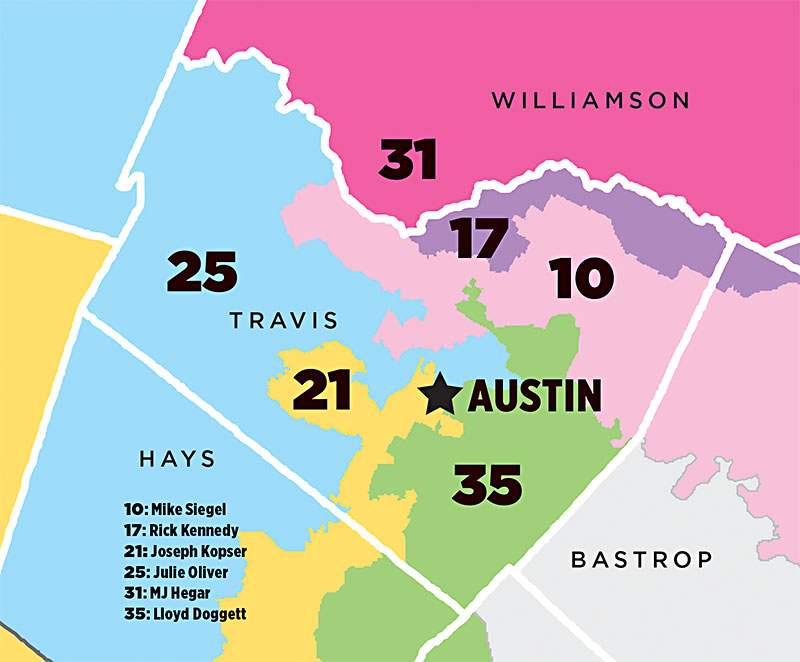 It's no accident that five of the six congressional districts that cross the Austin city limits – TX-10, 17, 21, 25, 31 – are weighted heavily against Democratic candidates. As the incumbent in the sixth (TX-35), Congressman Lloyd Doggett, said last week, "Every one of these districts was carefully crafted with a computer to guarantee that only a Republican ... would be there for this decade, and it has worked thus far." While the other five districts were "cracked" to be dominated by Republican voters, TX-35 was "packed" to include as many Democrats as possible, and also with the (thus far vain) GOP hope of replacing Doggett and his House seniority with someone more junior, likely from San Antonio.

Nevertheless, the five underdog Democrats in these campaigns remain intent on overcoming the long odds, and it's possible that some might succeed. Doggett warned that it won't happen in these districts or elsewhere without intense grassroots organizing efforts. He points to the recent GOP flip of the Democratic state Senate District 19 (where Pete Flores defeated Pete Gallego in a special election) as a warning against complacency. "I see it mainly as a great big blinking light saying, don't just keep talking to yourself and trading social media with yourself. You've got to actually get out and do some work to get people out, or we will not be successful. ... This is Texas, and without significantly greater effort than was put into that race, we're not going to have any victories."

In addition to Doggett, we talked to the Austin-area Democrats running uphill for Congress about the state of their campaigns, about what's resonating with voters, and about their own sense of their chances for an upset.

The “District Snapshots” rely upon the analytical web site FiveThirtyEight.com (contributions drawn from Cook Political Report, Inside Elections, and Sabato’s Crystal Ball) as of Oct. 1, 2018. Comments of the Republican candidates are from their campaign websites. The “Money Race” totals are from the Federal Election Commission and the OpenSecrets.org website provided by the Center for Responsive Politics, for the most recent reporting period (June 30, 2018). Third quarter closed Sept. 30 – reports not yet released.