Glenn Scott Fought for Her Life, and Yours

A comrade in arms 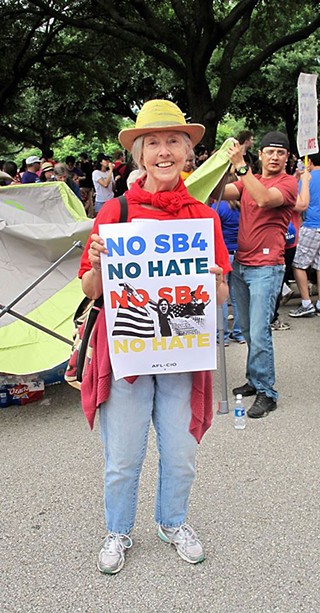 Glenn Scott on March 29, 2017, fighting for immigrants' rights at the Texas Capitol (courtesy of the Scott Family)

As I was leaving Glenn Scott's home in South Austin last weekend, her husband Richard made sure to remind me: "Don't forget the hats!"

But who could forget the vibrant and colorful wardrobe of the longtime labor activist and feminist, a founding member of the Democratic Socialists of America, and mentor to countless members of the city's organizing community? When Glenn Scott died on Sept. 11, friends, colleagues, and former combatants were each quick to take note the lavish hats and scarves that would adorn the woman while on the front lines of fights for the rights of teachers, nurses, and the vulnerable, dating back to the Seventies.

Though she'd been seriously ill, this spring Scott block-walked for candidates she believed in, like Chito Vela and Derrick Crowe. She campaigned for the historic $250 million housing bond City Council approved for voter consideration in November. And as recently as a month ago Scott was tending to her sick daughter, Tillie (named for feminist writer Tillie Olsen), and singing songs to her 8-month-old grandson Hendrix.

Scott was born in Ft. Worth, and moved to Austin in the Seventies to work on The Rag. She moved back to Ft. Worth to teach seventh grade for a year, then returned to Austin horrified over how girls and Spanish-speaking students were treated, determined to effect change. She got into socialist politics, and in 1982 took a job organizing with the American Federation of State, County, and Municipal Employ­ees. Six years later she moved on to the Amalgamated Clothing and Textile Workers Union, where she grew enamored of the union-made hats and boots that would become her trademark.

She spent the bulk of the Nineties working to improve teacher conditions at the Amer­ican Federation of Teachers, and joined the national organization in 2007. In 2011 she shifted her focus to El Paso, joining National Nurses United. She retired in name only in 2015 – three years after her cancer metastasized – but continued to advocate for tenants, immigrants, and women until recently.

Scott's passion earned her the reputation of a bulldog. She could go toe to toe with a room full of labor law attorneys and refused to back down when she knew she was right. "She was firm," said Richard. "And she didn't get intimidated."

News of Scott's death devastated the community that knew and loved her, and led to an outpouring of support. Austin DSA, the organization she helped found, remembered Scott as a "tireless advocate for justice and equality." Educa­tion Austin Pres­i­dent Ken Zarifis recalled how she supported him during his own battle with cancer. "She was everywhere," he wrote. "She never stopped fighting cancer and she never stopped fighting the system." Texas AFT President Louis Malfaro described Scott as a "soldier and fighter. ... Everybody saw her selfless spirit in the work she did and they were drawn to her fights. They wanted to be her comrade in arms."

City Council Member Greg Casar told about a time when he was still a political neophyte and Scott, during a meet and greet with U.S. Sen. Bernie Sanders, made an effort to include him "as if I had been doing progressive work in Austin for 30 years already. ... Glenn knew this was a very sweet untruth. But she did this sort of thing intentionally. Instead of being intimidating with her experience, she gave me a little boost. I was less nervous, more authentic, and did a better job that evening as a 25-year-old trying to pretend to be an elected official. She made it easier, but also pushed me to try to live up to her kind words."

Though Scott was known for the work she did, she never lost sight of what was important. She was an avid photographer and cook, and was often seen out with Richard as many as four times a week seeing live music. Said Richard, "She worked 12 hours and played six."

City Council will issue a proclamation in Scott’s honor at its next meeting, Thursday, Oct. 4. That same evening, at 5:15pm at City Hall, friends will hold a candlelight vigil and march to the Capitol. Everything Old Is New Again
A Texan's in the White House, we're in a quagmire war – and 'The Rag' returns to Austin