The heat is on in the state’s House and Senate 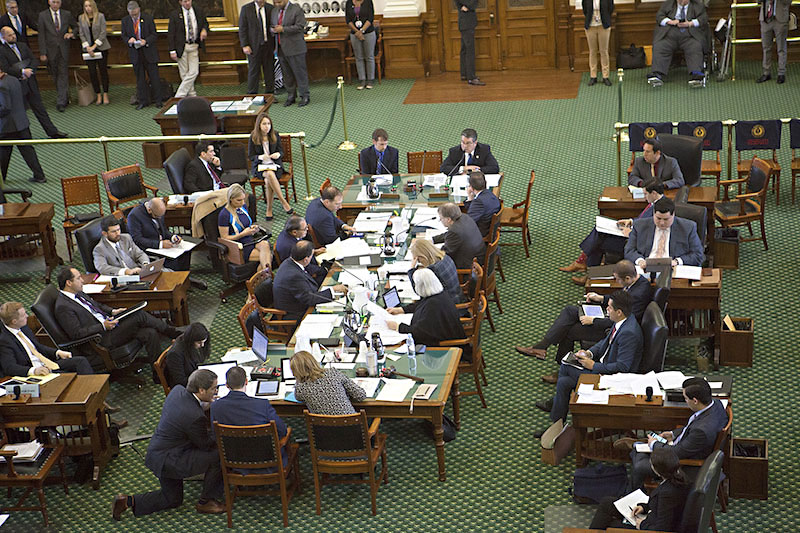 • A weakened version of the Sandra Bland Act, named after the 28-year-old black woman who died in police custody after a 2015 traffic stop in Prairie View, looks likely to pass. On May 15, the House Criminal Jurispru­dence Committee approved SB 1849, removing the original language about racial profiling, instead concentrating on jailhouse mental health provisions. Committee Chair Garnet Coleman, D-Houston, who authored the House version, expressed disappointment at the reduction, but supports it.

• Senate Republicans have equally crippled HB 62, the proposed statewide texting-while-driving ban, by demanding changes that would make it toothless. For example, a ticket could only be issued if the offense is seen by a police officer. The bill would pre-empt the current patchwork of 101 local ordinances around Texas, many of which are actually tougher than HB 62.

• On May 12, the House voted to require hospitals, community health centers, and birthing clinics to report abortion-related complications to the state health department, considered an unnecessary measure by pro-choice advocates; abortion stands as one of the safest medical procedures. An amendment to Rep. Giovanni Capriglione's HB 2962 from Rep. Matt Schaefer, R-Tyler, places those reports on an internet database and forces doctors to inform the state within 72 hours. It also includes detailed personal information including the patient's last period, her race, and marital status. "You want to know about the marital status of women? How about the marital status of the man who impregnated her?" asked Rep. Roland Gutierrez, D-San Antonio. "When do you stop interfering with decisions that aren't your own?" HB 2962 now moves to the Senate Health and Human Services Committee.

• The House State Affairs Committee moved along another anti-choice bill, SB 20 by Sen. Larry Taylor, R-Friendswood, which bans abortion from insurance coverage, on May 16. The measure would severely limit abortion access for Texans of all coverage plans, and hit low-income and minority women the hardest.

• Sen. Joan Huffman, R-Houston, most likely had the best of intentions when she authored SB 576, to require college faculty, staff, and students who hold leadership roles in university-based organizations to report any incident of sexual harassment, rape, or dating violence committed by or against a student. But her tone-deaf bill will most likely silence survivors who don't wish to report. The bill was scheduled for public hearing on May 17 in the House's Higher Educa­tion Committee, as this issue went to press.

• Short-term rental bill SB 451, filed by Sen. Kelly Hancock, R-North Richland Hills, passed the Senate and has been assigned to the House's Urban Affairs Committee. If passed, the bill would revoke all local STR laws except those specifically created to protect public health and safety. However, its companion bill HB 2551 has been left pending in the same committee without a vote since April 18.

• HB 100, which would override city regulations on ridesharing and transportation network companies, passed through the Senate on second reading Wednesday. A final vote is expected to come Thursday.