Wesley Faulkner to focus on housing and transportation

Candidacies can't become official until July 25 – when the city clerk's office first begins accepting applications for space on the November ballot – but it appears already as though District 2 incumbent Delia Garza will face at least a couple of challengers in her bid for re-election to City Council.

Wesley Faulkner is one. Faulkner announced his pending candidacy via Facebook midway through last week. Speaking Monday, the Springfield Village resident told the Chronicle that he's currently in the process of reading the city's 321-page candidacy packet, is "fully committed" to running, and is already in talks with a potential treasurer to oversee that part of his campaign. Wesley, 39, currently works in social media for the domain registrar company Namecheap, and has a long history of working with various nonprofits, including Big Brothers Big Sisters of Central Texas. He also serves on the advisory board for South by Southwest Interactive. He hasn't announced an official platform yet, but said that he plans to place heavy emphasis on housing and transportation. He said he's running to give the District 2 region "a little more attention than I feel like it's gotten in the past."

"There are a lot of local issues that are not being addressed," he said. "The visibility of our current representative has not been as prominent as I'd like. The other districts' members seem to have a louder voice than District 2. I would like to change that."

Casey Ramos, the second rumored challenger, did not return our request for confirmation. In a June 14 Facebook post, the St. Edward's alum and local boxer – 22-0 in his career with five knockouts, according to The Ring – wrote: "If we run and get elected, we'll focus on infrastructure, affordability and public education." 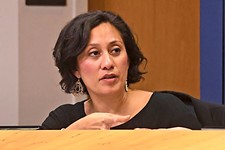