Catching Up to Science 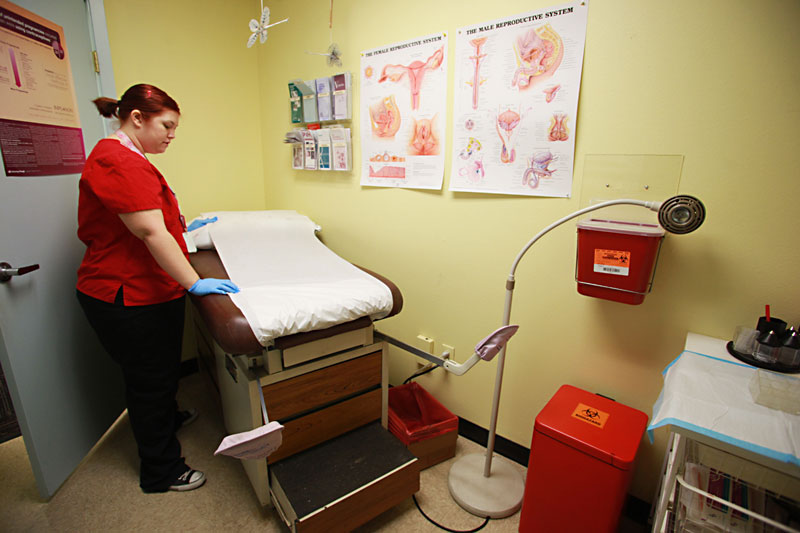 A strict law that prohibited the preferred method of taking abortion medication practically wiped out the option for hundreds of women in Central Texas. However, new federal guidelines are reversing the downward trend for women subject to the state's draconian rules.

When Texas legislators passed 2013's omnibus anti-abortion law, House Bill 2, they included a provision which forced abortion doctors and patients to adhere to outdated U.S. Food and Drug Admini­stra­tion labeling when administering mifepristone (which is taken together with misoprostol to induce abortion). The FDA guidelines, issued in 2000 and based on clinical trials from the mid-Nineties, had been updated with off-label, evidence-based protocol over the years – a common medical practice – to reduce cost, side effects, dosage, and to allow women to take it later in pregnancy. Major medical groups like the American College of Obstetricians and Gynecologists have rejected the outdated FDA regimen for years.

But anti-choice – and anti-science – Texas lawmakers chose to require the outdated FDA protocol in a blatant attempt to reduce the number of medication abortions – and it worked. (Before getting rolled into HB 2, the stand-alone bill was authored by the ardently anti-choice Lt. Gov. Dan Patrick, who was a senator at the time.) Abortion providers sought to challenge the restriction that forced them to adhere to the FDA with a federal lawsuit against the state in 2013, but Judge Lee Yeakel largely left that rule in place. While the spotlight has mostly fallen on the harsh physician admitting privileges and ambulatory surgical center rules – currently being weighed by the U.S. Supreme Court – the lesser-observed pharmaceutical portion has led to drastic changes in abortion care, evidence indicates.

Following the rule's enactment in November 2013, Planned Parenthood of Greater Texas – which has abortion-providing facilities in Dallas, Ft. Worth, and South Austin – ceased offering medication abortion. Vice President of Community Affairs Sarah Wheat explained the reproductive health provider needed time to train staff to follow the Texas-mandated rule. HB 2 reduced the gestational age eligibility for medication abortion to 49 days from the last menstrual period; increased drug dosage from 200 to 600 milligrams; and forced women to take the medication in the clinic, rather than at home (the last requirement creating a severe complication for women who were then forced to travel as the abortion-inducing medication was taking effect). When the service resumed with all its new restrictions last spring, the provider experienced a significant decline in women opting for medication abortion (as opposed to surgical abortion). Prior to HB 2, 40% of women chose the method, after HB 2 less than 1% of women did so.

Adding to the obstacles, under Texas law, women are required to make four separate trips to the clinic (a pre-abortion consultation and sonogram; two appointments for the consecutive doses of medication; and one follow-up) and each time they must visit with the same physician – a logistical dilemma for patients and providers. For women with children, busy work schedules, and few resources, living in a state where the number of abortion clinics has been sliced in half, the option grew inaccessible.

"The Legislature placed multiple barriers for women seeking the procedure," said Wheat. "Four appointments between work, child care, transportation, securing funding, and everything else, left women in a place where it was no longer a realistic option."

The drop at PPGT aligned with findings by the Texas Policy Evaluation Project (TxPEP), a UT-Austin research team studying the impact of state policy on women's health care. In the first six months following HB 2, medication abortion fell by a staggering 70% compared to the year prior, TxPEP found. Similarly, in an article published in the American Journal of Public Health, researchers surveyed 398 women seeking abortions at 10 facilities (including Austin) between May and August 2014 and reported that nearly 40% of women who now lived further from abortion care due to HB 2 clinic regulations had to schedule a surgical procedure instead of their preferred method, a medication abortion. "We found that across the board a significant portion of women wanted to get medication abortion but were unable to," said Dr. Daniel Gross­man, a TxPEP researcher and ob-gyn. "The women who wanted to and couldn't were really angry and frustrated when they realized it wasn't an option, because they had a very strong preference for this method."

It's no coincidence then that when the FDA revised its medication abortion regimen in March, PPGT saw a nearly immediate rise in women opting for the procedure (see "New FDA Guidelines Seen as a Victory for Abortion Rights," March 30). The updated rules allow women to take the medicine through 10 weeks of pregnancy (adding a three-week window), at a lower dosage, and in the comfort and safety of their homes. In April, 37% of abortion-seeking women at the South Austin Planned Par­ent­hood scheduled a medication appointment, and overall, 24% of women seeking abortions at all its three centers did the same, Wheat reported. "When the barriers were lifted, we saw an instant rise in women choosing medication abortion. That's because when women have the choice, this is a procedure that's really the best fit for them," said Wheat. "And we expect the number to steadily head back up since the FDA updated its guidelines."

Grossman and the TxPEP team plan to start examining the statewide rates for medication abortion post-new FDA guidelines later this year. In the meantime, anecdotal talks with clinic leaders signal a similar increase, he says. "We really need to congratulate the FDA for doing its job reviewing the data and coming to a decision that didn't become a politicized process – it's refreshing."