In the wake of Uber and Lyft's exit, drivers and riders look for alternatives 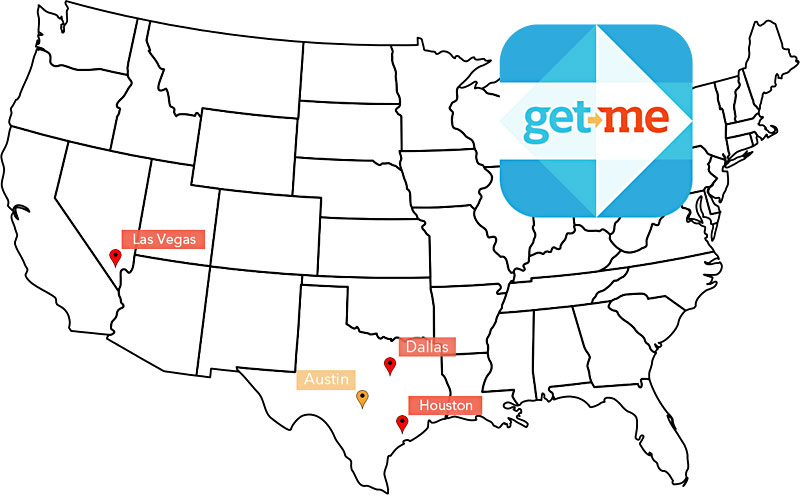 Get Me operates in a few cities besides Austin.

With Uber and Lyft picking up their ball and going home in protest of Prop 1's failure, Austinites who used to rely on the juggernaut TNCs are now figuring out how to get around the city.

Following their loss, Lyft texted drivers that "Austin's new rules prevent Lyft pickups/drop-offs within city limits." In an email to drivers, Lyft said that they're "forced to pause operations within Austin city limits" and that drivers should tell passengers who want to go to Austin, "I'm sorry, but local regulations don't let Lyft operate in Austin." And similarly, when customers open the Lyft app, a message pops up saying, "Due to City Council action, Lyft cannot operate in Austin. Contact your City Council member now to tell them you want Lyft back." That's an interesting way to put it, since it was the voters of Austin, not the City Council members, who struck down Prop 1, and Uber and Lyft themselves who decided to "pause" operations.

On the morning of Monday, May 9, both Uber and Lyft stopped operating in Austin, though they're still available in surrounding areas.

To be clear, despite their endless rhetoric, Uber and Lyft are still allowed to operate in the city – in fact, the rules that they're protesting did not mandate they cease operations immediately. And while both TNCs have argued that their business model can't handle the new regulations, it's important to point out that, according to the Austin American-Statesman, the cost of a fingerprint-based background check is $40, and during the election, Uber and Lyft spent $223.15 for each of their 38,539 votes. And Mayor Steve Adler and others have been clear that they're open to meeting with Uber and Lyft and working out some sort of compromise.

But some Austinites don't see it that way, and are rallying in support of Uber and Lyft. From 1-3am on Sunday morning, a "Glowstache Rally" of Lyft drivers and supporters is scheduled to take place Downtown. Then on Thursday, May 26, from 6-10pm, Austinites will meet outside of City Hall to "Keep Austin Free Market – Bring Back Uber, Lyft." One of the event organizers, Samantha Anne, posted in the group that the protest "is about people that just lost their jobs due to our City Council acting like morons and being greedy. They never cared about how people were going to lose their jobs. Or about how we all benefitted from having Uber and Lyft."

Indeed, with the departure of those TNCs, many Austinites are now out of work. Brandon Olivar, who organized the Glowstache Rally but emphasized that "in no way" is he their "leader," is one such example. "Lyft was my only income apart from my spouse," he told the Chronicle. "It makes it extremely difficult now as I am currently job searching for even the most basic of jobs. I used to be a store manager for Sprint and Lyft's income was comparable to what I made there. Life is a bit difficult but I blame myself for having so much faith in the city of Austin and hoping they would vote 'for' Prop 1." He also pointed out, "There's so many other drivers that are in my position and even worse. I've seen people that are willing to break their lease and move to another city. Many drivers had disabilities and are unable to work regular jobs, and Lyft was perfect for them."

Olivar said that, beyond the income, he "thoroughly enjoyed helping out with keeping drunk drivers off of the roads," and that some of his passengers told him that, left without Uber and Lyft, they'll "just have to take a chance and drive drunk," those passengers apparently forgetting that there are other transportation options, as well as the option to not get drunk.

A handful of alternatives willing to follow the new rules are working to fill the void left by Uber and Lyft. Of course, it's not easy to match the services of a billion-dollar company with years of experience, and the mayor has acknowledged, "There is going to be greater demand than service for a period of time. We ask the community to show some patience."

Get Me, a Texas-based app that offers delivery of goods ("Get Me Something") as well as rides ("Get Me Somewhere"), is the most prominent of the alternatives. Started in 2015, the app is already operating in Austin and a handful of other cities, though at a significantly smaller scale than Uber and Lyft.

Get Me has also made some rookie mistakes. Earlier this year, they sent out an email to over 500 Austin drivers without hiding any of the email addresses. And rather than meeting their drivers at a more formal location, they met in a parking lot behind a gas station to provide their insurance and license and banking information – which the company, in a typo-riddled Facebook post, later admitted "to some may have seen [sic] somewhat 'dodgy,'" adding that "were [sic] still learning and listening!"

While the Get Me app looks similar to Uber and Lyft's, the quality of its service is far from comparable at this point. While Uber took an average of three minutes to pick up Austinites, Get Me often struggles to match customers with drivers within 10 minutes – after which the app cancels the ride and tells the customer to start over. I've tried it a few times myself and have never been able to get matched with a ride. And, for the time being, Get Me's prices are reported by its riders to be significantly higher than Uber and Lyft's.

However, while disappointingly inefficient and expensive now, Get Me is growing very quickly; before the election, they only had a few hundred drivers in Austin, and now have over a thousand. Get Me says that they have an "expedited process" that takes less than two hours to approve drivers who used to work for Uber and Lyft.

There's also zTrip, an app that lets you book a black car or taxi, from services like 10/10 Taxi, SuperShuttle of Austin, and ExecuCar of Austin. As Billy Carter described it, "My company Carter Trans­port­a­tion Services Inc. holds an operating authority for a TNC license with the city of Austin as zTrip and we use the app to dispatch 10/10 Taxi, ExecuCar black cars." This app, while more formal, takes much longer than Uber and Lyft and is typically more expensive than even Get Me.

Another app, the West Coast-based Wingz, offers rides to and from Bergstrom Airport, as it does in other cities. It's more expensive than Uber, but cheaper than Yellow Cab. While currently only for rides to the airport, KUT has reported that Wingz aims to expand the service city-wide by the end of May.

Warp Ridesharing, created by Austin resident and web designer Ryan Brown, is also in the works. Brown told the Chronicle, "I think it's obvious that if both of the big TNCs operate in Austin, they will dominate the market, it's their idea and they've perfected it – so, my idea is that the best thing the companies trying to fill the space can do is put an interesting, beneficial, local twist and work really hard at making the technology function extremely well." Warp will comply with the new regulations, will take a lower commission from drivers, and will donate 25% of their profits to local nonprofits. However, Brown's chances of success seem low: The app is still incomplete, and at press time its Kickstarter only has seven backers, who have raised a total of $450. He admits, "It's definitely an uphill battle."

Yellow Cab also has an app of their own, "Hail a Cab." The app seems to be more reliable at this point than the other apps, but still not as reliable as Uber and Lyft, and definitely not as cheap.

There are other options for the carless as well. Car2Go has Smart cars parked around the city that are available for registered users to drive around at a price of 41 cents per minute.

For those wanting to use public transportation, Cap Metro offers an app to help users find the best bus or rail line to take to their destination, or to buy a bus pass using PayPal or a credit card.