I'm uncertain now whether, to many or even most Chronicle readers, the Vietnam War seems little more than ancient history. To the generation now aging out of public consciousness (my own), it was the formative experience of our young lives – along with the 1963 assassination of President John F. Kennedy, an event with which it's all tangled up in the mind. (Recent evidence: Stephen King's 2011 novel 11/22/63, and its Hulu adaptation, a strenuous attempt to reimagine stopping the assassination primarily as a way to prevent the Vietnam War – a fond illusion also beloved of Oliver Stone.)

These musings are prompted by the LBJ Library's Vietnam War Summit, a three-day program reconsidering the events of the war, almost exclusively from the U.S. perspective. I note the latter because the war didn't happen to us. We chose it as a country, via a political class that valued Western imperial continuation and U.S. military "credibility" above all other international values. The people we waged war upon – Vietnamese, Cambodians, Laotians, and others – had no say in the matter, and paid in the millions of lives, for a militarist adventure that cost us tens of thousands, and eventually the national and international "credibility" of U.S. motives that was allegedly the war's political justification. "After such knowledge," wrote T.S. Eliot in the aftermath of World War I, "what forgiveness?"

This essay is being written on Tuesday afternoon, while the first panels of the program are taking place, and they have already brought very mixed emotions. The first – "Commanders-in-Chief" – featured historian H.W. Brands with a couple of presidential aides (Nixon's Alexander Butterfield, LBJ's Tom Johnson) who thought it their business still to defend their bosses' sanguinary decisions and the war itself as a holding action against international communism. Brands was a bit more nuanced – not swallowing entirely the political mythologies offered by the others – but one was left with the impression, once again, that the central narrative of the war was the difficult moral predicament of Western officials.

That was followed by a panel of U.S. Army veterans, who told soldiers' stories like those of soldiers always and everywhere. As very young men, they endured terrible and terrifying hardships, lost many of their fellows, did what they could to survive, and now live with the physical and psychic burdens of what happened to them. Many years ago, I visited a small museum on the border of England and Scotland, containing a few mementos and letters of the Roman soldiers who sojourned there centuries ago, at the furthest extremity of the Empire. They missed their families, they feared the resentful or rebellious locals, they wanted warm socks. War is an experience of endless tedium irregularly interrupted by terror.

The U.S. veterans also complained of a supposed North Vietnamese "sanctuary" in Cambodia – where North Vietnamese Army soldiers allegedly could not be pursued over the border. They failed to mention Richard Nixon's "secret bombing" of Cambodia (secret to U.S. media, no secret to the Cambodians), which from 1969 to 1973 dropped more munitions on that largely rural country than were used in the entire Pacific theatre of World War II. Nixon and his Joint Chiefs were convinced an imaginary NVA headquarters could be destroyed in Cambodia – instead, they destroyed much of the fabric of Cambodian life, creating a vacuum that was filled by yet another U.S. legacy, the deranged and murderous Khmer Rouge.

The Summit recruited as its Tuesday night featured guest one of the architects of that mass bombing, Henry Kissinger, notorious for transmitting his version of Nixon's order ("I want them to hit everything") concerning Cambodia. "Anything that flies," echoed Kissinger, "on anything that moves."

And so it was done – just one massively vicious episode in an extraordinarily irrational and unjust war. I have no particular stomach to hear an un-indicted Kissinger explain himself again, recalling instead one of Christopher Hitchens' more sensible judgments: "Kissinger should have the door shut in his face by every decent person and should be shamed, ostracized, and excluded. No more dinners in his honor; no more respectful audiences for his absurdly overpriced public appearances; no more smirking photographs with hostesses and celebrities; no more soliciting of his worthless opinions by sycophantic editors and producers."

This appearance has been billed by the LBJ School as possibly Kissinger's "last time addressing his role in the Vietnam War." I very much doubt that he will be begging for forgiveness, the only posture that could possibly begin to retrieve his humanity – for crimes of realpolitik in Indonesia and Chile as well as Vietnam.

Wrenching back to the present: John Pilger, among others, has pointed out the contemporary echoes of Cambodia in the Middle East. "Like Pol Pot and the Khmer Rouge," he wrote in 2014, "ISIS are the mutations of a western state terror dispensed by a venal imperial elite undeterred by the consequences of actions taken at great remove in distance and culture."

I wish I could say that, as Americans, we learned our necessary lessons from the Vietnam War. I see precious little evidence that is so. 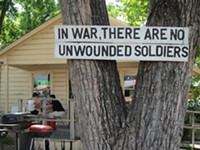 Under the Hood Celebrates Hoodstock at JAX
On the 11th anniversary of war in Afghanistan, help a military resource center stay afloat 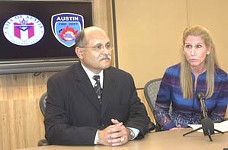