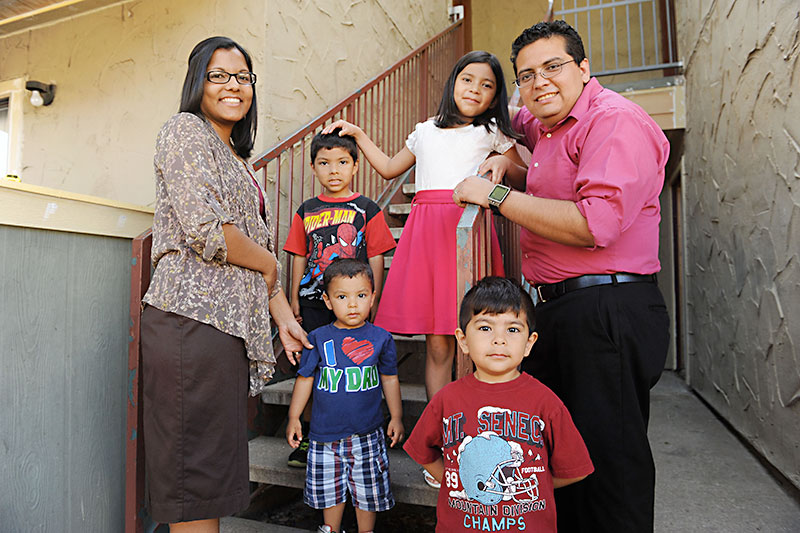 The Aguilars at Woodland Heights (Photo by John Anderson)

Georgian Acres is not yet a fashionable part of Austin. But for Rocio Aguilar, her husband Yeyn, and their four small children, it's where they want to live. Being close by the elementary school where Yeyn teaches first grade, and the church where both of the Aguilars volunteer, is important. Yeyn likes that he lives in the same apartment complex as many of his students – he's not just their teacher, he's part of their community.

Since 2013, Yeyn has been living at the Woodland Heights apartment complex, located off I-35 near Rundberg. He moved there from the Aguilars' home in El Paso to take his current job. Rocio stayed behind with the kids to tie up loose ends. When Rocio and the kids moved to Austin at the beginning of 2015, they asked if they needed to fill out a new lease listing the children, but they say they were told by management it wasn't necessary. 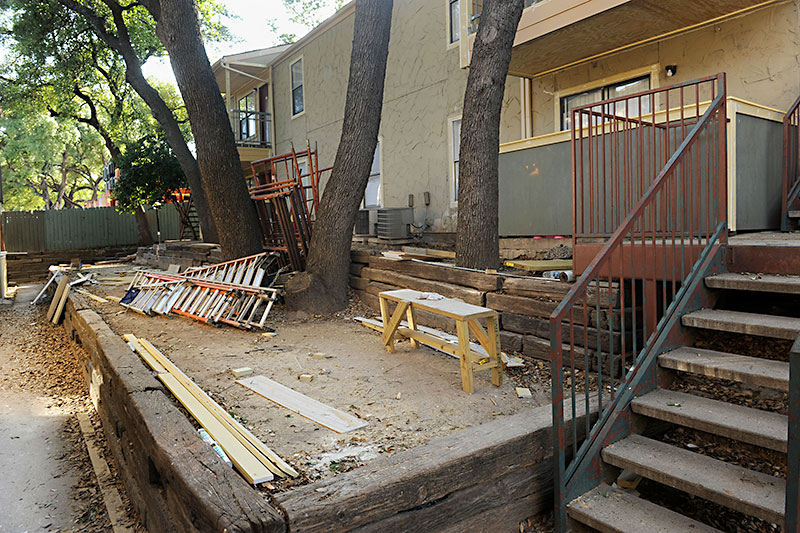 Last December, the couple were horrified to discover black mold growing on a wall behind their children's bed. The Aguilars had noticed that there was moisture on the windowsills after it rained before, and had mentioned it to the complex's manager, but the sight of the mold – which spanned the entire length of where the bed had been against the wall, and on closer inspection, was in the carpet and on the legs of the bedroom furniture – prompted the Aguilars to demand immediate action. Since the windows were letting in moisture, the Aguilars believed they should be replaced.

After much back and forth, management finally decided to replace the windows, a process that wound up involving removing the Sheetrock on the walls. The family was offered no alternative accommodations while the apartment was being repaired. Living on Yeyn's teaching salary, they couldn't afford to rent a hotel, and so managed as best they could, sleeping in their living room, and then on the floor of a building belonging to their church.

The repairs were completely botched, according to the Aguilars. The new windows, instead of leaking slightly, allowed water to flood into the house when it rained. Naturally, they requested they be redone properly – but Yeyn said the manager told him it wouldn't be possible to fix, because it was a "structural" problem. 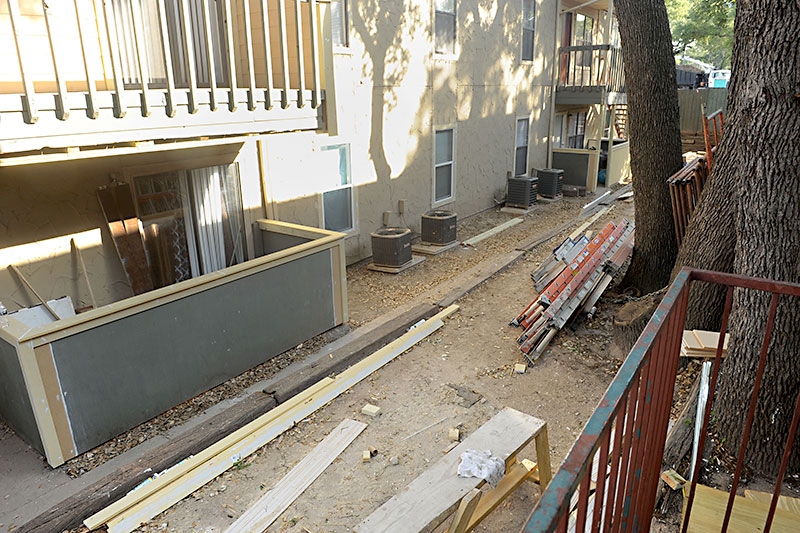 The situation was profoundly frustrating to the Aguilars, who felt that their initial request – a mold-free apartment – was within their rights as tenants. But their complaints ultimately resulted in a notice to vacate, saying they'd violated their lease by failing to disclose that their children were living in the apartment.

The Aguilars find that claim laughable. Not only, they say, did they ask about putting the kids on the lease and were told not to worry, but the apartment's current manager, Nicholas Haigh, lived in the same building, and would see the Aguilars with their kids regularly.

Now the Aguilars are in court, both plaintiffs in a suit demanding repairs and damages for retaliation, and defendants in an eviction filed against them. (While evictions usually are heard by the Justice of the Peace, because of the multiple filings, both sides have agreed to combine the cases and go before a Travis County Court judge.) 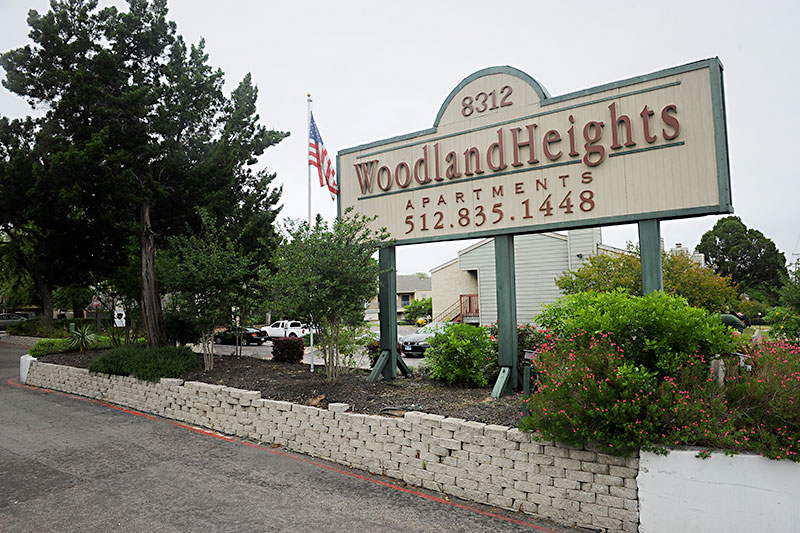 The Aguilars were referred to Texas RioGrande Legal Aid after their pastor suggested they reach out to City Council Member Greg Casar's office. Because the Aguilars described their experience as part of a pattern of mistreatment, they were encouraged to try to form a tenant's association as well as seek legal recourse. Many of Woodland Heights' residents are immigrants, and are unlikely to feel confident in complaining to or about the complex's management. And Yeyn says he sees the effect of Austin's brutal rental market in his classroom: Many students come and go throughout the school year because of a lack of permanent housing.

With help from Casar's office and the BASTA program (see "Fighting to Stay," April 15), the family passed out fliers around the complex and held an initial meeting. Yeyn says they heard around 25 complaints at that first meeting – "the situation is pretty bad." Maintaining the association has been difficult, though; the apartment's manager has claimed that the Aguilars are barred from speaking with other tenants because of the impending litigation. 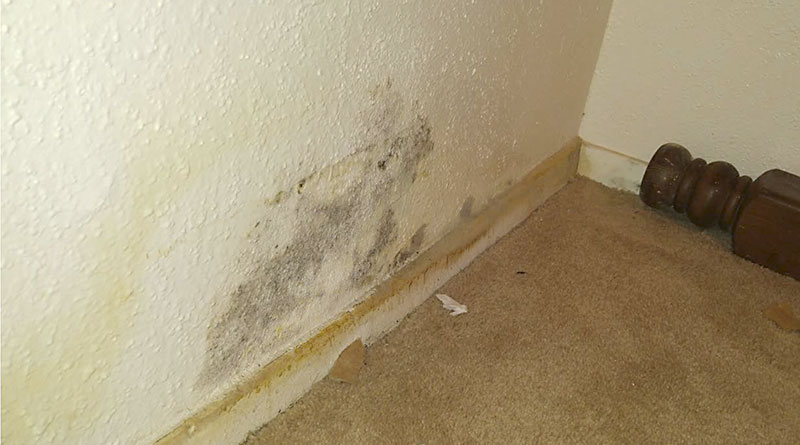 Conditions inside the Aguilar's apartment (Photo courtesy of The Aguilar Family)

But a quick search for Woodland Heights online turns up complaints that echo what the Aguilars say they and others experienced. A post by Faye Campbell on Google Reviews encapsulates a few complaints at once – unexplained charges (the complex sends its own bills for utilities); locks changed without warning; and possessions taken shortly after tenants receive notice of unpaid balances: "Just when I think this place can't get any worse. I have 2 weeks left at this hell hole and all of a sudden I have $150 balance?? ... I received the notice at 11:00am to pay it that day, and by 4:00pm (the same day) I was locked out and my TV was gone!" (BASTA director Shoshana Krieger says that it is possible for a landlord to legally take a tenant's belongings as a lien on unpaid rent, but that there's a very specific procedure that must be followed.) Campbell tells the Chronicle that "I just didn't know what else to do," other than post her review and move.

(When asked if he had any comment on the allegations, Haigh referred me to the corporate office. At press time, the Chronicle had not received a response to its request for comment from that office.)

Juliana Gonzales, executive director of Austin Tenants' Council, says Woodland Heights is not an isolated case: "Retaliation is an incredibly big issue in terms of tenants seeking repairs." The rental market in Austin is so competitive that even fear of a landlord not renewing a lease can be intimidating to a tenant who might otherwise request repairs. 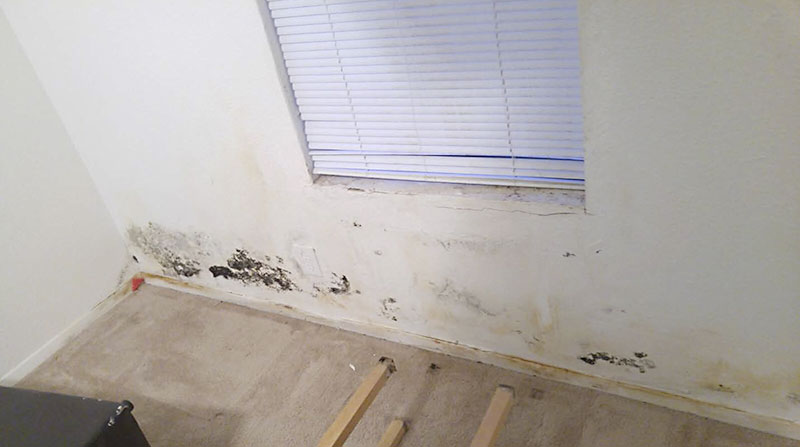 Any eviction proceeding filed, even if the outcome is favorable to the tenant, says Gonzales, can make it more difficult to find housing in an "already formidably difficult" market. Furthermore, Texas property code was not designed in a way that feels particularly tenant-friendly, Gonzales explains. She says a tenant's best bet is to make sure they're keeping in good standing on their lease, document all requests for repairs in writing, and collect proof that those requests have been received. Tenants can get help figuring out the correct way to go about requesting repairs from the Austin Tenants' Council.

The Aguilars hope that their fight will help other tenants who might be too scared to speak out. "The best way we can make any difference is by caring," says Rocio.