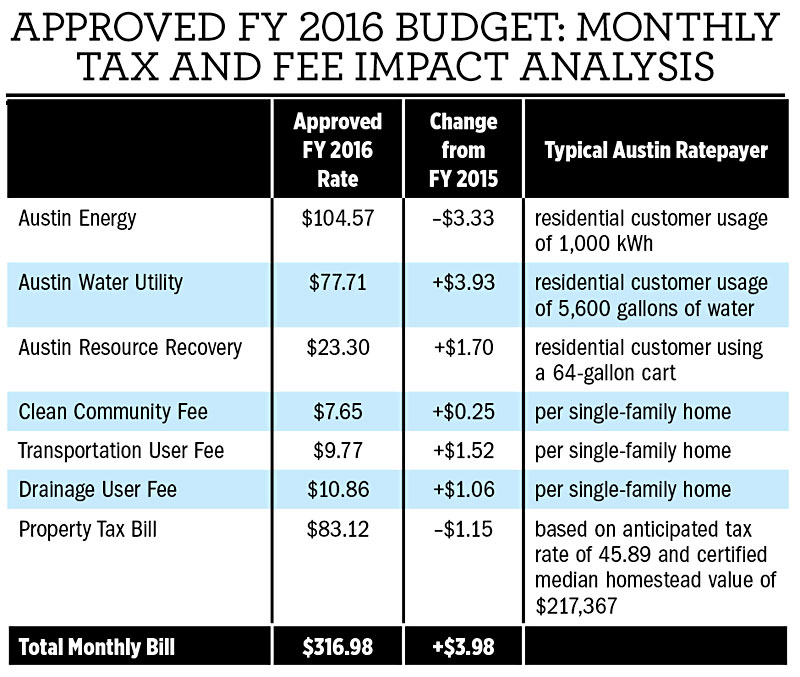 Let's start with the big numbers.

Last Thursday, with rather less exhaustion than might have been anticipated, City Council adopted the FY 2016 city budget, a landmark moment for the new 10-1 Council. The "All Funds" budget is – as anticipated – roughly $3.5 billion, but that grand total is a bit misleading, because it includes all the "enterprise" (income-generating) departments, not only those funded by property and sales taxes. Most of the sweating and straining over the three days of budget readings (and the weeks of departmental presentations that preceded them) was over the General Funds budget – about 22% of that $3.5 billion – proposed at $906.7 million, and (when the calculators cool) likely to be around that amount.

The big change that occurred in late August was the announcement of the certified tax roll by the Travis Central Apprais­al District: $111.1 billion in taxable property value, or $4.9 billion more than the original estimate, for an astonishing 12.5% growth rate over FY 2015. That meant council members and budgeteers could achieve the departmental budget proposals with a good deal less angst, and – importantly – could lower the property tax rate to get there. Since we've been in boom times for several years, a rate cut is not unprecedented – the difference this year is that the rate cut also meant a reduction in the actual median tax bill, initially about $12 over the year for the "median" homeowner (about $217,000). No one – not even budget guru Ed Van Eenoo – could remember when that last happened: Mayor Steve Adler described it as the "growth dividend" and "the rising tide of growth [that] should lift all boats."

Civic boosterism aside, it was welcome news, and it meant that budget proposals simmering on the council dais could be brought to a steady boil. Departmental presentations and a week of straw votes reflected considerable sentiment on the dais for additional funding for the traditional budgetary stepchildren: health and human services, job training and educational programs, parks and libraries. It was never unanimous – Council Members Don Zim­mer­man and Ellen Troxclair were consistent nays on virtually all spending, often joined by Sheri Gallo – but a varying majority took the growth dividend and ran with it.

• A significant increase in health and human services funding, of at least $7 million (the exact number depends on the definition of programs – the next day, the mayor cited "$12 million" as the overall total).

• A $13.03 base living wage for all city employees, including temporary and part-time (with health care) (see "Setting an Example," p.22).

• And while (for a change) Austin Police Chief Art Acevedo didn't get everything he originally requested, APD will hire 50 new officers (instead of 82), and $3 million will fund the initial acquisition of body cameras and at least enough data storage to begin using them.

All these and more were priority matters for grassroots coalition Austin Interfaith and social service advocates One Voice Central Texas, along with additional funding for Capital IDEA (job training), AISD parent-support specialists and afterschool programs, extended library hours, and additional funding for parks, pools, and libraries. At a hastily arranged post-budget press conference Friday, AI leader Kurt Cadena-Mitchell and others congratulated Mayor Adler and council members, and the mayor and colleagues were happy to accept the cheers. Adler called it "a budget to be celebrated ... that reflects the values of a city that cares."

Greg Casar called the budget an opportunity to "redesign and reshape the city's future," and thanked Ann Kitchen for her dedication to extending health care benefits to more than 900 additional city employees. In her turn, Kitchen thanked Mayor Adler as a "true leader" in his management of the budget process, and said Council had accomplished its overall objectives "as a team." Leslie Pool called particular attention to the additional funding allocated to parks, rec centers, and libraries, and thanked the assembled activists for their work in reaching out across the city and bringing that advocacy before the dais.

On the perennial question of "What's it gonna cost me?" the answer was mixed. Although property taxes will decline somewhat, as will Austin Energy rates (a median decline of $3.33 monthly), other fees (see box) are rising enough to produce an overall $3.98 monthly increase. It might have been slightly more, but for a late motion by Troxclair to allocate a $1 million in one-time reserve funds to reducing the property tax rate to 45.89 cents per $100 value – slightly less than the 45.98 rate that resulted from rising property values (the current rate is 48.09). Over an objection from Pool that the additional rate cut would also mean a reduction in next year's rollback rate – "tying Council's hands for next year's budget" – a 6-5 vote bumped the annual tax cut to $14.00. Adler, Kitchen, and Ora Houston joined the conservatives in voting for the $2 lagniappe – $1 million in the budget for roughly 17 cents a month per median homeowner.

In a last bit of irony, an initial vote to approve the budget passed 10-1, only Zim­mer­man dissenting. After apparently consulting with her staff, Troxclair changed her vote to no – saying, "I was reminded of a pledge I took to not support a budget that isn't at the effective tax rate" (the same revenue as last year, adding only new construction). A million bucks in throwaway money wasn't enough to change her mind.

A version of this article appeared in print on September 18, 2015 with the headline: Where the Money Went