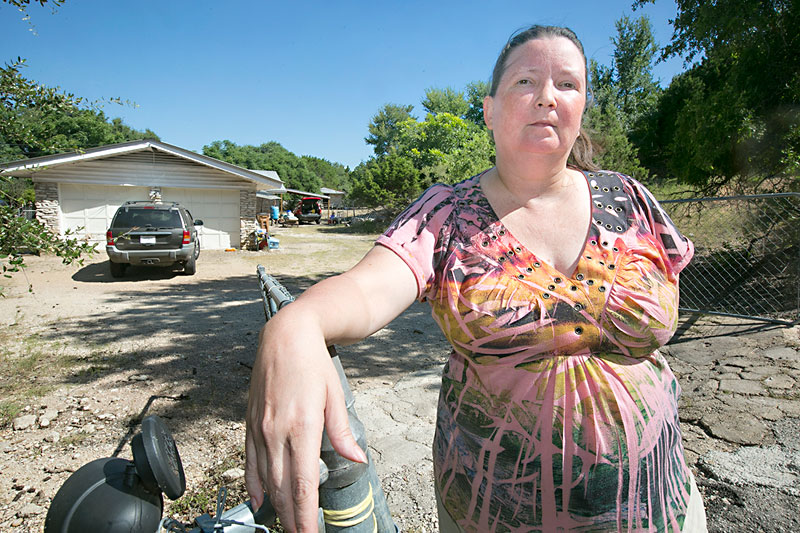 Crystal Bomer, whose house would stand within two feet of the proposed Oak Hill Parkway's right-of-way (Photo by Jana Birchum)

Oak Hill residents are gearing up to fight Texas Department of Transportation's recommended design for relieving traffic congestion at the intersection of U.S. 290 and SH 71, known as the "Y" in Oak Hill. The design is called Oak Hill Parkway, but residents say "parkway" is a misnomer: They characterize it as a super-highway that could end up tearing apart their community.

In order to try to stop the project from moving forward, the residents have formed a coalition called "Save Oak Hill." Members are talking to media and going door to door, handing out fliers to neighbors to increase awareness. They've developed a website with extensive research on the impact the highway would have on the community and the environment, including historic trees and Williamson Creek. And group members have made presentations to TxDOT offering innovative alternative traffic congestion solutions.

Many residents who have made Oak Hill home for decades would be devastated if the highway project is built. Crystal Bomer and her husband have lived in Oak Hill for 20 years. Talking with TxDOT engineers at public meetings, Bomer learned that the recommended highway design has the right-of-way coming within two feet of their front door.

The Bomers' home sits back off the road on their 1.3 acres of land. They enjoy their animals – miniature goats, donkeys, and dogs. Their used-car business is also on the property. They love the Oak Hill community, the short drive into Austin, and their privacy on the land. "This is where we planned on retiring," Crystal said. "Now they want to take our home where we wanted to live for the rest of our lives." Bomer doesn't expect to find anything comparable to what they have close to Austin.

Similarly, Carol Cespedes has lived in the community for 21 years and has played a major role in organizing Save Oak Hill. She said TxDOT's engineering-accepted way of solving the traffic congestion is likely to destroy the core of Oak Hill and the community's character. "TxDOT has owned up to the fact that they are going to pretty much destroy every heritage oak tree except two: Grandmother Oak because she's famous – she's more than 300 years old – and the Taco Bell tree that was moved because of the neighborhood campaign last fall," she said. (The 100-year-old historic tree was named by locals for its proximity to a former Taco Bell; it has since been renamed Beckett Grove Oak.)

Another longtime resident, Alan Watts, moved to Oak Hill in 1999. He found an old ranch on the edge of the Hill Country with beautiful trees. "It didn't feel like Austin at all," he recalls. Watts has been involved with the Oak Hill Neighborhood Planning Contact Team since 2006, when he heard about plans to build a parkway through Oak Hill. He recently resurrected the Save Oak Hill website when he learned that TxDOT's recommended solution for solving traffic congestion is a six-lane tolled turnpike through the area.

Because Texas law requires an equal number of free lanes when a road is converted into a toll road, Oak Hill Parkway could be at least 12 lanes in some places – three miles of the highway could be as wide as a football field. If TxDOT's recommended design is built, it would take out most of the heritage oak trees, and sandwich Wil­liamson Creek between two elevated roads.

Watts is a hiker and backpacker. On a beautiful Sunday afternoon in February, he decided to do a walkabout in the area that would be most impacted by the highway. He parked at Austin Pizza Garden and walked around both sides of U.S. 290. He explored the tree groves that would be destroyed and the part of Williamson Creek that would be saddled between two elevated roads. "I was totally amazed that it was so beautiful here next to the highway. When you're driving through, you don't really stop and see the trees and notice the beauty that's right here."

Watts called his walkabout an eye-opening experience that gave him the vision to expand the Save Oak Hill website to include information about the natural beauty and heritage that will be lost if the Oak Hill Parkway is built. (The site also includes research he's done on elevated highways and toll roads.) The area has high potential for being developed into a greenbelt and providing some of the much-needed parkland for Oak Hill. "I found an original study the city did back in 1985 that said this stretch of the creek was the optimal space for a greenbelt extension," Watts said. "They had a vision that they would have a trail connecting all the way down the creek to the other neighborhood parks."

The Oak Hill Parkway environmental study is evaluating three alternatives, including a "no build" scenario. These are the two construction options.

TxDOT Public Information Officer Kelli Reyna said that an environmental study is being conducted for Oak Hill Parkway, and offered a reminder that the parkway is not a certainty. "Nothing is final at this point," she said. "There is not even a guarantee that anything will be built here." The environmental study is evaluating three alternatives: building the U.S. 290 main lanes either over or under SH 71, or a third, "no build" alternative, in which none of the proposed improvements would be constructed.

Reyna confirmed that a conventional controlled access highway is being considered. The new capacity would be a toll road, because the project is described in the CAMPO 2040 plan as "a six-lane tolled turnpike with frontage roads," though Reyna added that it doesn't have to be a toll road, if other funding is available.

Reyna said TxDOT is trying to be sensitive to the neighborhood. "We are talking to the property owners a full year away from the end of the environmental study," she said. "The whole point of that is to see if we can make adjustments to the proposed project. We do still have the ability to make changes or modifications." TxDOT has held five open houses as well as virtual open houses, 28 stakeholder meetings, and 10 workshops engaging smaller groups on specific issues.

But Watts described TxDOT's proposed design as an extremely over-built project for a problem that doesn't necessitate the scales nor the environmental destruction and other negative impacts on Oak Hill. "TxDOT is trying to design a 24-hour solution for a six-hour problem," he said. "We do have bad traffic, there's no doubt about that, but it's a very directional rush hour traffic problem."

Recently, Watts made a presentation to TxDOT. He noted concerns with the elevated highways in recommended designs. He said some cities are tearing them down because of noise pollution and blight, as well as the visual and psychological barrier they create. He also noted that elevated highways would be damaging to local business and property values. They're also more expensive to build and more dangerous in inclement weather.

He offered innovative traffic congestion solutions that include a comprehensive multimodal transportation system that helps reduce road use, along with technologies other cities are using such as reversible lane control, variable speed limits, and adaptive signal control.

Watts also described the Smart Mobility at-grade parkway proposal that would increase capacity to meet CAMPO 2030 daily traffic projections for Oak Hill. At much less cost for infrastructure, this parkway would provide greater long-term benefits that include a more highly connected street network. It would promote more compact, transit-oriented development, and allow for conservation and recreational opportunities along Williamson Creek with bicycle and pedestrian transportation access. 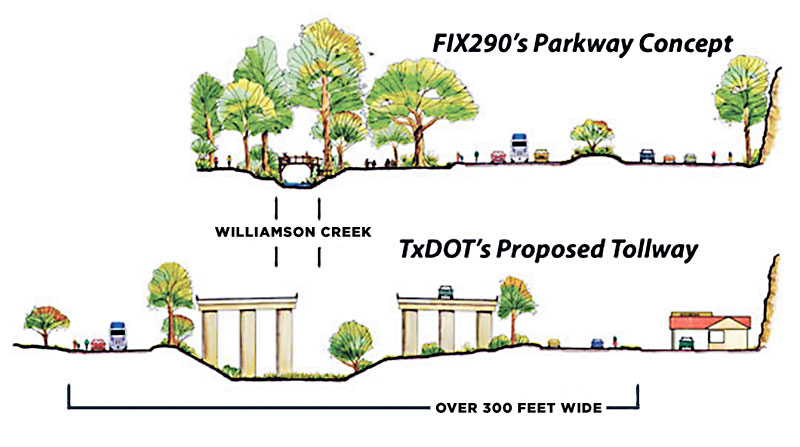 Watts is concerned that TxDOT's proposed plans take the entire right-of-way, limiting future transportation solutions. "It's a 350-foot highway – at its widest, it's 16 lanes. So it automatically cuts out any kind of future alternative and assumes we are always going to have this car-centric driving culture," he said. "We're kicking the can down the road and saying, 'Here, Dripping Springs, you can deal with it when they decide to build these elevated roads through your community.'"

Watts and other Save Oak Hill members say it's hard to get TxDOT to seriously consider their suggestions for easing traffic congestion. They're creating a nonprofit fund to hire an experienced human-scale traffic engineer to help them make their case for better traffic solutions.

Andrea Street, a Save Oak Hill member, is working to get the word out about Oak Hill Parkway and the impact it could have on the community. She's contacting media, going door-to-door with fliers, and planning a rally in August at the Oak Hill Y to raise awareness. "We'll do our best to do what we can to save Oak Hill, and that's what it's all about," she said. "It's a beautiful place. It's too soon to tell, but I don't know if I would want to live out there if they take all those trees and change it forever."

See the current TxDOT proposal at www.oakhillparkway.com, and the opposition views at www.fix290.org and www.saveoakhill.org.

A version of this article appeared in print on July 31, 2015 with the headline: Paving Over Paradise to Put Up a Parkway 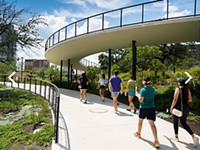 Public Notice: What Have They Done to Our Park?
What’s left of Waterloo can’t even be called a park 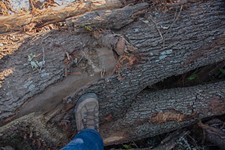 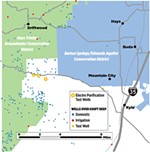